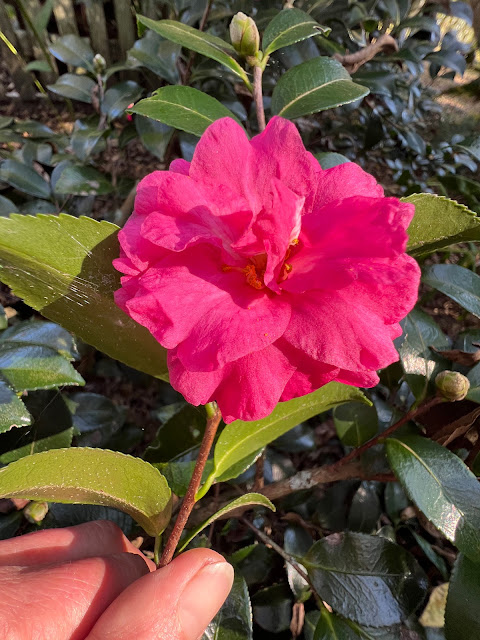 My own sasanguas are blooming now. They don't get enough sun to be early bloomers like my neighbors' but they are beautiful and soon the camellia japonicas will begin blooming and they are the most beautiful of all.

Because I am going to the beach for the weekend and it is far too late to lose thirty pounds and/or get plastic surgery, I decided to get a pedicure. Jessie and Lily were able to meet me and we had a great time, as we always do, chitter-chattering, our feet and calves being attended to, our toenails made pretty. I always feel like new feet have been revealed to me after a pedicure. I am rough on my feet as are we all, really. Feet are miracles in my opinion. They are asked to do so much throughout our lives and we do so little to show our appreciation for them.

After we were all prettified, Lily went off to do errands and Jessie and I went to Costco and then had lunch at the seafood restaurant in the same complex of shops and stores and it was good as it always is.

One of the things I really missed in Denver was seafood. This was before I became a vegetarian, of course. But I had never realized how much fish we ate in Florida. The cafeteria in the dorm served glorified fish sticks which was pretty disgusting and I remember getting trout in a restaurant once. It came with hushpuppies and I truly wanted to go into the kitchen and show the cook how they were supposed to be made. Ironically, I do not even now make very good hushpuppies but I guess I had a high opinion of my abilities at that point.

I was homesick. Not in the sense that I missed my family home- far from it. Home was what I had escaped from with the horrible man who had abused me and who, even after he stopped, made me feel threatened and vulnerable every day of my life. He abused my mother with gaslighting and he abused my brothers with his cold creepiness. And my mother, as unhappy as a woman could be, swallowed it all and carried on, going through bouts of depression herself, many of which led to her spending days in bed, often with vague physical ailments. I loved my little brothers and I had many, many dreams of rescuing them and I felt incredibly guilty about leaving them when I went off to Denver but it was go or die and I chose to go.

But yes, I was homesick. For fresh fish and for large bodies of water, salty and sweet, for trees and flowers and people who didn't laugh at my accent. I was homesick for those friends who had been my true family and I was grieving for that boy. I wanted to be loved so much. When someone is sexually abused, they learn in a most literal perverted way that their power is in their sexuality. At least that's how it was for me. And I had already lost all my innocence at this point and it was the early days of the pill being available and there was no AIDS or herpes and well...sex was just sex.
I had a friend once who called having sex with lots of guys "random sampling" and in a lot of ways, that's what it was like. At best, some of the sex I was having was vaguely pleasant. At worst it was just...nothing. And the boys who thought it might lead to something more romantic were never the boys I wanted.
I am not ashamed of any of that. As I said before, I know exactly why I acted the way I acted and honestly, it wasn't that different from how anyone acted. I remember a girl in my dorm who had joined a sorority and scored a relationship with one of the guys high up in a fraternity asking me for sexual advice so that he didn't get bored and uninterested.
Strangely, this question mystified me. If they really cared about each other, wouldn't the sex just be grand no matter what? It had been with my first boyfriend. The one I had loved.
Ah well. Perhaps I should have had a few tricks up my sleeve when I was with him, too. Perhaps he would have stayed faithful and true if I had.
But I doubt it.

But back to being homesick- I realized I was homesick for things I didn't know I had loved. I had always hated country music. Just hated it. The stepfather had been a big fan and I associated it with him. But once I went over to some people's house and they had a copy of "Will the Circle Be Unbroken" by The Nitty Gritty Dirt band and for those of you who do not know, these young guys sought out some of the most venerable bluegrass musicians and asked them to play with them on an album. Vassar Clements played and Bill Monroe, Mother Maybelle Carter, Earl and Randy Scruggs and so many more and somehow, some way, when I first heard those songs with mandolins and banjos, auto harp and guitar, something inside of me, some knot of grief and love and authenticity broke and I cried and cried.
Music has always been important to me and I have said that in some cases, it has saved my life. That is the truth. And I don't know if this album saved my life but it gave me a piece of myself back that I had been hiding without even knowing it and that, too, was part of my ultimate decision to leave.
I had no idea I would react that way to this music and it wasn't just the music. It was the voices of the musicians who had been recorded discussing arrangements and parts. Their deep accents soothed my soul and I felt like I could fall back on them and rest.
Up 'til then, it had always been rock and roll for me. And there is no mystery about that OR about how this roots music affected me. As Keith Richards once said, "Country music and the blues had a baby and they called it rock and roll."

Or something like that.
And it was also around this time that I found and fell in love with B.B. King, whom I love to call my daddy.

So the cold winters and the people who seemed so exotic and foreign and fascinating to me began to wear down my soul. I took ice skating as a physical education requirement and the only person who was as bad as me in the class was a girl from Hawaii whom I could hear crying in her dorm room next to mine. If I was an alien from a different planet in Colorado, what was she? I still think of her. I still remember her name.

But was there a way to go "home" without going home? I couldn't figure it out. And so I just kept on with it and kept trying to figure out how to make a life that was bearable in this place and I found myself, like my mother before me, spending hours in bed. I went to see a psychiatrist who was an advisor for the Open Clinic and I'll never forget him asking me if I wouldn't be happier if I lost some weight. And oh, y'all. I was not fat. I was beautiful. And when I finally made the decision to leave and told him, he warned me that leaving Denver to go back to Florida might sound great but it wasn't going to make me any happier.
Thanks, Dr. Whatever-Your-Bullshit-Name-Was!

Tomorrow I'll try to write about how I found my ticket out.

Oh! Here are the greens I picked for our supper tonight. 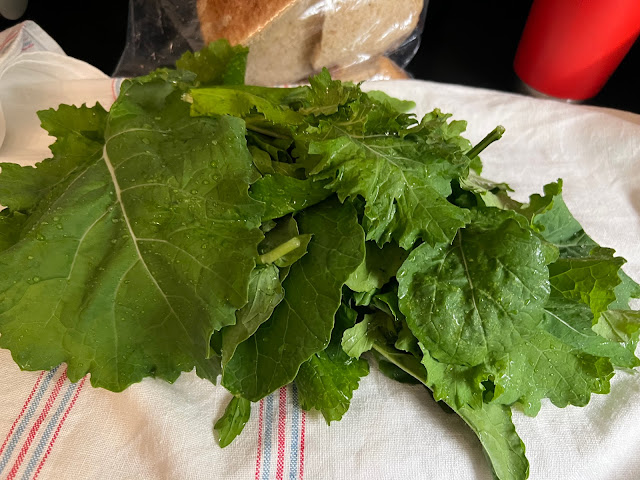 They are no longer micro-greens but they are still tender and delicious, eaten raw. 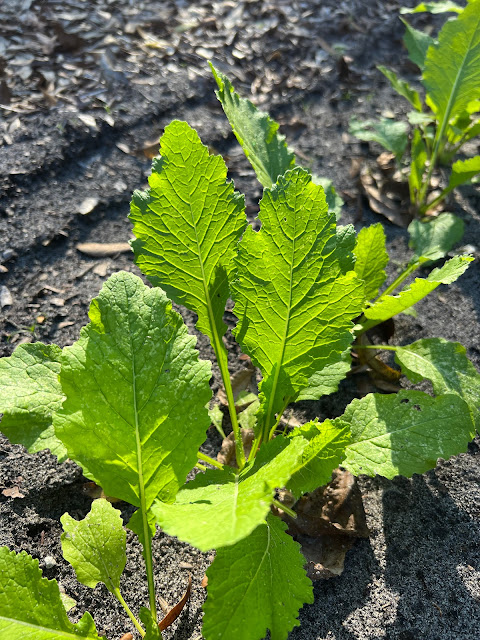 Turnip greens with the sun shining behind them as it sets.
One last thing- Mother Maybelle Carter. And others. It can still make me weep to listen to it.
Love...Ms. Moon
Posted by Ms. Moon at 6:22 PM