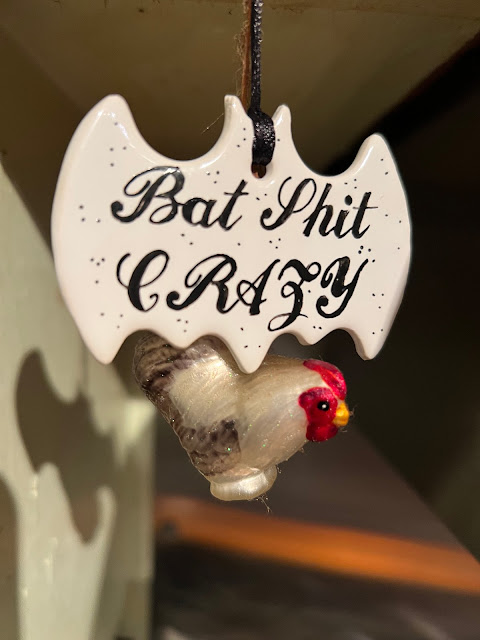 Sweet Lynda from across the pond sent me that lovely bat-shit-crazy bat and I have hung it in my kitchen to the left of the stove with a little chicken ornament who watches over my cooking efforts. It fits in with my decor perfectly.
And for those of you who don't get the reference, I have often said that I am a member of the Church of the Batshit Crazy and that we have services here frequently.

This morning was a bit of an experience. I woke up from a dream that had been horrible and yet, I had to admire my brain for tying all of the fear element themes together that I regularly dream of in such a connected narrative. It was pretty amazing. The fear elements, as I called them, included worry over my family and all of its members individually and as a group, worry over me accidentally or in some other way, losing any members of my family, worry over Mr. Moon working himself too hard (and the resulting possibilities which I cannot bring myself to discuss), anxiety about crowds of people (the whole dream was set at a fair), and worry over Thanksgiving.
I thought that after I bought the two dang turkeys those dreams would go away but it would seem not. In the dream things kept happening and it was Thanksgiving Eve and I knew that all I had to cook were like two packages of wilted celery and carrots AND I knew I would be cooking in that strange and filthy and funky kitchen that shows up in my dreams that has about five stoves, all of them with only bits and pieces that work, and so forth.
Right before I woke up, I had said in the dream, "Will this nightmare NEVER end?" which is sort of funny.
Oh, you silly brain of mine. You do like to mess with me.

So yes. I woke up from that and then in an hour or so, just as I was starting to pull myself out of the nightmare, I got a group text from Hank who was in the ER, Rachel at his side, with AFib, which he does  get from time to time. They ended up sending him home, still in AFib, with instructions to come back if his pulse got and stayed over 100 bpm which was reassuring and yet, not really.

But then it was time to go pick up Levon and knowing that Hank was going home to rest with Rachel there to tend to him, I ran to the FGDDG store where I bought two Spider Man coloring books and a pack of many Crayola washable markers to take to the boys. How I started this habit of always taking them something is a question I ask myself. But here we are and I packed up those and two York peppermint patties and a package of malt crackers with peanut butter for them both along with some books and leftovers from last night for my lunch and a New Yorker magazine and zipped over to Temple Israel preschool where Levon appeared wearing shorts, flip-flops, and a very-well padded jacket with a hood. He is dressing himself these days and refused to wear the long pants and shoes that thirty-six-degree weather would call for. Vergil had packed those things in his bag but he wanted nothing to do with him. As I took his hand to walk him to the car, I said, "Your hand is so cold!"
"And yours is so warm!" he said.
I was wearing corduroy overalls, my new Goodwill long-sleeved t-shirt and new Goodwill long-sleeved sweater. And shoes and socks. And felt quite cozy.
That boy.
He inquired as to whether or not I was going to buy him a toy and I told him that I'd already gotten him and August something and told him what I'd brought and he seemed to be fine with all of that.
He colored while I ate my lunch and then we read some books and then he wanted to go out and jump on the trampoline for awhile.

I took a video and I swear I CANNOT figure out how to get a video from my phone (and subsequently my MacBook) onto my blog. I used to be able to do it by uploading videos to Youtube and copying the embedding code from there but I am no longer getting the Youtube option when I try to share the video. It's just something I have to figure out and I think I can if I prioritize the time to do it. What I wanted to share was Levon doing flips that amazed me that he's been learning in gymnastics.
I was, quite frankly, stunned.
You'll just have to take my word, I guess.

And then it was time to go get August and he hugged me when I picked him up. I have come to cherish these hugs so much.
He, too, asked if I'd brought them anything and I laughed and said, "You and your brother always ask the same thing. Did you ask Boppy if he'd brought you treats when he picked you up?"
"Yes," August said.
"And what did he say?" I asked.
"That our treat was him."

I laughed some more and told him what I'd brought and he, too, was satisfied. They both colored some in their Spider Man coloring books and allowed me to do a little coloring too. Then I told them about one of the scariest things I ever did which was to climb steps inside of Chichen Itza to see a jade jaguar throne in a hidden chamber and I showed them pictures of Chichen Itza and of the jaguar and tried to make the story as scary as it had really been for me and I swear- I do not know what those children think of me. Am I interesting to them? Do they think I'm insane?
I have no idea but they definitely know I love them and that I am as apt to laugh at fart and butt jokes as they are.
Obviously, I got no pictures but again- you'll just have to take my word on the fact that they are as adorable as ever.
It did appear that Levon had trimmed his own hair. I asked him about that.
"Did you cut your hair?" I asked. At first he said no, but then he said that yes, he had.
"Just wanted a new look?" I asked.
"Yeah," he said.
"I hear you," I told him.

And I really do.

Here is a picture of the jade jaguar within the pyramid of Chichen Itza with an obviously translated description. 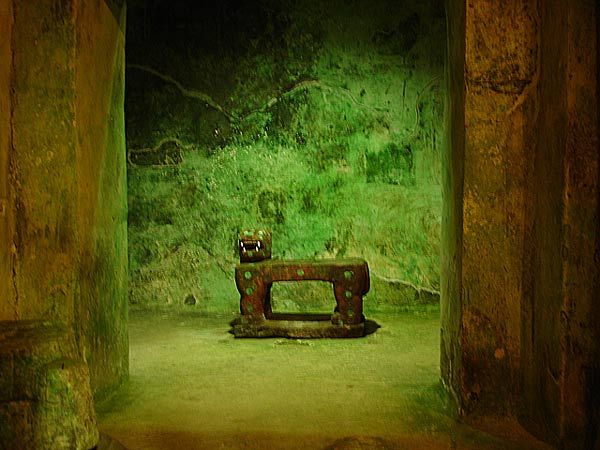 In the 1930s, however, a group of excavators began exploring and discovered that another pyramid temple was nestled within the larger pyramid. further excavations revealed that it had nine platforms, a single stairway, and a temple containing human remains, a jade studded jaguar throne, and a so called chac mool. Scientists have found a second pyramid hidden deep within the kukulkan pyramid at the mayan ruins of chichen itza in mexico. researchers announced the discovery wednesday of a pyramid 10 meters. Chichen itza is the largest city in the state of yuuk'atan and the second largest in the aztec empire. often abbreviated as c.i. and nicknamed the city of palaces, chichen itza is rated an alpha world city, has an estimated population of 6.8 million and spans over 498.3 sq mi (1290.6 sq km). The jade jaguar throne inside the chichen itza pyramid, mexico no flash allowed, so this is an ambient light photo (and there wasn't much light). and iron bars keep you at a safe distance from it. the throne is red, with jade spots.

Uh-huh. That's right. Teeny tiny steep steps with no light except for some extremely inadequate electric LED lights and absolutely no ventilation.
Talk about your nightmare.
Plus- I'll bet anything that that's a replica of the throne. The Maya weren't stupid when they built Chichen Itza and they aren't stupid now.
I, however, was a complete idiot for thinking that climbing those tiny, steep, dark, airless steps was a good idea.

Mr. Moon will be home late, late, late tomorrow night. Plane arriving at midnight. And then he will have to get an Uber to the Weatherford's to pick up his car and then drive to Lloyd.
Sigh.
I will make him biscuits on Sunday. I will be so glad he is home.