In Which Fruitcakes Are Made And Bruce Springsteen Is Viewed 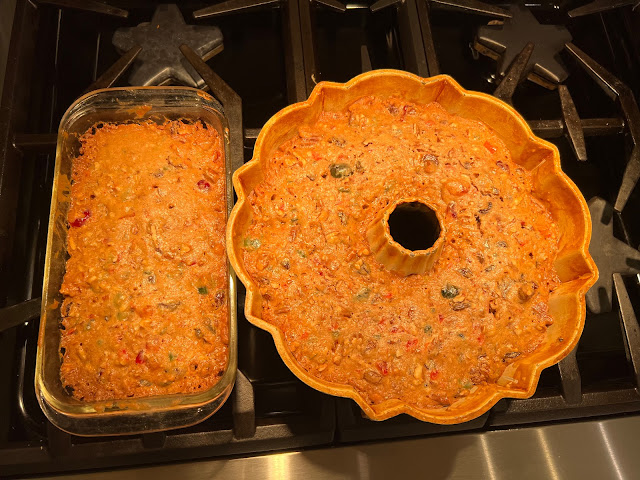 I was going to go to town today to meet Jessie and possibly Lily for lunch. In fact, we were texting and planning and doing all that stuff (where do you want to eat?) when all of a sudden the wind picked up and the leaves started fluttering and the limbs began to tremble and dance and I realized that perhaps that tornado warning we'd gotten wasn't kidding. Then I heard a transformer pop and the power went out but no worries here because of our amazing, wonderful, terrific, miraculous generator which powers the whole house from internet to lights to refrigerator to...everything. It cranked up and life as we know it continued on with barely a hitch.
But lunch plans got canceled because I wasn't too excited about driving to town in such conditions and so I decided to go ahead and make the fruitcakes.
And so I did.
I always forget how much batter that recipe makes, especially if you do like I did and one-and-a-half it. Does that make sense? I knew I didn't want to double it but I had too much fruit for just one batch so I one-and-a-halved it.
And in the process I got every bowl in the house dirty and am on the second run of the dishwasher. I should have just washed all those bowls by hand but by golly, I waited so many years in this house to get a dishwasher and didn't complain but once I got it, I intended to use it and so I have. And I do not feel guilty. I remember once someone I knew posted on FB about how washing dishes by hand was meditative and good for our souls and I commented that actually, meditating by actual meditation was better for my soul (not that I meditate) and if I used the dishwasher I would have the time to do that.
Moot point, sure, but you know what I mean.
Now weeding is meditative to me and I love doing that but washing dishes is something that I've done enough of in my life, thank you very much, and I am still thrilled, years later, to have a dishwasher. And no, it is not just as much work to rinse off the dishes and put them in the machine. By a long shot.

We never really did get strong winds or terrible rain but it's drizzled all day and so I stayed inside and did inside things like make those fruit cakes and bake them and now they are wrapped in a little bit of cheesecloth with a little bit of rum and then in aluminum foil, tight and cozy to wait until Christmas or whenever the hell we want to eat them.

While I chopped and mixed and baked and did some laundry I've been listening to an audio book. "The Love of My Life" by Rosie Walsh. Great narrators. And the book is not bad. It's a bit of a thriller, I guess. I can never figure out how these things are going to end. I hear people say that they know by the third page or a who-done-it who the murderer is and I feel ashamed because sometimes I haven't figured it out entirely even after I've finished the book. Which reminds me of a silly, silly play I was in once. We'd been rehearsing for at least a week before the person playing the murderer said, "Oh my god! I'm the killer!" We all laughed. It was a pretty horrible play but we had such fun with it and by the last night, we'd pretty much rewritten the whole thing which improved it tremendously and of course it didn't matter who had done it at all.

I also sat on the couch and did some stitching on the Maggie letters and watched part of an interview that Howard Stern did with Bruce Springsteen. It's on HBO Max. In the manner of Bruce's performances, this interview goes on for days. It appears that Stern has become a legit interviewer these days, shedding (for the most part and certainly in this case) his shock-jock schtick. Bruce Springsteen is such a conundrum to me. I have loved him and his music since around 1978 when my first husband and I went to see him in Jacksonville. He was so young then, still the skinny kid from New Jersey who leapt onto speakers and also into the crowd which carried him overhead like a beloved holy icon around the audience. He wore a Fruit of the Loom T-shirt and a pair of Levi's and it was indeed a religious experience. I saw him again in 1984, I think, when he was doing the Born In The USA tour and I am not making this up- a friend of mine claimed that his music cured her uterine fibroids.
And I sort of believed her.
I'm not sure that anyone on this planet gives more of themselves in a concert than Bruce Springsteen does.
When his autobiography came out in 2016 I read it avidly but came away from it sad. He has struggled so much in his life with depression and anxiety. He's had a lot of therapy and at least has a far deeper understanding of why he is the way he is but I got the feeling that despite the joy that he gets from being onstage and from his wife and his children, he will never be a truly happy person.
The Stern interview is a good one and Bruce does some playing and singing in it. They discuss fathers and love and therapy and work.
I think the thing that makes me the saddest about Bruce Springsteen is that despite the absolute joy and exaltation that he fills his audiences with, I don't know that he experiences those things personally except when he is onstage. Which is probably why he does such long, long concerts.

My main take-away from this interview so far is that religion and fathers can fuck you up. Springsteen said a very interesting thing that I think has a lot of validity which is that every artist he knows (and I am sure he's only speaking of the male ones here) had a mother who thought he was the second coming of Jesus and a father who thought he was a piece of shit.
Interesting theory.

Mr. Moon has gone to a basketball game with Tom and it's quiet here. I can still hear the rain dripping. The power came back on many hours ago so the generator is silent, waiting patiently for when it is needed again.
Tomorrow is my day to go pick up Levon and August from school and tend to them while their mama and daddy are working. I can't wait to see what they think of "The Managing Hen" book. I love to hear children's opinions about things. They are often far more interesting and complex than we would give a child credit for.

Supposed to get chilly here tonight. Everyone stay warm.