Day One Of Solitude This Time Around 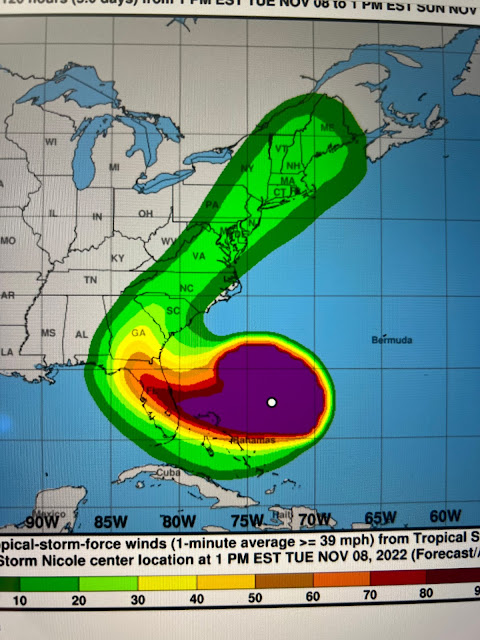 Is it just me or is that a rather lewd picture? Lewd or not, that's the latest from the National Hurricane Center. My adored meteorologist, Rob Nucatola, hasn't reported in this afternoon except to do a short video on what the "cone" means in all of these predictive graphs. What it means is, is that anything in the cone and oh yeah, outside it but nearby can be the actual path of the storm and where it could cause the most damage.

I'm not worried for us here. I am somewhat concerned about the Weatherfords. Vergil rented a car to drive down to Orlando today and Jessie's plan was to head down tomorrow with the boys to join him after Levon and August get out of school. I don't think she's made a decision yet about whether or not to go. This is a huge big deal for those little guys. A trip to Legoland is about as good as it gets for kids who play with Legos all the time, who read the books (yes, there are Lego books and they are terrible), and who have a play room basically filled with the little plastic blocks and all of the accouterment. Plus- going off with Mama and Daddy to stay in hotels! The glory! The joy! The TV right there in front of the bed! They would first stay with Vergil in his fancy Orlando hotel and then the hotel at Legoland and I just googled that place and it's...well...my personal nightmare but if I were August or Levon, I would probably rather go there than heaven where they probably do not even have a water park or a Ninjago World.

So that's all up in the air.

Speaking of being up in the air, Mr. Moon got up at four this morning and gave me the sweetest hug good-bye and headed off on his journey. He had packed the car last night and was ready to go. He drove to the Weatherford's and St. Vergil gave him a ride to the airport. I woke up hours later to a love note and a hot pot of coffee. He called me when he was in Seattle and he should be in Canada soon. He said that all was well.

My hip that I got worked on yesterday has been sore as hell which is to be expected and I decided that I should take a walk. All weekend, Vicky and Mary kept saying, "Motion is Lotion!" when anyone would complain (even them) about joint and muscle pain. Mary has been a fanatical work-out person, biker, runner, you name it, forever. She TEACHES Boot Camp, y'all. And Vicky is obviously in excellent condition, goes to the gym, bikes and is an NP in an office where she spends her days diagnosing and treating different sorts of pain issues, I do believe. She sure knows a lot about the subject, I'll tell you that. So I trust them on the "motion is lotion" thing although it seems to me that the more I exercise the more I hurt and I brought this up with Vicky and she agreed that yes, this can be the truth BUT, ya gotta keep doing it anyway because if you don't, I guess you'll lock up and die or something BUT as I told her, it is not very motivating when it comes to exercise.
So all of this is to say that on top of knowing that I needed to move, I had the "motion is lotion" thing in my head so I took off down the road. The Lloyd Woman's Club, which is on my route and which is a voting place, had cars parked all in the yard and across the street too. I did not know whether to be cheered or discouraged. But I suppose that overall, the very fact that people are voting is good.
I just hope (oh please god, oh please god) they aren't voting for the Trump minions.

It has been a beautiful day here, a tiny bit cooler and less humid. Glen said that we got a pretty good rain while I was gone but everything is still so shriveled and crunchy. 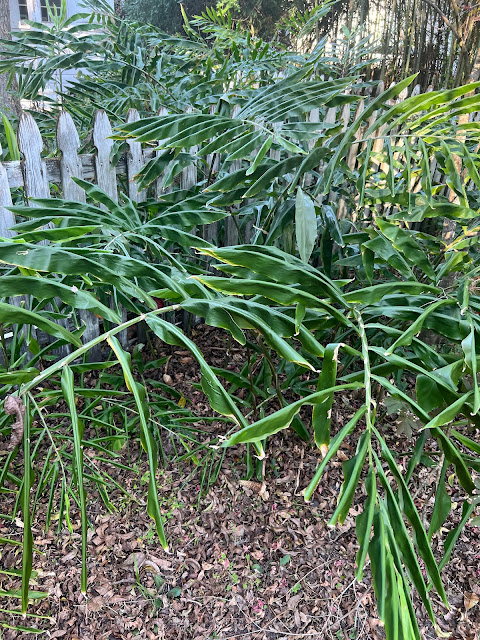 This is what the pinecone lilies look like now. Instead of having lush frond-like leaves, they are pulled in on themselves in order to conserve whatever moisture they have in them, I suppose.
My bananas are getting ready to cut. 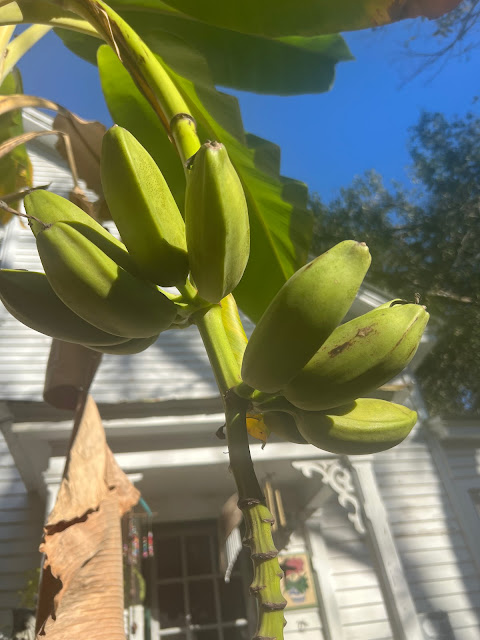 They are few in number but somehow they appear to be fatter than any I've seen grow on those plants. And yes, I have now cleaned my lens.
I've not done a lot today. A few crosswords, some putting together of another potholder while I watched the last episode and a half of "Mormon No More" on Hulu. I cried my eyes out at the ending.
Yes. I am still obsessed with Mormons.
No, I still have no idea why. This series though, is about two women who were good Mormon girls, good Mormon wives, who met and fell in love with each other. Pretty emotional stuff.

I picked some greens to actually cook. Mustards, turnips, collards, kale. I will stir fry them as they are so very young and tender. 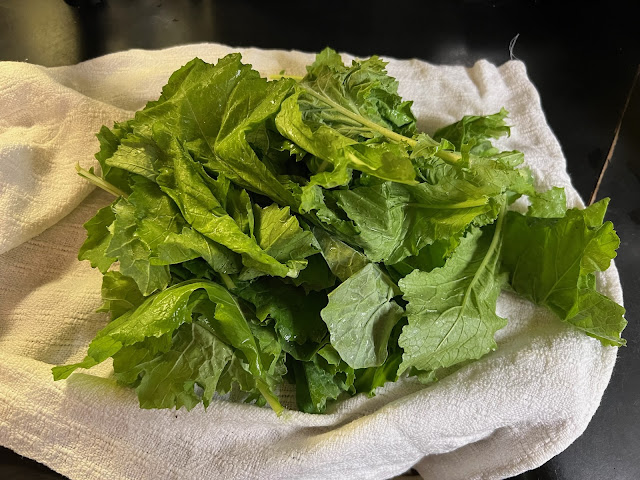 I took a walk around the yard this afternoon. Here's one of our oak trees. 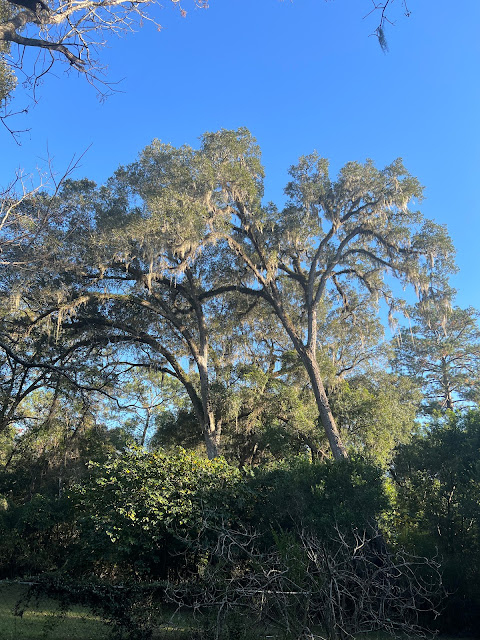 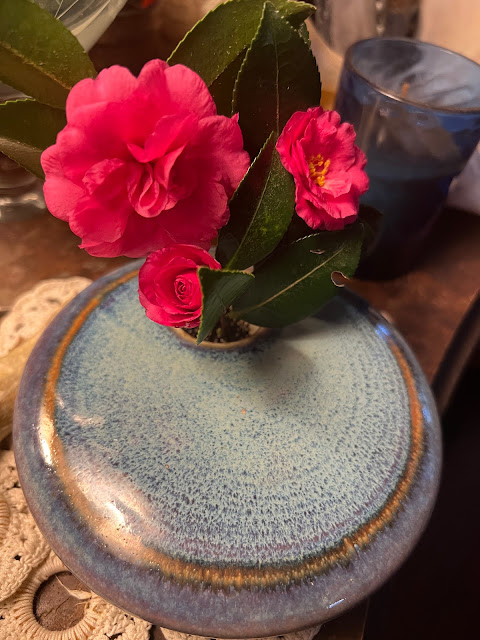 I do so love that vase.
One more. 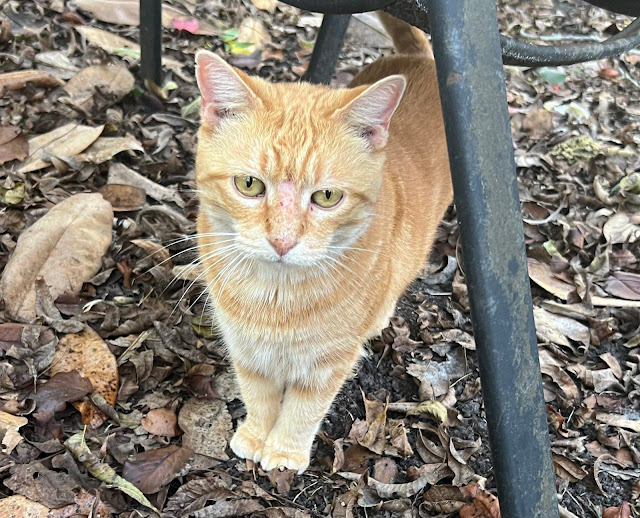 The cat who could not care less about me and yet, at the same time, has a deep need to follow me around as I move about the yard and house.
Not all of our familiars are affectionate and that is okay.
Also, I sat down at the piano and as expected, I am a bumbling, stumbling fool and despite that, I loved it so much.
Love...Ms. Moon
P.S. Mr. Moon just texted me that he has arrived in Edmonton and the temperature there is 7 degrees Fahrenheit.
Holy fuck.
Posted by Ms. Moon at 7:10 PM