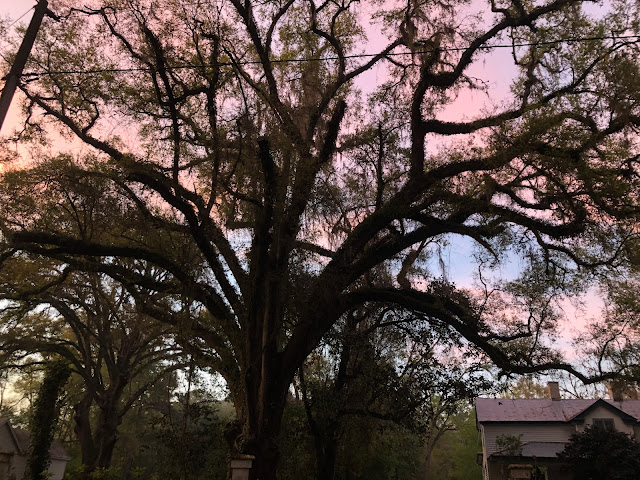 The sky was so amazing last night when I went to close the hen house that I had to take pictures. Can you believe that tree? It's in the yard of our across-the-street neighbors. That's part of their house there in that shot. Even if I live another thirty years (I doubt it) in this house, I'll never, ever grow blasé about these live oak trees. In my eyes and heart, they are sentient beings, as are the giant magnolia grandifloras. They are all magnificent.
Here's what my house looked like with my back to that pink-streaked sky. 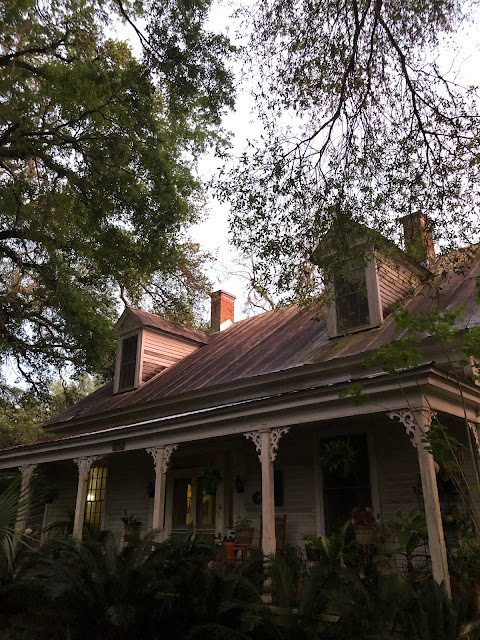 There was almost a tinge of green in the sky after our day of rain and gray clouds. It's a sky tint that I associate with hurricanes, mostly, but it can come with any storm and we had a few this past week with wind, lightening, thunder, and rain.
When I reversed my actions this morning and went to let the chickens out, I was greeted with an entirely different world. One in which the blue of the sky was like indigo. 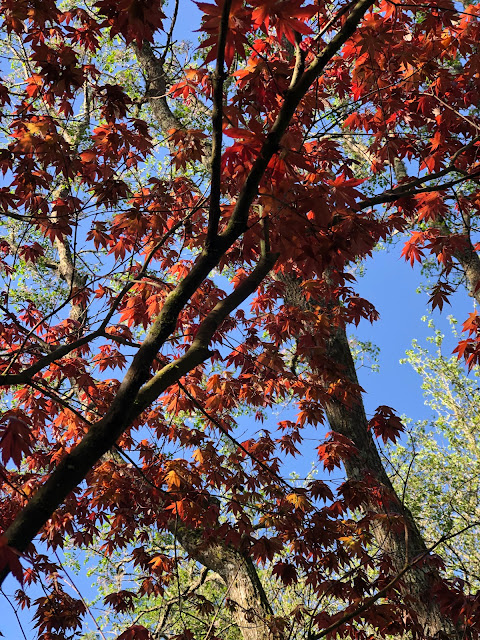 Everything was washed clean and new and almost quivered with vibrant life. 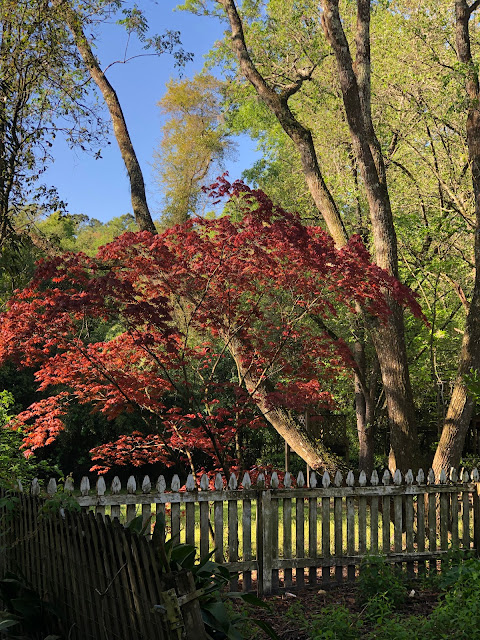 I did a walk-around the house and discovered that the bamboo, which I have largely ignored for possibly three days, maybe only two, was not just quivering with life but was thrusting itself up towards the sky as quickly as possible. 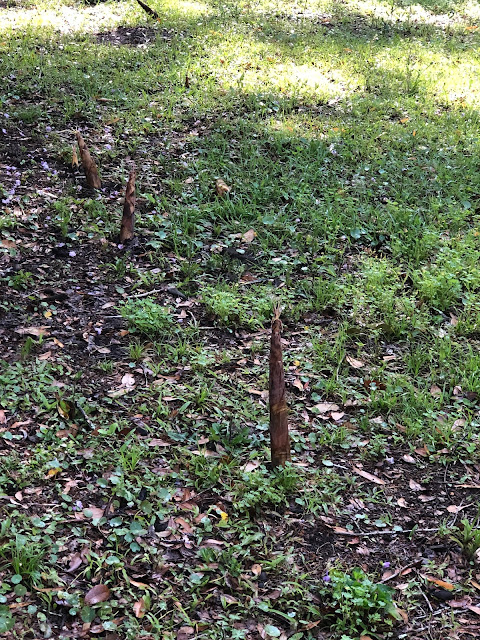 Can you see those robust sprouts? Bamboo is a sly plant. You can think you've kicked every dang one of them coming up where you don't want it to grow and the next day, you'll realize that you obviously missed one which is now three feet tall and as big around at the base as Levon's thigh.
It is a constant battle.
Speaking of Levon, Jessie brought the boys over for a little visit this afternoon. Jessie and Levon helped me pick up fallen branches and limbs and put them in the garden cart which I hauled over to the fire pile. It was a pretty good load and we didn't spend twenty minutes on it. August was too involved in setting up the Parcheesi board to join us. And no, we did not play Parcheesi. I set out leftovers and made a peanut butter and honey and raisin sandwich for Levon who loves that more than anything, and lunch was taken on the back porch. 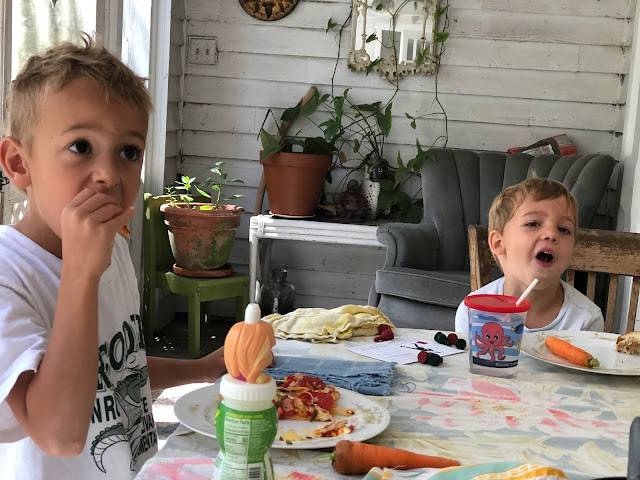 They didn't stay long because they're all a little sick (yes, again) and Levon needed a nap. Before they left though, Jessie let them watch one episode of The Flintstones with me. I'd been wishing I could introduce that show to my grandchildren as I have fond memories of watching it with my grandfather who, although he rarely laughed out loud, would laugh with great gusto at the antics of those stone-aged Honeymooners, which as Hank pointed out recently, is exactly what the show is based on. It runs on HBO Max and so we gave it a shot and I was rather dismayed to realize how violent it was. Okay, it was cartoon violence and Fred did not threaten to send Wilma to the moon, but still...
I had forgotten that aspect of it and honestly, all of the cartoons we watched when I was a kid were violent. If Wile E. Coyote wasn't trying to drop an anvil on the roadrunner's head, Tom was trying to catch, slaughter and eat Jerry.
You know what though?
I still laughed at some of it. And so did August. Who among us does not remember the sound of Fred as he twinkle-toed down the bowling alley?
Who doesn't laugh when the paper boy throws Fred the newspaper and he falls over backwards when he catches it because of course the newspaper is made of stone?
Or, well, maybe it's just me.
I tried to be slightly productive after Jessie left for home. I cleaned out the hen house and did some weeding in the garden where we want to plant the rattlesnake beans. I was delighted to see how many worms I uncovered in my efforts! I covered each one back up again and mumbled a silent apology. Some of them were so big I almost expected them to hiss and slither instead of wriggling about.
Perhaps I am being nostalgic today but for our supper I am going to make that old school cafeteria favorite- sloppy joes! The recipe comes from the New York Times so it's legit and bona fide. And I'm making it with venison so I can skip the part where you're supposed to drain the ground beef after you cook it. Venison has so little fat in it that you just about have to add some when you're making something with it. So that may be fun.
And Mr. Moon should be home for supper although he may not want to eat much. He sent pictures of some amazing-looking meals that he and Vergil ate in NOLA. I mean- you HAVE to eat amazing food when you're in New Orleans! Am I right? You bet your ass I am.
I think the guys had a very good time, even though Duke lost last night. I'm sure they'll be glad to get off the road though. That was a lot of driving for two days.
Here's a blurry picture of the small panther who walks through my backyard every day. 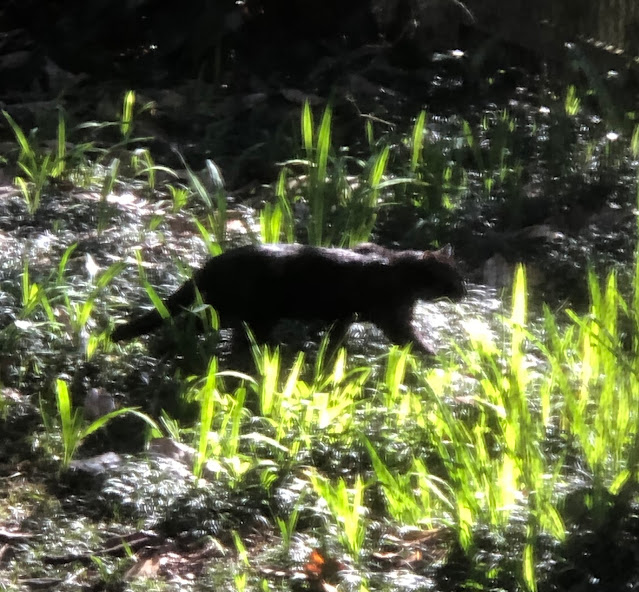 It's like a scheduled event. Maurice and Jack forget their animosity towards each other for a few moments and lie in wait a few feet apart, looking out of the bottom of the screen on the back porch, both at high alert in case the stranger decides to come in the cat door. We haven't seen Biscuit Head in a few days but I did hear a cat fight a few hours ago and I did not recognize one of the voices. Mr. Moon got trail-cam proof of who's been pissing on the bathroom rug and in this case, it was our own cats, their eyes glowing in the dark images, carefully arranging themselves (separately, of course!) on the rug and then carefully trying to fold it up when they had finished their toilette. We're just keeping that bathroom door shut for now and I've quit putting a rug in front of the kitchen sink because they've been peeing there too.
Cats.
Tomorrow I'm going to go get my crown-work started. Am I anxious?
Do you even know me?
Yeah. You do.
I shall survive.
Love...Ms. Moon
Posted by Ms. Moon at 6:28 PM