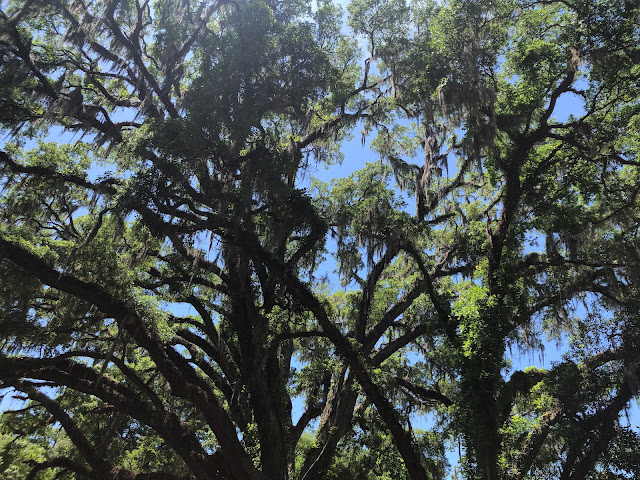 This is part of the crown of the incredibly majestic oak that lives next door to me. The one I referred to when I told my new neighbor that he had not bought a house, he had bought a tree.
Of course, one cannot really own a tree. At least, not in my opinion. At least not a tree like that which is hundreds of years old and which is so obviously a sentient being of its own. Not only that, but there is an entire ecosystem within its branches. I can't imagine the number of birds and squirrels and insects and plant species and fungi that have made and do make their homes in it.

That was the only picture I took on my walk today which was truly a pretty fine one- four miles today! Admittedly, I did not walk very fast and I also stopped a few times to chat to people. When I walk, my aim is to walk steadily and not mosey, but when people want to say hey, I'm up for that. The first person I talked to was a neighbor whom I really like but probably only talk to maybe once a year. I think she's about as socially anxious as I am but I think she's a fascinating woman and whenever we meet, I thoroughly enjoy it and feel right at home with her. She was out clearing brush with a very handsome and sturdy looking swing-type tool. I was impressed. Of course we discussed the FDG and she is no more happy about it than I am.
After I talked to her, I walked on down past the site again and the water is still there and my neighbor had suggested that perhaps they were going to put a retaining pond in and I think she may be right. They are certainly man-handling that property, shoving dirt this way and that. It has been cleared of every stick and stem and it looks to me like they've trucked in some red dirt to build up the lot.
Y'all- I am losing any hope whatsoever that this project can be stopped.
Another person that I paused to talk to was a man in a car right by the light at the intersection by my house. He wanted to know about a car that Mr. Moon has had in the yard forever. I had just told my husband yesterday that he needs to get that thing hauled away. He bought it from a friend, sort of as a favor, and he's done nothing to try and sell it, probably because it's not worth selling. So there it sits right next to the bamboo jungle down by the old barn. I told the man who was asking about it that it wasn't running and it wasn't worth trying to get running. Of course I really don't know a damn thing about it but that's my opinion. He told me that he always noticed a lot of cars and trucks in our yard and I allowed as how yes, that was true, and told him that my husband used to sell cars and although he still has a dealer's license, he's pretty much retired but he still has lots of project cars.
This is absolutely true.
Lots of project cars.
The man ended up asking me if I was all right and I am sure that I looked like I'd been walking through the desert for forty days and forty nights. I wiped my brow, said I was fine, and that I was almost home.
And then I saw my new neighbor in his yard and stopped to talk with him for a moment. He's just had two nice sheds put on his property, one, as he said, a She-Shed for his wife. He has a lot of tattoos.

And then I came home and haven't done much of anything else all day long. My husband, the car guy, put on his plumbing hat today and replaced the toilet in the kitchen bathroom. For whatever reason, it always seems like a sort of crazy, bizarre magic that a regular person can go to a store, buy a toilet, bring it home, take an old one out, and install a new one.
And yet- it can be done!
And it was done today at my house.
Mr. Moon is quite handy, I must say.

Darla and Violet are still sitting on their nests. I have Darla's Estimated Date of Non Confinement as next Monday on my calendar, and Violet's as a week later. We shall see how close I get on those predictions, if indeed either one of them actually hatches out any bebes.

The zipper peas I planted last week are popping up. I was a bit worried about their viability in that the seeds were a year old but they all seem to have germinated. I am picking peas every morning and am hoarding them like a woman hoards memories of long-ago kisses in the dark, waiting until I have a good amount to shuck. We had thought we were planting the types of peas that have delicious, sweet pods but these peas have stringy, fibrous pods so I'm picking the fat ones to shell. 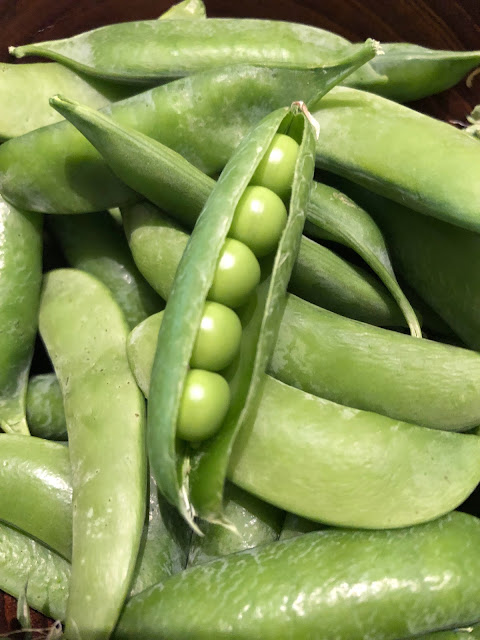 Oh gosh. How pretty are those? I am hoping with all my heart that I'll be able to find a few baby potatoes in the garden to go with them in a light cream sauce. Mr. Moon does not like green peas so I will be able to eat all of them myself. I think he will probably gladly eat some raw in salads though, should I deign to share any.
We should be eating tomatoes soon. 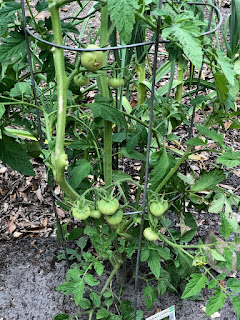 This is a hybrid called Cherokee Carbon and it certainly looks prolific.
And so it goes and here we are and it ain't too bad.
Love...Ms. Moon
Posted by Ms. Moon at 6:31 PM