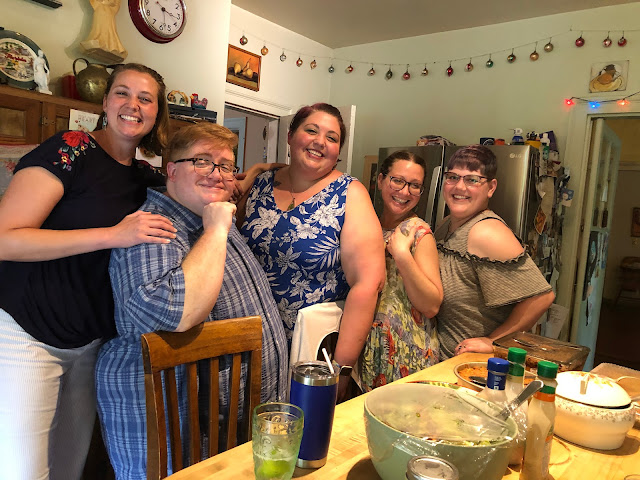 It was actually a very nice, very sweet Easter meal and I got everything served except the pickled peaches which I forgot which really sucks because they are delicious and I'd taken a jar out of the pantry ahead of time and put it in the refrigerator so that they would be nice and cold but...oh well.

At about 10:45 this morning I decided that biscuits would not be enough bread matter and so I made up a loaf of challah which always rises so beautifully and I forgot to take a picture of it which is sad because it was beautiful. I did get a picture of the biscuits. 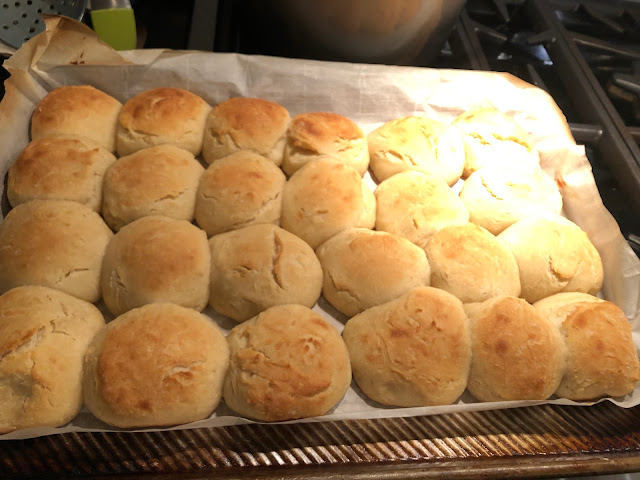 They were so good and honestly, making up the dough and refrigerating it a few days ahead of baking only makes them better. Because they have yeast and self-rising flour and baking soda AND buttermilk, the lusciousness factor only increases with age.
Jessie and Vergil got back from Apalachicola and so did Mr. Moon and his sister, Brenda. In fact, they got here before anyone else showed up. But then the others started to trickle in with casseroles and cakes and salad. And once again, although I had done everything I could before it all started, from making the tea to cutting up lemons and limes to  whipping the cream to rolling out and cutting the biscuits, I was still absolutely ridiculously tizzied by the time it was all happening. But of course, it all got done, the ham was quite fine, the casseroles were terrific, the greens were fit to eat, the tables were set up outside with not a hint of rain and everyone seemed quite happy.
Well, except maybe August but honestly, he was too. 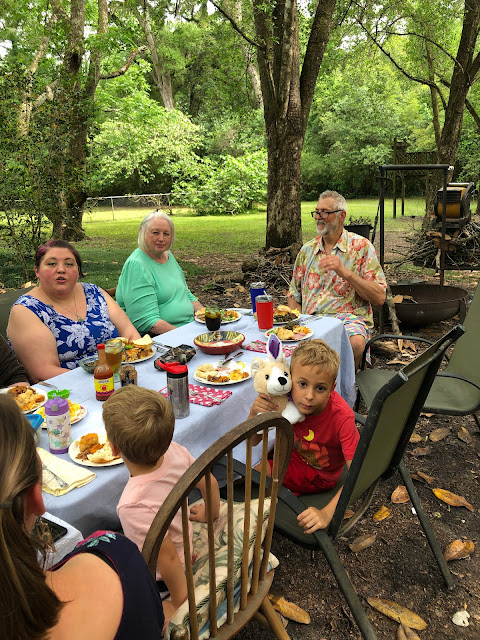 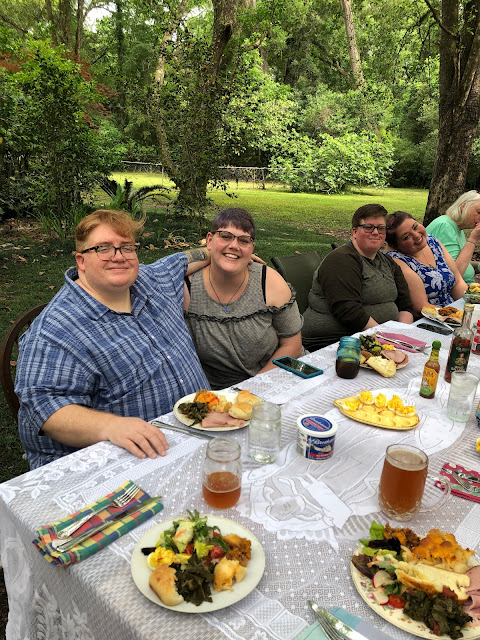 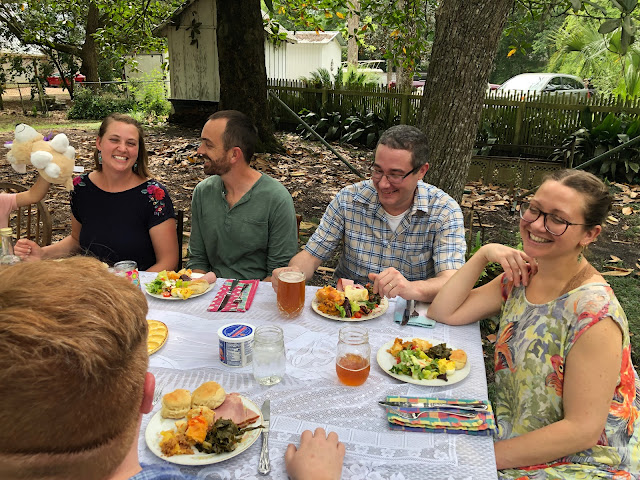 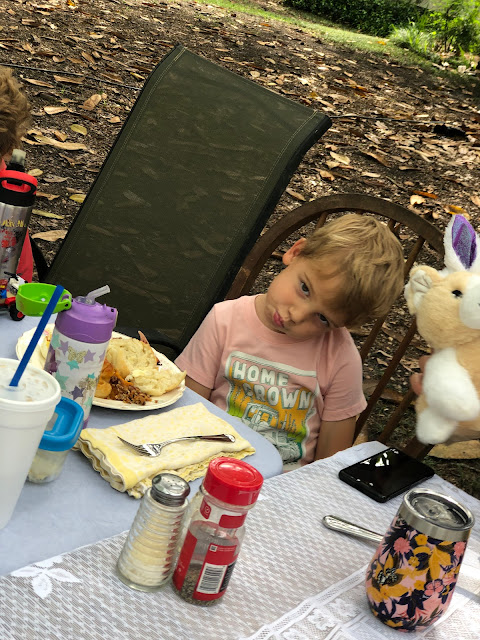 Levon is trying to look sad but not really succeeding. We missed our Hartmann kids so much. It really did not feel complete without them but I'm sure they had a great time with their dad and other grandma and they did all have an egg hunt together this morning.
Here's a picture I love that Lily sent of Owen and Levon. 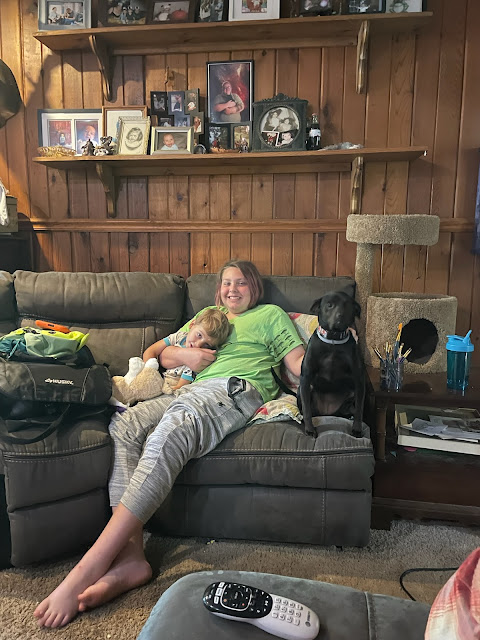 And Pepper. Lily said they had a great time and I'm sure they did. August and Levon themselves told me they did. Those boys are going to sleep like little bricks tonight after the weekend they've had.
I will too. Last night, in fact, it poured rain and even though I slept with an open window right beside my head, I had no idea it had rained at all until I saw this morning that the ground was wet, the leaves were dripping and there was about six inches of water in the garden cart.
When the last hugs were given this evening, it was threatening rain and in the last hour we've gotten another nice little shower. The kitchen is all in order, all of the tables and chairs have been put back in their places, everyone took home leftovers, and I have plenty myself.
It is so quiet here now where two hours ago it was loud and crazy chaos. I was sad to kiss my husband goodbye but I know that he is so happy to have this week with his sister. I may drive down to see them or I may just spend the week by myself, reveling in the peace.
It's so funny how I still want to put these get-togethers on, even though they take some planning and work. I guess I want to prove that I am still the matriarch, to show that I can still do this, and to use this house and yard in the way I envisioned when we bought it, as a place where loved ones can come and spread out if they want  and be together if they want. A place that has no doubt graciously opened itself up to so many gatherings. The older I get, the more I appreciate that. And let's face it- I want to be the grandmother whose biscuits her fifty-year old grandchildren remember, saying, "Oh man. You should have tasted my Mer's biscuits. They were the best. Her Easter dinners were crazy good!"
It's still raining a little. Thunder is rumbling from the south. I better go see if the chickens are ready for me to shut them in for the night. I haven't even checked for eggs today. Ironic, it being Easter and all. But that's okay.

I had a dream the other night that perhaps should have been a nightmare but instead, was somehow wonderful. There was a world-wide pandemic (no, not that pandemic) which was absolutely going to kill every human on earth. It was caused by Del Monte canned stewed tomatoes. At least, that's how it had originated. I give myself extra points for that dream detail.
And knowing that we were all about to die, our family all got together and we had cocktails so fancy that they looked as if Dr. Seuss had designed them with feathers and beads and jewels and we all just loved on each other so much and told each other all the secrets we'd never told before and we laughed and hugged and waited for the inevitable end. It was the sweetest, funniest dream. But in a way, isn't that reality? We humans all will die one day, hopefully not for a long time but in the meantime, isn't it best that we do love on each other, laugh together, perhaps share cocktails, fancy or not, and share what is in our hearts knowing that we will be loved no matter what our secrets are?
Today was a little bit like that. I am so grateful for this family, a family that even when I dream of the end of the world as we know it, would bring me joy just in our being together.
This morning I watched this video and the song ran in my brain all day but not in an annoying way. In a soothing, slow-dance sort of way. I've posted another video with the same song before but I'll give you this one now if you want it. Or if you need it. And if you neither want nor need it, that's absolutely fine.
My cup of tea does not have to be yours.
Oh, the frogs are singing their own love songs and the rain is pouring down!
What a beautiful Easter.
Love...Ms. Moon
Posted by Ms. Moon at 8:01 PM