When I got up this morning I was fairly certain that I was coming down with what Jessie and the boys have. So I did what any caring person would do which was to call and reschedule my dental work.

Really though, I did. If this is something (and I do think it is) there's no need for me to give it to my dentist. And in talking to Jessie just now, it would appear that this is not just another light cold-type thing. She's at Patient's First right now because she's been feeling so bad today, feverish and miserable. Levon's got it bad too.
So damn.
Not only are her kids back at school now (although not today and probably not tomorrow, either), she's working at the hospital again and as we all know, there's no better place to pick up a virus than a hospital although she is working on the Mother/Baby unit which should be a less-germy place to work. I swear, it's like all of the other viruses have been biding their time and girding their loins while Covid kept us all isolated and masked and now they're desperate for humans to infiltrate and make ill.

But I haven't felt that bad. I had a most beautiful surprise when I went down to the post office and retrieved a package. Linda Sue, from Lady Margaret's Curlers  sent me another one of her magical boxes and this one was filled with doll clothes! All of Maggie's wardrobe wishes have been fulfilled with this box. 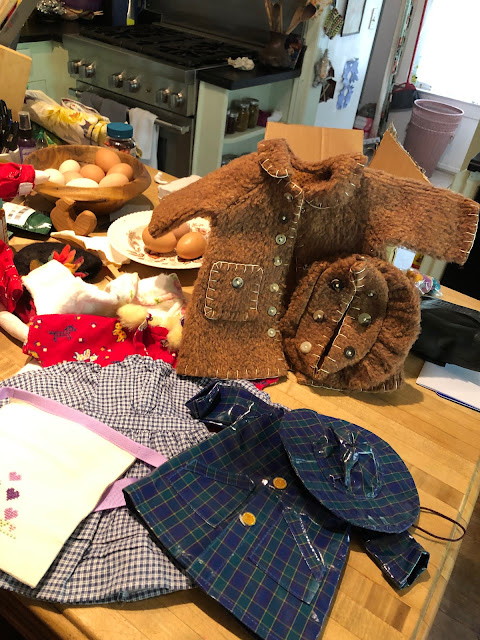 Dresses and a bathrobe and a jacket and hat and even rain gear and an apron. Look how happy Dolly is in her new red dress. 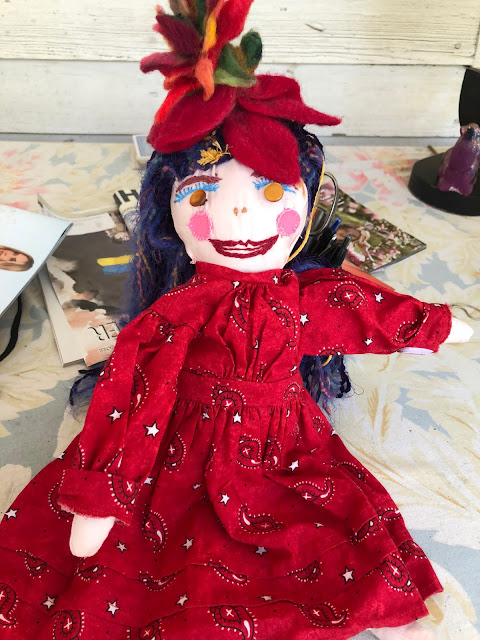 I think that her smile got a little bit wider when I put it on her.
I am so overwhelmed with the sweetness. Linda Sue even sent some darling felted flowers that I can either sew into the doll's hair or sew onto a headband that I make for her, thus fulfilling another of Maggie's requests that she have flowers in her hair.
Linda Sue has some sort of special power that allows her to send things that absolutely make me happy. I have treasures that she's sent all over this house and I think of her and her generosity and her artistic abilities so many times a day.
The blog world blows me away. I have made friends via this virtual communication pathway that I consider as close to me or closer than many actual acquaintances.
It's all a sort of miracle to me. If I were woo-woo (which I am not), I would say that some sort of magic was involved in us all finding each other and even as I deny that possibility, I admit that it is indeed a type of magic. Modem magic, internet magic, word magic, word-of-mouth magic...
Perhaps not a supernatural power but a power, nonetheless. 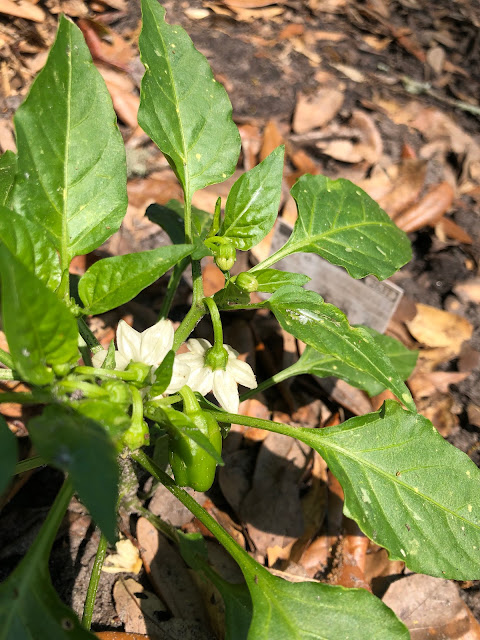 I did a little work in the garden this afternoon. I finished weeding where the beans will go and pulled the spinach which is spent, after I denuded it of all the leaves that were worth eating. I did that for a few collards, too, to make more space. We'll be eating those collards tonight as well as some of last year's field peas. And that is an entirely different sort of practical, pragmatic magic. That tiny pepper in the picture above is one growing on a plant that I bought in a nursery and that Mr. Moon planted. The pepper seeds I planted are indeed growing and I will be happy to see them get into the ground too.
I just heard from Jessie. She has tested negative for flu, covid, and strep. The NP told her that a Flu B is going around and it may be that.
Flu B?
She was prescribed Tamiflu.
And so it goes.
Black cat is making his daily crossing of the yard. Maurice is quivering in alertness. Last night, Mr. Moon brought this home from August who had given it to him when he dropped off Vergil. 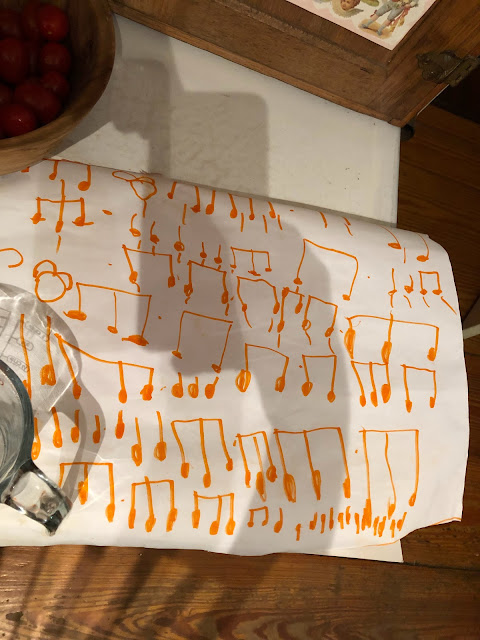 Really?
Jessie said that August had been writing notes on paper and asked Vergil if he had any music written down and Vergil gave him a jazz harmonica book to look at and then the boy spent a long time copying notes.
I have to say that in all of my years of child-rearing and child-tending I have never seen a six-year old want to write down musical notes.
I sort of want to get that framed.
The things that go on in children's heads is one of the biggest and most delightful of mysteries to me. I am constantly amazed.
Love...Ms. Moon