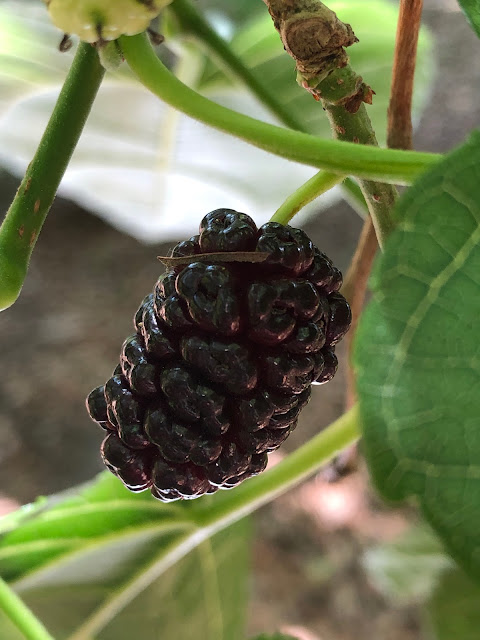 It has been as fine and sweet a day as that mulberry- the first to ripen- and which I ate. I am sure that we have had other springs that were as lovely and as temperate as this one has been but I can't remember when. And yes, we have had storms but I consider them to be magnificent additions to perfection.

The mulberry tree doesn't look as full of fruit as it has in past years. I have no idea why. Perhaps they, like many fruit trees, have very productive years and years that are leaner. I just looked this up. It is called "biennial bearing." So perhaps we won't get enough to make jam or pies this year but enough for the children to snack on.
It will be as it will be.

We've had a chicken casualty. She is not dead but she is definitely wounded. See the two black and white hens in the header picture? Those are my barred rocks. Alice and Annie and I have no idea which is which. They are curious chickens, and bold. I admire them and they have the nicest little song they sing as they go about their days. Last night when Glen put the hens to bed he came in and told me that one of them was on the ground, in the corner of the hen house and asked if I'd come out to look at her with him. I did and she was fine enough to peck my hand and draw blood but chickens do not nest on the ground for no reason. Was she brooding too? It didn't appear so. She wasn't flat on the hay the way a broody hen is and she didn't have the erect and thrumming feathers of a mama-to-be either. We didn't pick her up to examine her, just let her be as she obviously did not want to be touched.

But this morning she was still in the same spot. 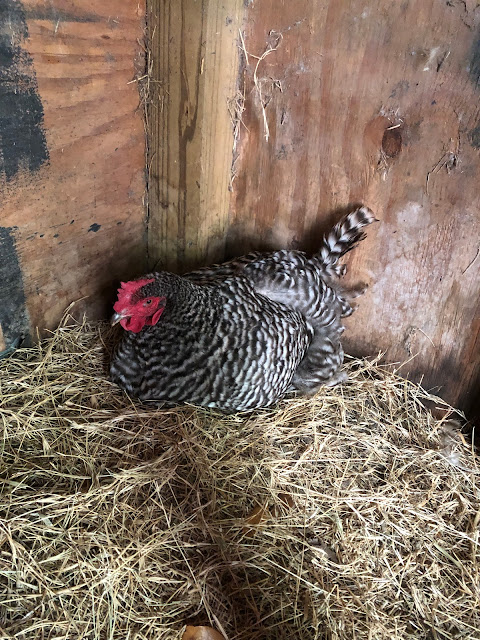 Her wing did not look right and she had a visible plucked spot on her neck under her comb although you can't see it in that picture. This time I went and got Mr. Moon and together we lifted her up and examined her and bless her heart! She is plucked as clean as a Tyson employee could manage on the side of her body under that wing and has a deep wound. Her rear is swollen and a shell-less egg began streaming out of her. Not good. Mr. Moon held her while I came in and mixed up some golden seal and neosporin- my all-purpose, go-to remedy. I smeared it on her wound and put her up on a nest in the hen house. Being on the ground makes a hen dangerously vulnerable. She made her way to Darla, who was on the nest, and tried to lay her egg right next to her. This is what hens do when another hen is broody. They add their eggs to the clutch. Once they are laid, the brooding hen sweeps them under her and she will hatch and raise them as if they were her own eggs. What an efficient system of cooperative child-caring!
A little later I went out and moved my barred rock to another nest and put food and water in there with her. She is there now. I do not know if she will survive or not. But after I found what appear to be thousands of feathers in a swath that goes halfway around the garden, I know she is tenacious and I do not know how she survived whatever so viciously attacked her. 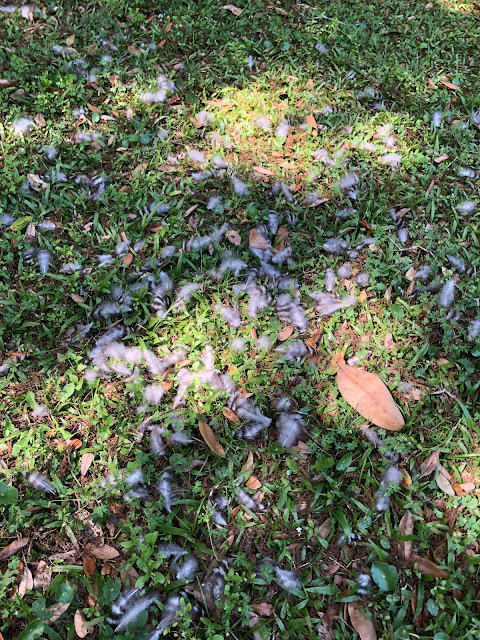 That is just one small spot where there are feathers. I found them when I went out to plant the rattlesnake beans.
What got to her? And another question is- how did we not hear whatever was going on? Chickens are not silent when they are in peril. Mr. Moon and Vergil were nearby in the garage almost all day and we had the doors open for part of the day. I don't think it was a dog that got her. I don't think she would have gotten away if it had been. We've got many, many hawks right now and some of them are big enough to try and snatch a hen. I almost wonder if it was a cat- Biscuit Head, for example, but Mr. Moon says no. I'm not convinced. I am sure it was not this one, though. 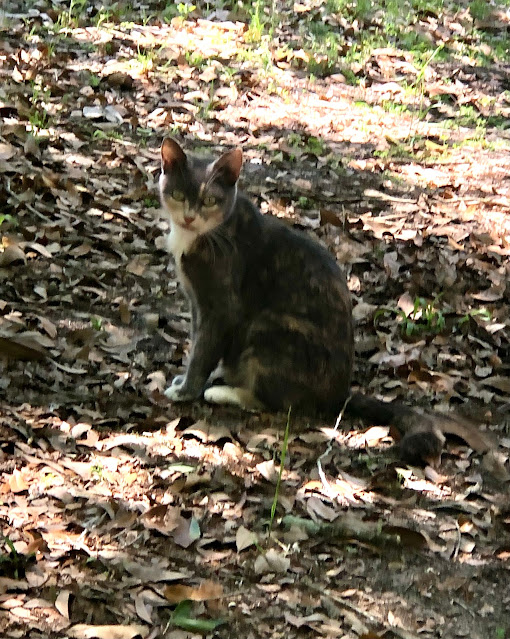 That little one also comes around to visit but I think she may be the pet of the woman across the street. Who knows?
Anyway, I am hoping the best for Miss Annie/Alice. Chickens can be far tougher than we could imagine. And she is absolutely alert. When I went back to move her into her own nest box, I wore gloves and was glad I did. I'm sure she's traumatized.
Meanwhile, my kitchen garden bed roses are going insane. 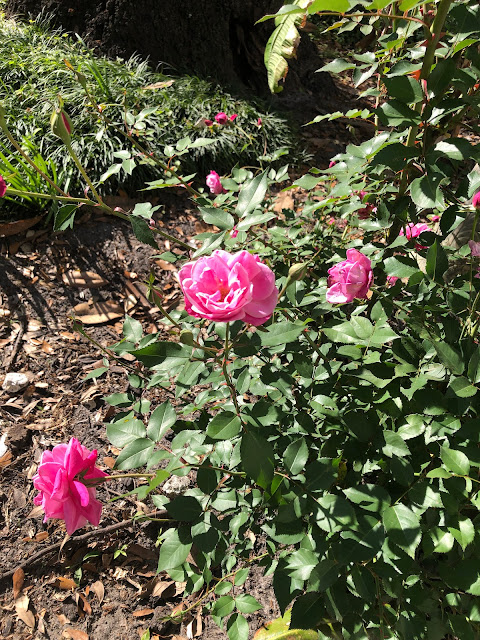 I believe they are thrilled at the amount of sun they're getting since we took out that cherry laurel. I am hoping that the poor little gardenia I planted two years ago which has barely held on to a gasping life will respond too. Also the rosemary's I have planted. The mint I put in last year and which barely survived is growing nicely and most likely, before summer's end I will be cursing myself for planting it.
Live and learn. Supposedly.
Love...Ms. Moon