Measuring Out Life With Coffee Spoons And Suppers On The Table 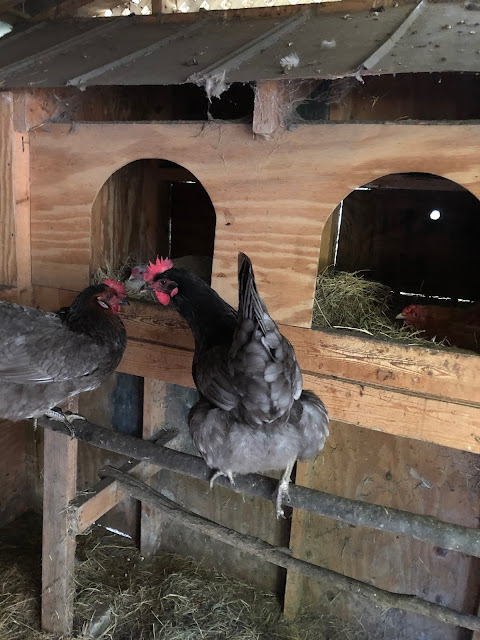 I took this picture this morning when I went out to check for eggs. If you look carefully you can see the story here. There's a hen in both of those nests and the two gray girls are waiting on the roost for the nest they want to become available. Doesn't it look like they're discussing this? They remind me of two ladies in a public restroom waiting in line for a stall to open up.
"Do you mind if I go first? I'm about to die. I just drank a forty-two ounce Big Gulp."
"Oh, sure, honey. I can wait."

And let me remind you that there are FOUR other nesting areas within three feet of them. They want what they want.

I've been feeling treacherously low lately. Nothing specific and I even had to reassure my husband this morning that no, I am not upset with him. "I'm upset with the world," I said. I think all of us are probably completely on edge right now. At least I didn't have horrible dreams last night. The one I remembered this morning when I woke up had a lot of sweetness in it. I was back in my old elementary school where frankly, I experienced a great deal of unhappiness and bullying but that wasn't part of this dream. There was a reunion of my old classmates but the best part was that a woman I knew as Aunt Dot was there although she was combined with my favorite teacher- a sort of dream woman and when I looked into her face and realized who she was I was so very happy and hugged her hard and she hugged me back.
At the time in my life when I was in elementary school, these two women gave me more than they ever knew, I'm sure. If I have any self-confidence at all or know how to show love, it's mostly because of them.

So that was okay but I felt nostalgic when I woke up for Roseland and for people I'll never see again in this lifetime and sadness settled over me. But Jessie and the boys came out to play and that cheered me up considerably. It is so wonderful being able to hug and kiss them again. Jessie had brought their bikes and they helmeted up and we went to the post office. Levon has a little pedal-less bike that used to be August's. I'm not sure what you call it. But he propels it by pushing against the ground and it works spectacularly. I sort of want one. And August, when he got a real bike, hopped on and rode it like (as he says) a pro. But it's true. They're so dang cute. 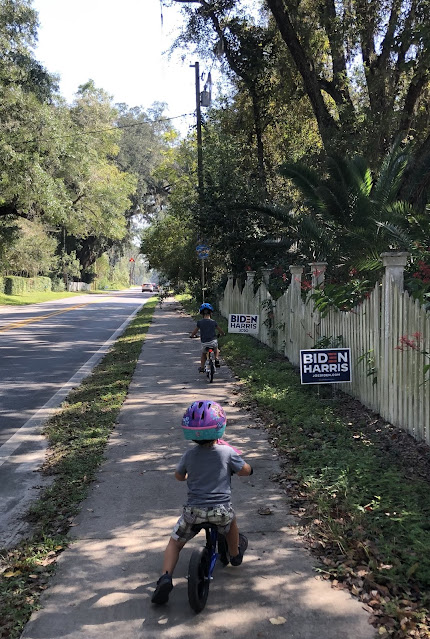 And look- my signs are still up! My firespike continues to bloom like crazy. It's so cheerful.
When we got to the post office, I told the boys I had to take their pictures.
"Why?" asked August. Of course.
"Because that's what I do," I said.
So they let me. 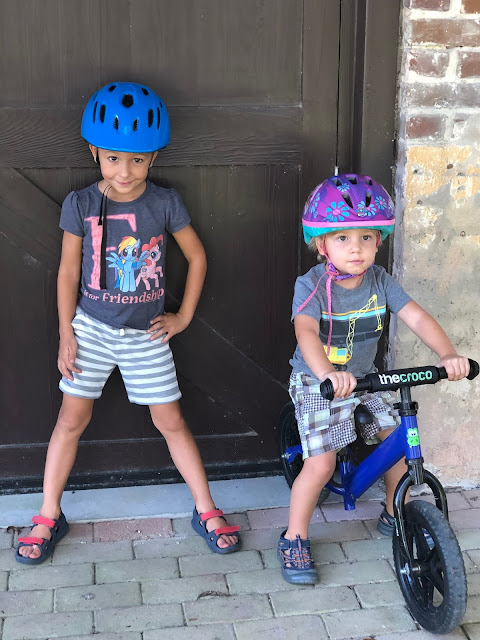 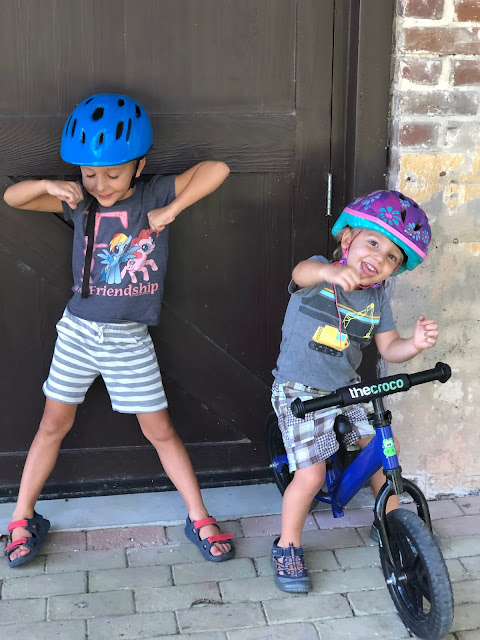 Besides bike-riding, there were also hot-wheels car racing in the hallway, puzzles, sandwiches and books. Both boys sat beside me on the love couch as we read and at one point, Levon even reached over and kissed me. I was thrilled. They do not mind cuddling while we read.
So all of that was good and after they left I cut up the venison roast leftovers and the carrots and potatoes, added green beans and peas and made a gravy with the cooking juices and put all of that in a baking pan and made a pastry to go on the top. I feel like this is a dish that Robin Hood and his Merry Men would recognize. A pie of poached venison and root vegetables, perhaps made by Friar Tuck. Although, to be clear, our venison is not poached from the Sheriff of Nottingham or anyone else for that matter.
I saved the bones and some of the meat to freeze and use for a future soup. Things like this make me feel like the most prudent of housewives.
With the leftover pastry I made a tiny apple and raisin tart that will bake alongside the venison pie. Oh, if I only enjoyed housecleaning one bazillionth as much as I do cooking!
But I do not.
The forecast we had last week for cooler temperatures at the end of this week seems to have changed and it's still going to be up in the eighties every day except for possibly Saturday where the high is supposed to be 78. And no rain in sight. But no matter- I have got to get the rest of the garden in and this is going to require some weeding and mulching. I went out yesterday afternoon to check the coming-up greens and although they look happy and healthy, there are so many tiny weeds coming up alongside of them who also look happy and healthy that I was horrified. Just horrified.
Thank god I like to weed, right? Although this is the most difficult sort of weeding. The kind that almost requires tweezers. Sure, we could hoe them but hoeing, in my experience, basically just rearranges the weeds and causes them to gather more of their powerful life force to re-establish themselves as they send their vital roots back down in the now-loosened soil. And beside the garden work I need to do, there is so much in the yard that needs to be done. The pulling of invasives, pruning, trimming, the picking up and hauling of branches and all of the things I need to trim and pull.
Oh well. What else do I have to do?
Not much and yet, I always seem to be fairly busy and as always during these strange times, the hours and days pass with unprecedented and unexplainable swiftness as if the universe has suddenly taken on different laws of physics and time's meaning is oddly the same and yet not at all.
Enough philosophizing. Time to get the Robin Hood pie into the oven.
Oh, y'all.
Let's hang in.
Love...Ms. Moon
Posted by Ms. Moon at 6:51 PM