And The AC Is Back On

Cozumel survived Delta with some damage but not complete catastrophe. The storm downgraded to a Cat 2, I think before it hit and it did not linger like the horribly destructive Hurricane Wilma did years ago, sitting atop the island for three full days and nights. This storm took out some trees, ripped off a few roofs, and left some areas without power and some streets flooded but overall, people are vastly grateful for what little damage there was. And by the time it was fully light this morning, city workers were already out cleaning up and I'm sure that everyone else was too. 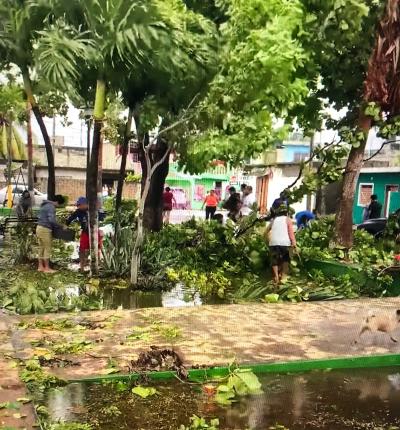 This is a picture I snagged off a video of folks cleaning up a neighborhood park. There was still thunder rumbling. Those people know how to deal with a hurricane and they are not afraid of work.

I was so relieved to see the pictures and videos this morning. The internet can be a beautiful thing.

Our weather here in Lloyd has turned hot and humid again. My walk was miserable and I employed the "the more this sucks, the faster you walk" tactic for getting through it. I rested up for awhile and did things in the house and then went out to plant a little bit. I was so happy to see that the arugula and collards and lettuces that Mr. Moon planted just a few days ago are already coming up.

That's the arugula and the sight of it makes me so happy.
Look how straight his rows are: 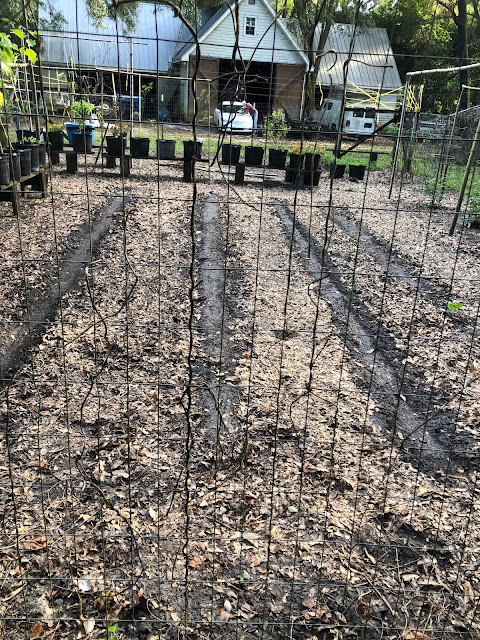 If you look very closely, you can see him back there by the garage where he is detailing a car he bought. He's been working on it ALL DAY LONG. That man. All I did was plant half a row of beets and a row of mustard greens and I was drenched in sweat and had had enough, came in and tended to things in the house. I just can't deal with the heat.
I really don't have much else to say today. I'm going to make us pizza and I need to get busy doing that. It's been a fine day, a regular day, a day I put my head down and did what needed to be done. Let's just say that I did indeed get in my 10,000 steps.
And as usual, I did not die.
Love...Ms. Moon
Posted by Ms. Moon at 6:03 PM