Magnolia June Turns Two And A Monkey Friend Comes Into Being 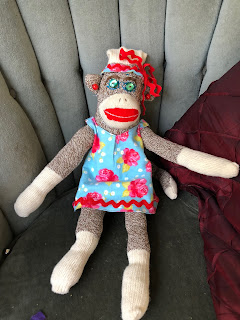 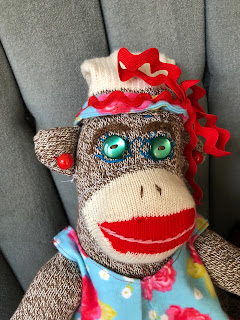 She's a little flirty, don't you think? Those green eyes are mesmerizing.

I got Ms. Monkey done in time for the party and if I'd had more time I would have remade the dress which was really not a great dress and the button hole I made for her tail to stick out of is a bit too high but at least she has a matching headband so she's accessorized and I think Maggie liked her although the very first thing she did was to rip off the headband. Luckily, I made it with elastic so it can come and go as it suits Ms. Mags. 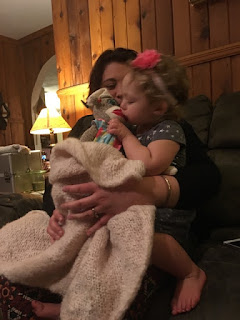 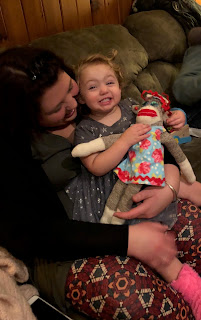 When she was asked what the monkey's name was she said, "Merkis," which may or may not last until tomorrow but it made me happy because...Mer...Kiss.

I will try to start on Gibson's earlier than two days before his birthday so that perhaps it'll be a little more polished. But I do love the way these silly sock dolls take on a personality of their own as I stitch in eyebrows and lashes, give them hints of noses and carefully selected earrings, choose the color of the buttons to use for their eyes.

We watched Moana before the pizza and cupcakes and it was a very sweet movie and I like the direction Disney is moving. No romance whatsoever in this film, and the strongest character is a young girl. There are myths and legends from the Pacific Islands and the grandmother was a beautiful soul who reminded Hank and now reminds me of our beloved Aunt Lynn, had she had the opportunity to grow into grandma-age. She danced and misbehaved and told stories and was graceful and funny and believed in the spirit and magic and was the most nurturing character in the movie.

And then more people showed up and before it was over, all of the usual suspects were there with only a few missing. Which means the house was crowded and noisy but this is the way it is when, as Hank told me, "You have eighteen children and twenty-five grandchildren."
It does seem that those are the correct numbers, even if I know they're not.
Here's me and Levon, Jessie, Vergil, and August all crammed onto a love seat. 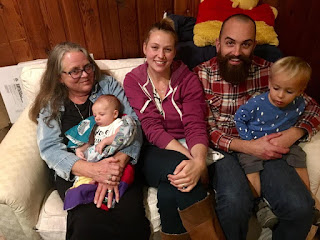 There was lots of holding going on. August wanted to sit on his Boppy to watch the movie and Gibson sat on my lap. After quite a while, he switched over to his grandfather's lap, too, saying, "You've gotten to hold me a long time, Mer."
I hugged him and let him go.
And Maggie sat on both our laps too, when she wasn't eating chips and dip.

Levon is really starting to smile and laugh and gurgle and he's just so precious. Vergil says his three states of being at the moment are sleeping, fussing, and chilling. Yep. That's exactly what he's supposed to be doing. We all adore him. Maggie and the Darling Lenore want to hold and hug and kiss him. Owen came up to him and took his little finger and said, "Hey, little dude, how you doing?" and of course everyone wants to sniff him and touch him and just get a bit of that sweet, calm baby vibe. 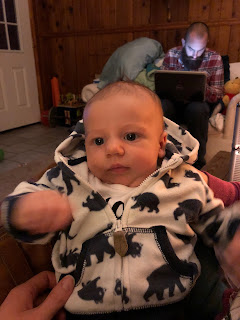 So that was Maggie's party. Sweet and simple, easy and loving. We finally got to see Rachel who was away for Christmas and she took the Maggie-kissing-Monkey picture and also the group of us on the love seat. It was so good to see her again. She and Hank have a new kitten to love, and both appear to be smitten with the little guy whom they have named Jasper.

It's not supposed to freeze tonight and it will be warmer tomorrow. Days are slowly getting longer and the chickens tell me the truth of it as they are now roosting at least half an hour later than they were a month ago. I am already thinking about getting new biddies this spring and we have got to deal with the overabundance of roosters we have. It is just not responsible chicken-tending to have so many. It is easy to be a new-age believer in peace among the flock but the difficult truth is that there are constant fights among the roosters and as I have said, the hens suffer the consequences and live in fear of unwanted and painful attentions.

One more picture of Maggie on her second birthday, taken by Rachel, playing with a a new baby in her high chair. 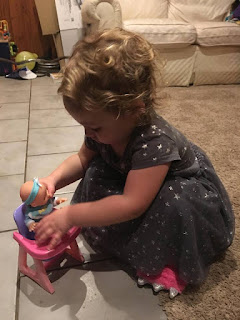 Can you see the monster slipper peeking out from under her dress?
I do believe this says it all.