I did spend time in the garden this afternoon and I had company while I was out there. First, Maurice showed up and it always makes me smile when I see her in the garden because she does her best to avoid ever appearing to want to have anything to do with me. She walked around and let the greens tickle her and stretched out in the sun, first on the dirt, and then on some hay, blinking at me with her sleepy golden eyes. She hung out for awhile before she disappeared and then the chickens showed up. 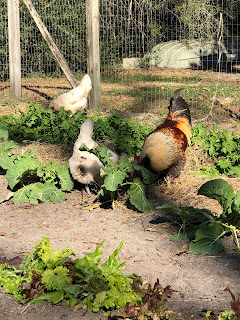 They are companionable creatures in the garden, and love to scratch through the hay mulch that comes from their nests to see what is underneath and also to nip at the greens I've planted. They sing their little hen-songs as they search for bugs and especially tasty bites of collards which they seem to like the best. As I weeded the carrots and then the beets, I kept an eye on their activities and it got interesting when Mick wallowed out a place in the hay and made his tid-bitting noise which is his call to the ladies to come and see what he has. If food isn't involved, he may be telling them that he has made them a new nesting place and that may have been what he was doing today. I've seen him do this same thing in a pot of ferns and sure enough, the hens began to lay there for awhile.
But it seemed as if he was actually just making a napping place for himself because after he'd gotten the hay just the way he wanted it, he stretched out in the dirt beneath the hay and lay there making sounds which I could only describe as being vocalizations expressing supreme ecstasy and pleasure. I desperately wanted to take his picture but was reluctant to disturb his happy time.
Finally, when Miss Lucy came into the garden and went over to him to see exactly what he was doing, I did stand up and get this shot, which is not very good, but it's the best I could do. 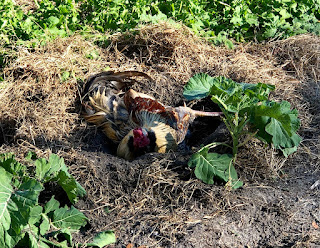 Chickens need dirt, not only to help grind up their food but also to bathe in. They spread their feathers out to get the stuff all down to the quills and fluff and stretch and shake their tail feathers to get every bit of themselves cleaned by the dirt and they love to lie there, relaxing. I would compare it to a human taking a lovely, warm bath. I've never seen Mick participate in this ritual so fully or for such a long time as he is usually keeping watch while the ladies enjoy themselves in a sunny piece of ground. But I guess he was overwhelmed with the feeling of it today and it was funny to see, but also, somehow familiar- the giving over of oneself to pleasure, the rest of the world be damned.

When I'd finished all of the weeding I felt like doing, I had to turn on the sprinklers to get them out of the garden. Have you ever tried to herd chickens? It's about as effective as herding cats or toddlers but they really don't like have water come pouring over them and so, will line up and reluctantly take their leave of the garden as I hold the gate open for them and close it behind them.

And these companionable moments in the garden today with cat and with chickens, were the highlights of my day. Mr. Moon however brought home and cleaned two ducks which I have marinating, sold a car, and finished an oil leak repair, a brake job, and some transmission maintenance on his car. Now he's going to build a fire on which he will cook the wood ducks and some sea trout.
Yes. I married Tarzan.

And in the interest of sharing what I learned last night about cooking mullet, I shall relate my experience. I always fry my mullet because frying it and smoking it are the only two ways I know to cook a mullet. For some reason, you just never hear of anyone baking or broiling mullet although I'm sure you could. So, because Jessie was here last night and she is being dairy-free right now to see if that will ease Levon's tummy through a little period of gassyness he seems to be experiencing, I didn't want to dip my mullet pieces (filets and backbones, both of which you cook) in my usual egg and milk wash before I dredged it in the seasoned corn meal/flour mixture. So, I just squeezed a few lemons over the fish and made sure that every piece was given its share of the juice by mixing the fish in the bowl with my hands and then dipped those pieces in the corn meal and flour mixture.
Then I pan fried them in a little bit of oil and I swear- I have never made better fried mullet in my life and I may never use the milk and egg mixture for fish again. Not for mullet, anyway. It was crispy on the outside and tender on the inside and we ate that fish up like we were being paid.
The mullet is a noble creature and its presence here in the waters of the coast and in the rivers is one of the main reasons that humans were able to inhabit this often inhospitable Land of Flowers. When there was nothing else to eat at all, a good mess of mullet could always be netted and fried and if you eat it the day it's caught, it is the sweetest fish in the world. It's filled with all of those good fish oils that we need but it doesn't keep fresh for long although smoking it is a delicious way of preserving it.
If you ever get the chance to eat fresh fried mullet or smoked mullet or smoked mullet dip, consider yourself blessed, say "thank you very much," and take up a fork and dig in.
I do. And now I really know how to cook it.

I have absolutely no experience cooking duck but as I said, Mr. Moon is going to grill it at the same time he grills the sea trout that the same friend gave us who gave us the mullet yesterday. As Mr. Moon said, it will not be a surf-and-turf but a surf-and-air.

I'm willing to give it a go.

There's nothing in the world that makes me happier than eating so locally that I literally know the name of the hen who laid the egg I might be eating or knowing that the greens I'm about to cook or chop up into a salad were picked and washed by me less than an hour before, or that the meat I eat comes from local waters or woods, taken by respectful hunters and fishermen who take no more than what can be used.

Just feels right.
Now if we only made our own vodka, life would be practically perfect.