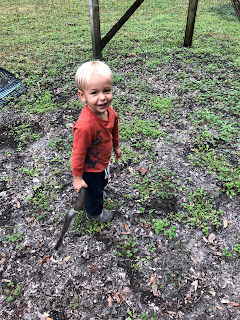 This little guy came out today for awhile because his mama had a dermatologist appointment. He is such a fun child to hang out with. He's generally agreeable with any suggestions I may have which makes things mighty easy. His brother is pretty laid-back as well, as long as someone is holding him and he gets nursed every five minutes. 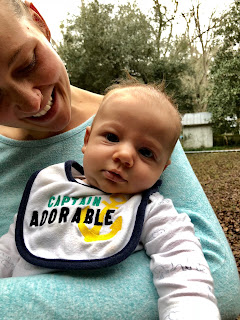 August could barely be bothered to notice when his mama and baby brother left. We were working on a puzzle by then. I got the coolest kid puzzle at the Goodwill bookstore last week. It's a Melissa and Doug puzzle and has huge pieces and is all mostly borders. Here it is while August is playing piano, waiting for my attention. 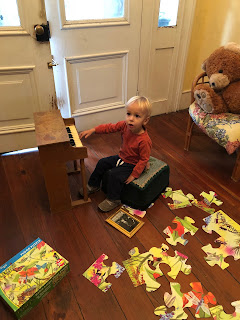 And here it is, all finished. 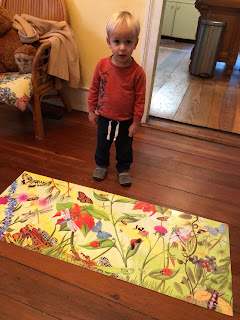 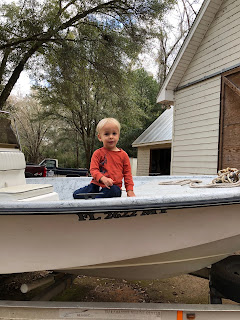 He played in the boat. 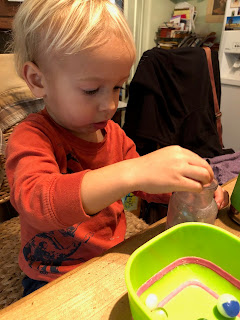 We also played put-marbles-in-an-old-bottle. The Mr. Rat puppet got involved in this game and there was uproarious laughter when Ratty dropped a marble. Turns out that rat paws aren't the best for holding marbles. We also read a whole bunch of books on the porch swing and we fed goats and chickens. Well, I fed goats and chickens. When I offered August the bread to feed the goats and asked if he wanted to do it, he said, "No, you do." He's not real sure about the goats next door and there are dozens of chickens over there which are a little bit scary, even though they are behind a fence. Mostly.
We also gardened, as you can see above.

When Mama and Brother got back, we drove to Monticello and had lunch which is where I took this picture. I know I'm his grandmother, but I think he's such a beautiful boy. 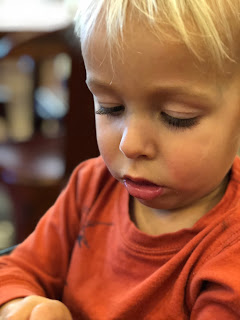 It's so interesting how much I fall in love with each of these grandchildren. It's certainly nothing I ever expected to happen, nor did I foresee feeling so much pride in my daughters as I watch them mother their children. It started when I saw them give birth, both so incredibly strong and capable in doing what I myself thought to be the hardest thing I've ever done in my entire life. And I am also in awe of how well they chose their husbands and how amazing Vergil and Jason are as partners and as fathers.
And let us not forget that quite frankly, I never thought I'd live this long. I have no idea why I thought that, but when I was a young mother, and even an older mother, the idea of grandchildren was as vague and hazy as mist.
And yet...
Here they are. Five of them. Each one unique and with characteristics and talents and abilities and personalities completely their own, just as my children were.
I keep thinking of how yesterday, when I took Owen and Gibson home, little Wiley Cash, the boy that Lily takes care of on Mondays, woke up from his nap and we could hear him. Owen raced to the room where he'd been sleeping and put his ear to the door and when he was sure that Wiley was awake, he opened the door and went right to the Pack-n-Play and lifted Wiley out and said, "Wiley, why are you so cute?"

I feel so incredibly blessed. Unbelievably so. It's like I tell my husband- I feel like I am dreaming a dream come true that I never dared to dream.
And yet. Here I am. Here we are.

And in completely prosaic news, my house smells of cat piss and I think that Jack's doppelganger, a huge gray and white feral un-neutered male, started coming into my house again when it got so cold and he's pissing all over the place, trying to claim territory. Which may be causing Jack to add his pee to the party. This is the cat that my next door neighbor who loves animals more than is even natural, asked Mr. Moon to shoot.
But at least the horrible smell drove me to finally and at last mop the kitchen which has needed doing forever. I mopped it twice and the mud room got a good swabbing too.
And now those floors feel like silk on my bare feet (it has warmed up considerably today) but it still smells of cat pee.
Dammit.

Well, that's life. The celestial and the ethereal right along with the undeniably nasty and persistent smell of cat piss.

Life on earth. We are living it.