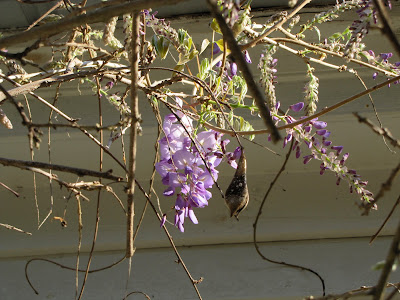 Oh, just bless our hearts on this beautiful spring morning and that damn lunatic moon is gone to hide, to sleep, to plot our nightmares. You know it is but if you can't see it, it's not there. Nigel, perhaps it is tormenting you right now at the bottom of the world.

No, this morning is full of birdsong and look! the wisteria is popping out purple and how does it do that? Those fuzzy buds turn into grape-blossoms in a matter of a moment, the sun's energy dancing from all that distance away to land here and pop out another, zoom! jette! pow! pop! Yes. Just like that and the oak trees have cut the cord on last year's leaves and sent them tumbling to earth and they are dressed in green so sweet and new that it glows in the morning sun like we're all eating psilocybin 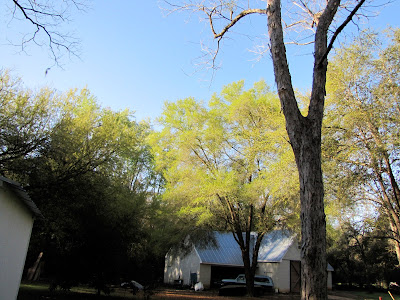 and I say that because I saw two mushrooms in the yard this morning, nestled up by the purple violets and I am glad that I am at an age where I do not need to go out into the cow fields to find those god-given mind-openers which bleed purple themselves, growing out of cow shit which just goes to show.
I'm not sure what it shows but I know this- my mind does not need any more opening because it can barely fit in what I see and feel and hear and smell around me as it is.

I have the opposite of writer's block this morning. I have all my stories and rants inside of me and if I were to put them all down here there would be a novel of a blog, or at least a novella and who has time for that? I don't. Nor do you.

But here, let me make this short:
When we left Cozumel last summer I got out of the cab which took us to the airport and as it drove away, I looked down to discover that the chain of my necklace had broken and a small, gold heart locket was missing. Gone. It was a locket that Mr. Moon gave me on our wedding day and of course I was distraught and there was no way to get it back if it was in the cab and I thought there was a chance that it had fallen into the bag I was carrying and so I searched and searched through it but no heart. None. That was last August.
And I used that bag on our trip to New Orleans this past weekend and when I unpacked it when we got there I looked down and there, right in the bottom of the bag was my heart.
No. Really.
I have used that bag since last August. I know I have. It was as if the bag held a parallel universe which, upon its own volition, opened itself up and gave me back my heart.
But that is not all. No!
When Lily had Owen last September, I lost my address book which is somewhat larger than a gold heart locket and bright pink to boot. I had looked everywhere and gone back to the hospital and searched through lost and found and it was just gone.
But when I got home from New Orleans and was unpacking that same bag which had opened up and given me back my heart, there, right there, in that bag which I don't even remember taking to the hospital at all, was my address book.

How do these things happen? I do not know.

So that is my parallel universe in a bag story and I now have no excuse whatsoever not to send Christmas cards next year. Oh dear. And of course, I have my heart back. I had thought I'd left my heart in Cozumel which is quite metaphorically true, but in reality, I did not.

And speaking of Owen (weren't we? speaking of Owen? aren't I always?) I saw him yesterday after not seeing him for four days. FOUR days, people. And I swear, it was not the same baby. He has grown taller and rounder. He has at least two new teeth. He is crawling and all he wants to do is stand up and walk. Four days! And he is now down south, visiting great-grandparents on his father's side and I won't see him until Thursday at which time I expect he will be walking and talking and perhaps running for president. And he will completely have forgotten his crazy chicken grandma. Oh, my baby. My sweet, sweet baby. Where did he go? A parallel universe, perhaps but I do not think I will open a bag to find him, not even that magical one (which, by the way, I bought in Cozumel many years ago so you see- everything is connected, all IS one, and if you've never eaten psilocybin, you can take my word for that).

And the bra rant will have to wait and so will the one about our stupid, doody-head state attorney general here in Florida who is trying to sue the government to repeal the health care reform. And the one about antique store owners who for some damn reason think that when you walk into their store you might actually be in the market for a $100,000, two-hundred-year old grandfather clock made by the Dutch. Why? Did he not see that I was wearing Crocs? Was it the fact that I was wearing Allegra's earrings that made him believe that we might need an $11,000 dining room table and insisted on taking us all over the store to show us his treasures? And they were beautiful but all I could think of was that if for some reason we could buy such treasures and bring them home that my dogs would pee on them, ruining their hundreds-of-year-old finishes? Talk about your patina.

Again. I do not know and as we all know, if there is one thing I do know, it is that I know very, very little.

But I'm quite certain that the dogwoods are beautiful, 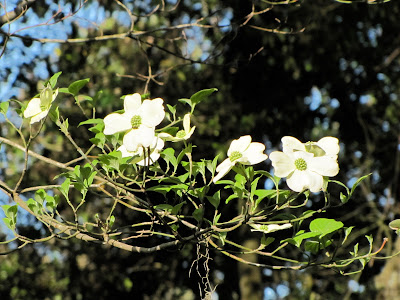 that four more wisteria blossoms have been powered into being since I started writing this, that I need to go feed the chickens and gather eggs and it is, without a doubt, spring.

Bless our hearts. It is spring and there are mysteries and the moon is sleeping and the sun is shining, sending us energy that is old, old, old, to create all this newly-birthed life and as Kurt Vonnegut said, there is just no stopping it.

And although it would appear that there is no stopping me either, there must be.
So there. I am done. This damn lunatic Moon is done for right now and the coffee is gone and there is work to do.