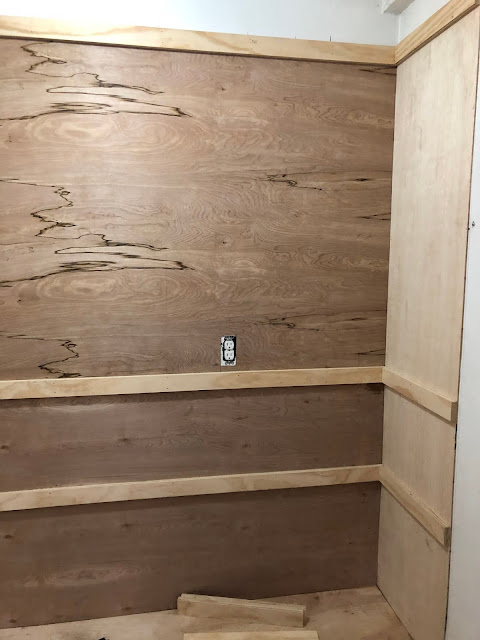 Here is the pantry project, coming along. I am so excited. Mr. Moon asked me a few days ago if I want him to paint the shelves white or just stain the wood.
"No." I said.
"No?"
"No. I want you to paint them red. Or blue. Or green would be nice."

I think we are going with a dark green like his bathroom. Oh! The smell of fresh wood and new paint! It's going to be lovely.

The sun has just come out here in Lloyd. It has been raining for days, it seems and although I do love the rain and almost never complain about dreary days, it is a sweet surprise to see the sun again. The wisteria leaves are doing a fluttery dance in the breezes, the wind chimes are tinkling.
Do you remember wind chimes like this?

The tinkly crystalline song they made?
And they were ridiculously cheap. A few bucks at most. They are so rare now as to be unavailable. I miss them.
For quite a long time now, Mr. Moon has been having shoulder pain. He's been to the doctor. He's done physical therapy. He's had x-rays. And it's only getting worse and worse so his doctor finally sent him to an orthopedist who, after examining him tentatively diagnosed a torn rotator cuff and ordered an MRI for confirmation.
Mr. Moon does not have a good history with MRI's. Turns out he is extremely claustrophobic and he was not looking forward to getting another. But today was the day it was scheduled and the doctor did prescribe him two Valium to take forty-five minutes before the procedure which he did and he was fine. Or at least that's what he told me after it was over.
We'd had an easy day and he'd done a little more carpentry work and Jessie and the boys came out and I read to those little guys and Jessie helped her daddy with the sawing of boards. I read the boys a library book which is from a series that August is currently in love with. It involves robots and bad-guy unicorns and somehow the planet Uranus. Is Uranus still a planet? I've lost track of that particular situation. Somehow there are also characters in the book who love to eat sweets including a princess, but like I said, August loves them and Levon seemed entranced too. So we read that and then we finished the Richard Scarry book and then we read Levon's choice, "Murmel, Murmel, Murmel," which is about the sweetest book ever written and which I love to read because there are so many different voices. Levon is such a funny guy. Jessie sent me this picture this morning. 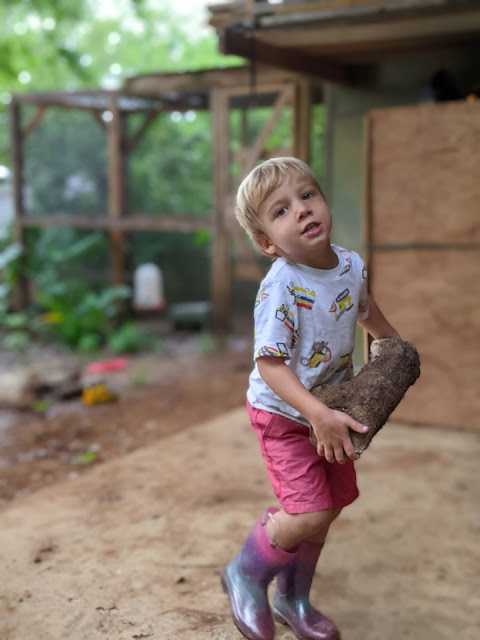 The child got up this morning, put on his new clothes and boots and went outside to unstack and restack the firewood.
For whatever reason. He's such a BOY and yet, he's so tender and sweet.
Another picture of them I got last week was this one. 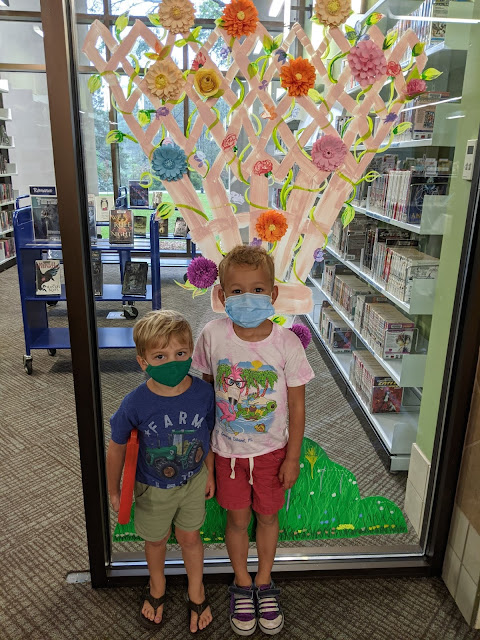 They were at the library and August asked Jessie to take this picture. "It looks like we're getting married," he told his mother.
That boy just loves love.
They both do.
I remember when Lily was about to have Gibson, and Owen, who was about Levon's age, maybe a little younger, started fixating on being married and having children. His "wife" was a stuffed orangutan with some incredibly fancy name which I have forgotten. All of the other stuffed animals were their children and he loved them dearly.
How beautiful it is to see these children go through the beginning discoveries and feelings of what it means to grow up, to love, to take part in the traditional rites and rituals, to be parents. Some of you may even remember when Owen pretended to be my father and he would take care of me. It was lovely to witness his version of how his father fathered him with such care and devotion.
I was reminded of all of this when Maggie was here and on Saturday morning, a little while after she'd gotten up she said, "Oh! I have to wake up my darlings!" meaning, of course, her baby dolls.
Her darlings.
One of the most amazing parts of being a grandparent is how we have the time and the distance to be able to truly appreciate these things. Parents don't have the luxury to really stop and ponder the small and tender things their children do. They're too busy feeding them, sheltering them, trying to teach them, discipline them, ensure that they are growing up healthy and strong and sound and potty-trained. But we grandparents- we can stop, step back, and cherish.
If we are lucky.
And I am.
And I do believe that in doing that we are important in the children's lives too. And when we tell their parents what we've noticed about how lovely their children are, we are giving them some much-needed acknowledgement, support, and love as well. Which parents don't get nearly enough of.
So that's my little perspective today. And perhaps an explanation for why we grandparents are all so incredibly convinced that our grandchildren are the most amazing children in the world. That is our job. To recognize that yes, they are, and to praise the children for being so, and to praise their parents for raising them to be so.
Yet another example of evolution. Grandparents who are not only physically but also emotionally involved in the rearing of their grandchildren contribute to their chances of growing up, which of course will hopefully result in those children passing on our genes.
Unconscious selfish behavior.
Mother Nature, as I have often said, is a tricky bitch. Her tools include hormones, lust, love, and the need to protect our young.
It's always worked for me.
Love...Ms. Moon
Posted by Ms. Moon at 7:12 PM