How To Make Soup. Or Not.

Well, I'm trying out my ability to make only five liters of soup. Actually, I need to make less than that so that the pot doesn't boil over. And the only reason I'm making soup is because there are so many leftover containers in the refrigerator which need to be condensed down (up?) to one large leftover container. Of soup.
As I always say- I am highly skilled at taking leftovers and making more leftovers from them.
Generally, they are tasty but I am having my doubts about tonight's soup. It's going to include everything from a leftover stalk of Bok Choy to kale to onions to chicken to green beans to spinach and rice casserole to garlic to...and this may be the deal killer...leftover vegetables au gratin. Sort of. Which I made with vegetables (duh) and leftover scalloped potatoes.
So. We shall see.
I have foccacia rising which may save the day.
Here darling. Have some focaccia for supper.
I'll let you know how that goes.

It's been a nice day over here. Mr. Moon fixed the floor in a different outside baby chick residence box and he's been working on his bathroom. I love it. There's a phone call for him and I go to find him and yell out, "Honey! Where are you?"
"Under the house!" he says.
"He's under the house," I tell the caller as if this were the absolutely most normal thing in the world.
Which it is around here.
I did a little more invasive plant pulling and of course, chick tending. I cut up a grand amount of kale greens and grapes and the little sweeties ate them up like they were strawberry rhubarb pie with homemade vanilla ice cream on it.
(I've been craving strawberry rhubarb pie and actually, you can keep the ice cream.)
I took the trash and did a lot of sweeping. Not as much as I should have.

Okay. Do you want to see the cutest picture in the world? Here it is. 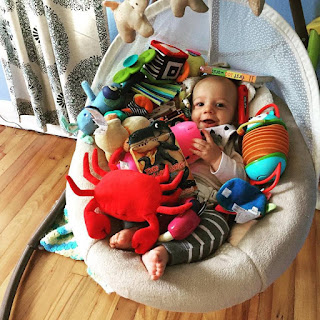 Jessie and Vergil left Levon in August's charge for one minute and when they got back, August had brought his brudder every toy he could pile in with him. Jessie often asks August to get Levon a toy if he's being fussy and it looks like the kid's been paying attention.
Levon looks pretty happy, doesn't he? I especially like the book on his head.
As Jessie said on Facebook which is where I stole this picture, "Well played, boys. Well played!"

Here are a few more pictures but they are not cute. 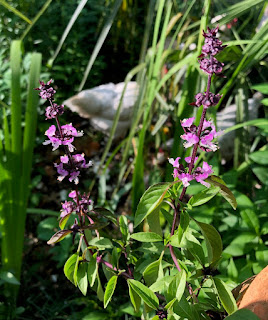 The teeny-tiny blooms of the Thai basil. Can you see the chickens in the background? 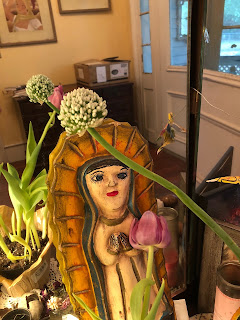 An actual and real blooming onion. I picked a few onions for the soup and they have already flowered and I could not bear to just toss the flowers. They are actually quite lovely. 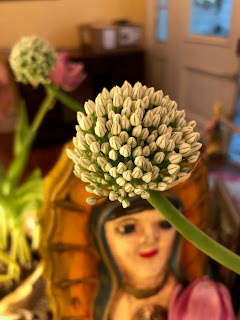 Close-up.
Jessie gave me the poppies you can also see.

And yes. My hallways does smell a bit like onions. There are worse things for hallways to smell like.
(Remember when I had the old, incontinent dogs?)

And last but not least, here is a picture of Crazy-Eye Mick. 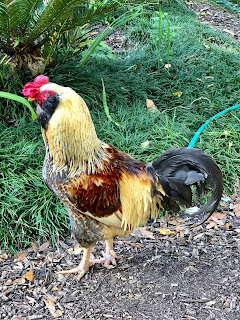 If you take the notion, click on the picture and really look at the intricate designs and colors on that fierce boy. Also, the way he is feathered. He is a fine looking rooster and he takes good care of his little flock. I am really hoping that if there are any roosters in the new batch of chicks, that it's only one but the odds of that are not good. I seriously do not want to go through the whole rooster drama again but you get what you get.

Once again, that's about it for news from Lloyd. Tomorrow is Sunday and perhaps I'll invite all the grands out for sweet potato pancakes and bacon and eggs, depending on how I feel.

Tonight is Pride Prom in Tallahassee and Hank is going to be the MC. He says it's because he's got a PA system but I think it's because he's famous and is fantastic in front of a crowd.
I sure am proud of my kids. All so different and all so completely who they are.

Here I go to deal with the soup. So far, it has not gotten out of control as to amount. I hope that's not the best thing I will be able to say about it.