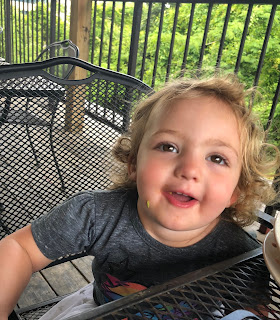 We had our semi-traditional Thursday luncheon at El Patron today. It was perfect weather to sit outside and we had almost the entire deck to ourselves the whole time which is a pretty good thing in that we can get loud and the children can get, well, childish. On the whole though, we were all rather civilized today and Maggie and August played together at a vacant table, creating a game of Peek-a-Boo that cracked them up so much that we all laughed and laughed. It's so beautiful, watching these two cousins, so very different from each other, start to truly engage and communicate and have fun with each other.
Maggie wore her pupple shoes today and August wore his new sunglasses.
They are definitely the cool kids. 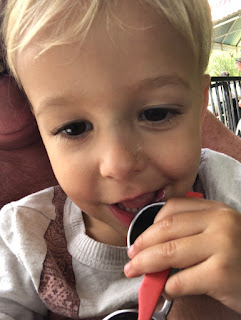 I didn't have a lot to say today but I surely did feel like a queen as Maggie and August took turns sitting on my lap. I love having them there, right where I can lean over and smell their still-baby heads. I sniff them and rub my cheek on their soft heads and it's a sort of ecstasy for me.

Levon was in fine form and was passed about as babies should be. 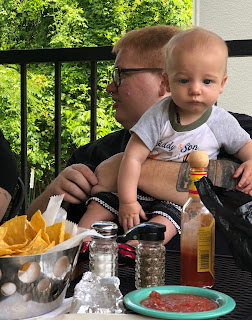 Oh, how he wants to get his mouth on some food. Hot sauce? Salsa? Bring it on!
Here he is with Rachel. He appears to be quite comfortable, doesn't he? 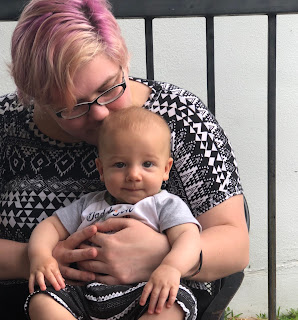 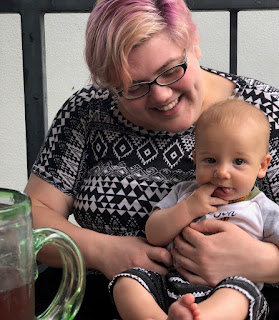 He and Rachel were clothing-coordinated today. I think there was a memo.

And so we ate our delicious foods and various topics were discussed including how we think that Owen is starting to look like his Aunt Jessie and what we're going to do for Jessie's birthday and Lily's cruise and the Netflix series Trailer Park Boys and so on and so forth.

After we said our southern good-byes (which requires at least ten minutes in the parking lot hugging and kissing and exchanging last-minute messages), I went to Goodwill which I have not done in forever. It wasn't very exciting but I did get a pair of overalls and also bought a dress/tunic which I'm not sure anyone I know can actually wear but it was so beautiful, made of silk velvet that I couldn't leave it there. So I didn't.
On to Publix where I got to see Lily again and then home.
Mr. Moon's been resting with his foot up for most of the day which again, I insisted he do. He tried to tell me about all the things he HAD to do and I pointed out that if he ends up in the hospital he's not going to get anything done for awhile.
He got good news today in that the Credit Union he wanted to be affiliated with called him and said, "Your office is ready!"
He's so excited to be back with that Credit Union attitude which is all about helping its customers. And they seem to be excited to have him as part of their team.

And so it's been a good day although when I got home I wanted nothing more in the world than to go lay down on my bed and rest. I did take a walk this morning, although not a very long one, and I was just so tired. But chickens needed tending and some chores needed doing and so I managed to stay upright and get things done.
Speaking of chickens, here's a few pictures from this evening. 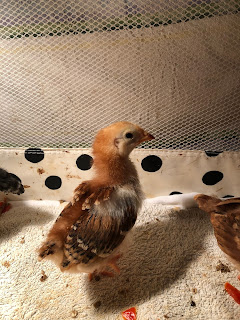 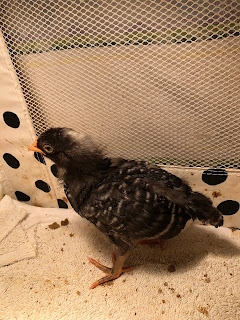 One of the Barred Rock babies. 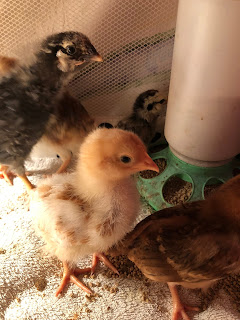 A Dixie Rainbow Chick. I think.

Yeah, we need to start naming these babies.

Okay. Did I provide enough cuteness?
I hope so.
It's the service I provide.