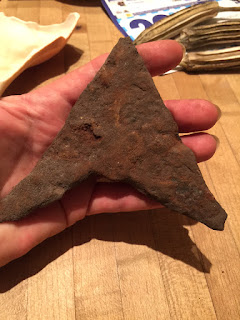 There's the plow point I found yesterday in the garden. You'd think by now I would have uncovered everything of interest in that garden but no, I have not. I sink my trowel into the dirt and it hits something and usually it's an oyster shell or a bit of old brick or bottle but sometimes, it's more interesting.

Phew. I'm breathing again. Not sure why. I haven't actually CALLED my NP's office although I did send an email via their website. Have they answered? No. They have not.
I swear. I need to change practitioners.
Like that's going to help.
The last two doctors that I felt vaguely comfortable with were, strangely enough, men.
One was the resident I went to when I was going to a Family Practice Residency program for my physical to get into nursing school. Why did we have to have a medical exam to get into nursing school? Who knows? But he was a great big warm bear of a man and he joked with me and made me feel comfortable. Of course he left Tallahassee when he graduated and is now the beloved community doctor of my favorite people over in St. Augustine. I've seen him since at parties that Lon and Lis have had and after Lis got her surgery, he called her EVERY DAY to see how she was doing. No bullshit, just caring and concern and good, sensible advice.
I swear to you, I'd see if he'd be my doctor again if St. Augustine wasn't three hours away.
The other doctor who didn't give me the complete willies was a doc in Tallahassee. I don't even know why I quit going to him. Maybe because I had a suspicion that he was getting a bit too friendly with the cocaine. But fuck! Who cares? He diagnosed a situation with Mr. Moon that saved his life. He's still practicing but only under the auspices of a health plan which we do not belong to.
And there you go.
I started going to the woman I'm seeing now because I heard she was open to alternative medicine, which she is. But goddam it, don't suggest to me that I might need triptophan for life-crippling/suicide-thinking anxiety and depression. Just don't. Yeah. I'll take triptophan and whatever else you recommend (and sell). Along with whatever the fuck pharmaceutical will rearrange my brain in ways that exercise and meditation and supplements and so forth and so on will not and can not.
Oh Jeez. It's overwhelming.

Anyway, I did have my boys today. When I was with just Gibson at their house, he crawled up in my lap and clung to me like a baby chimp and pulled my head to him so that I could kiss him and kiss him on his cheek and neck. He fell asleep on our ride to go pick up Owen as he so often does. When we got home and settled in, we walked down to the Post Office and then to Papa Jay's and once again, it was closed. Is Papa Jay's closed on Monday? If so, POST YOUR GODDAM HOURS, PAPA JAY. The boys were so disappointed. We came home to the MerMer restaurant and they ordered chips and pickles and Cheerios. Then Owen did some Rolling Stones hallway dancing and I got some good videos but they're too long and I'm so damn stupid (anxiety brain plus age) that I can't figure out how to give you the part I love the most when he did a move to a slow part that he called, "Releasing a bird," which was so graceful but which he sort of hated when he watched the video.
"It was like I was doing ballet!"
"Yes!" I told him. "You let the music tell you what to do. And Mick Jagger does ballet."

Hell. I just tried to download the full thing and it's too long. I've tried to edit via my phone, Quicktime and iPhoto and I can't do it.
Well, trust me.
It was beautiful.

Mr. Moon has gone to auction and so it's just me and Maurice again. Tomorrow I'm going to go to Costco and lunch with Lily and Jessie and Gibson and who knows what all?
And goddam it. I guess I'll call my nurse practitioner's office.

Here's one of the watermelons growing in my garden. 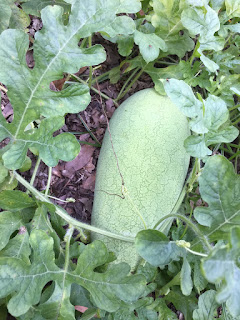 I would say it's probably about the same size as Jessie's baby WHICH IS GOING TO BE BORN IN LESS THAN A MONTH!

I swear to you- I still don't believe it. And yet, it is true as true and soon, once again, life will be redefined and refined and made finer and the world will microscopically shift and change to welcome another baby. A baby born of love and intention and joy.

I breathe out again. I let out the worry and the illogical, ridiculous fear. I try to take in the reality of all that is good in my life which is more than anyone could ever ask for.

I am just one tiny, minuscule particle of energy in this universe which is so vast that the biggest and best of our human minds can't really explain it.
Which I find incredibly comforting.

And soon, there will be sleep, even with its crazy dreams.