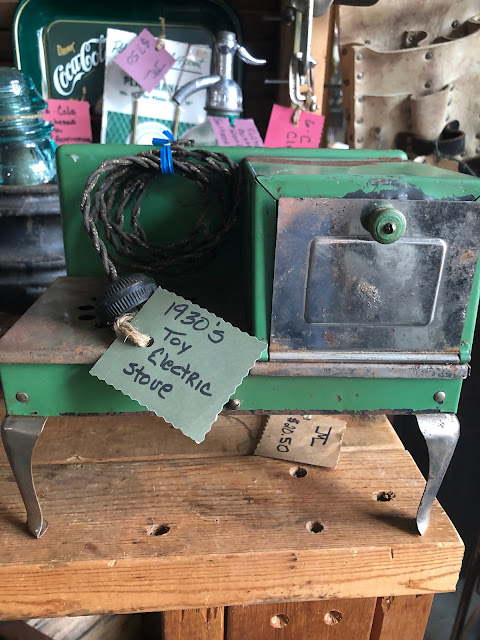 Lis and I met in Monticello today and went to the antique store we like. I spied this little pre-Easy Bake oven and showed it to Lis.

"Take a picture of that," she said, "And put it on the blog."
She is the boss of me. This is well-established and I agreed with her about this. The toys of yesteryear.
"You guess that thing got hot?" I asked her.
We laughed.
Oh, the things we used to let children play with! Ovens made of tin that plugged into an electric socket. BB Guns that could shoot an eye out. Lawn darts that could and did pierce skulls and kill children, chemistry sets that contained uranium- look it up! We gave children pocket knives and woodburning kits. I burned myself badly on one of those things.
All kinds of things that were considered fine for children to play with are now illegal and we shake our heads in wonder- what were people thinking?

And yet.
And yet. An eighteen year old high school drop out can legally purchase a rifle capable of killing at least twenty-one people in a very short amount of time in a school after he shot his grandmother in the face.
The state of Texas, like the state of Florida, can somehow manage to legislate against a woman's personal control of her body and make it practically illegal to be a gay kid but they sure as fuck can't do a thing about gun control because that's an American Freedom.
Unlike a woman's right to choose.
Unlike our right to speak out.
Unlike the right of children to learn the actual truth of our history as a nation, as a state.
It's not only our right to carry a weapon whose sole purpose is to kill other human beings but our sacred right, guaranteed by the Second Amendment, written when a gun was a musket that at best could probably kill one human every fifteen minutes.
Children. That guy killed nineteen children. In elementary school. Children like Maggie and August, and Gibson. I didn't mention Levon and Owen because Levon's in preschool and Owen's in middle school and these were elementary kids who were slaughtered. And more wounded. And all traumatized for life.
And two teachers.
You know. Of course you know. The whole world knows.
You know else what the whole world knows? That America has shit for brains and guns for dicks. That Americans are insane and governed not by men and women who care about the lives of their children, their fellow citizens, but about what the NRA can give them in the form of funding and political support.
And they are right.

I see that Beto O'Rourke interrupted a press conference in Uvalde, Texas today which, until yesterday's slaughter was best known as the hometown of Matthew McConaughey, where he confronted Governor Abbott saying, "This is all on you." And then, "You're doing nothing. You're all doing nothing."
He was escorted out of the building and Abbot said, "It's God that heals a community."
Among other bullshit.
The mayor of Uvalde, Don McLaughlin ordered O'Rourke out of the building and called him a "Sick son of a bitch who would come to a deal like this to make a political issue."
This is not a political issue. This is a public health and safety issue. This is a moral issue. This is an issue that the so-called religious right should be speaking up about with vehement fervor to protect the children but no, they're too fucking busy trying to defend the rights of an embryo to care about the children who are here and who suffer and bleed when they are shot by an AR-15 "type" of rifle. And leave behind families who will never, ever cease grieving.

That's really all I have to say tonight.