You Say Potato, I Say Amen 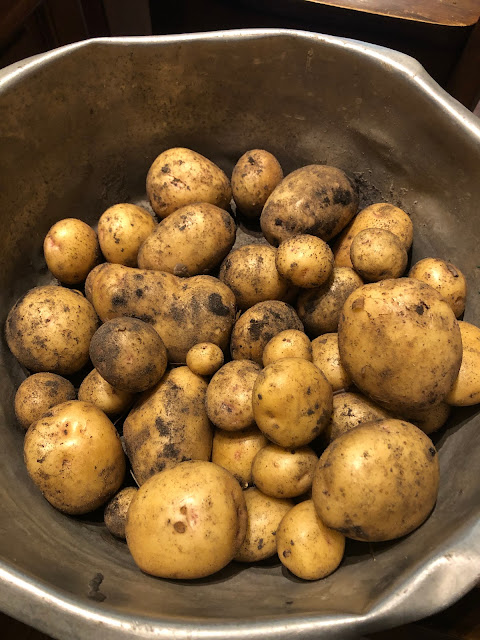 Mr. Moon, despite not feeling his best last night, went out and dug up the smaller of the two potato patches. You're not supposed to dig them up until the vines flower and then start to die but little black grasshoppers ate our vines cruelly and they never did bloom. Somehow they still managed to make potatoes. The little grasshoppers are the nymphs of the huge Georgia Thumpers that can decimate a garden in an hour. The babies can do damage too. I need to spread those potatoes out and let them dry and then store them in a cool, dark place.

I haven't had time yet though and it may not be until Sunday that I get around to it. This afternoon I had Mer duty with August and Levon and I just got home. Mr. Moon joined us for part of the time which was nice. He played cards with them. We had a nice relaxed afternoon. I read some Fantastic Mr. Fox which is the most fun to read out loud. Levon gave me the highest praise saying at one point that I made Mr. Bean sound exactly like he was supposed to sound.
I blushed in pleasure.
We also watched a few National Geographic videos about sharks, one of which was about Megladon, the largest fish to ever swim the seas, and extinct now for almost three million years and let me tell you this- if they were still around, I would not ever swim in the ocean. Never, ever, not once. Those bad boys (and girls) grew up to almost sixty feet long and they snacked on whales. It is one of my great life ambitions to find a Megladon tooth but since I've never even found a regular shark's tooth, I doubt I will. I have no idea why I've never found a shark's tooth. Some people find them every time they walk on the beach and I've been walking on beaches since I was able to walk. I guess my eyes are not attuned to them. Or something.

I'm happy to report that August's pick-up went so well today that he did not feel the need to give me any suggestions as to how I might improve. I not only got there in plenty of time but I also stood right in front so he could see me. An old Mer can learn!
I take them some sort of treat every Friday that I baby-sit but I try to make it a not-horrible treat. Today was fruit popsicles which they ate outside. 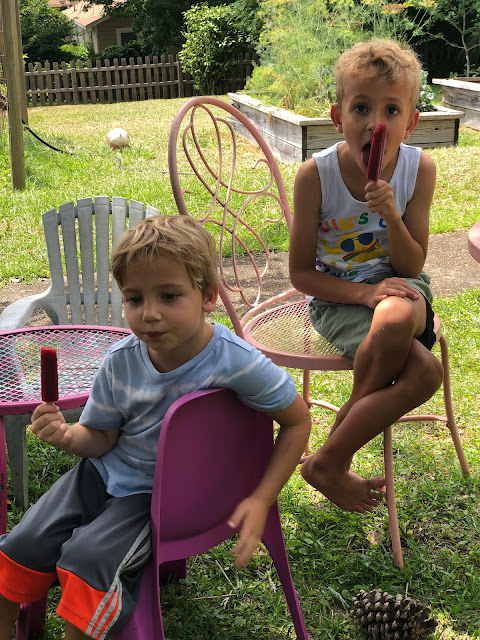 One of these days I'm going to just go for it and get them some spray cheese in a can and crackers. My mother used to keep that mess around for my kids and they still talk about how much fun it was, how much they loved it. What else are grandmothers for but to introduce children to foods their parents would never have in the house?
Besides playing cards with their Bop, they also helped him with Wordle, meaning that he let them hit "enter" for him. 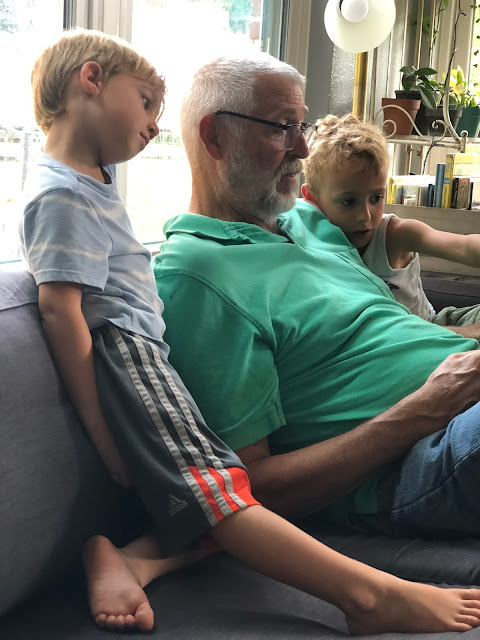 They love that man so much that even this activity, done with him, is fun and worth doing. When he showed up at the house and got out of his car I said, "Hey, y'all. Look who's here. It's Boppy!" They were so happy. Levon said, "I love Boppy," and August ran for the door to open it. They jumped on him like baby monkeys on a mama, wrapping their long, skinny arms around him. I sat and watched, sighing. When they see me it's all, "Hi Mer."
And that's pretty much it. Although August does reach for my hand when I pick him up at school and we walk to the car. Believe me- I treasure that.

So obviously we've felt better today. Much better. And tomorrow I will be picking up Lily and Maggie and Gibson around noon to take them to the annual dance recital. Tickets are limited so I'll be going, but Glen won't be able to. I remember last year's recital and how that was the experience that finally kicked my ass into going to get new glasses. I could not see my babies on the stage and that just would not do. Gibson will be dancing in the hip-hop numbers, Maggie in the beginning ballet (I think) and tap. It's funny how busy I still am with children and their activities. I feel lucky that I live close enough to my kids and their kids that I can do these things. It must be so hard on grandparents who live far away from their grandchildren. I know that visits and Zoom and texting can make it all so much easier for everyone to stay in touch but there's nothing like being able to go to recitals and do school pick-up occasionally, and just get sweet, quick visits. As I always say when people ask if my kids live nearby- "Yep. Close enough for me to get my arms around them when I need to."
Speaking of staying close, here's a picture I took last night when I went to close the chickens up. 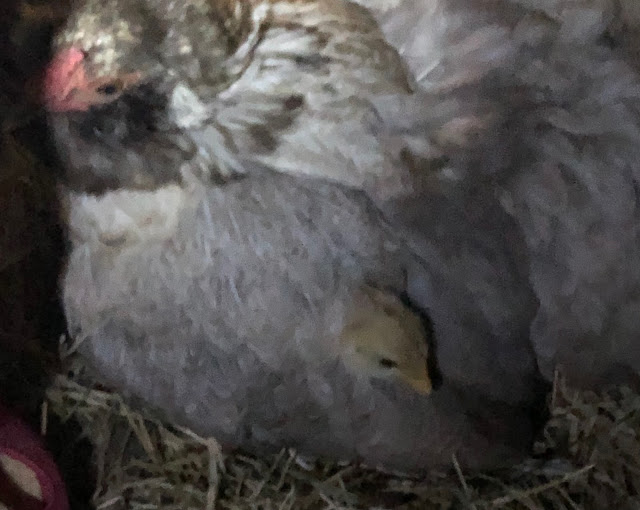 It was dark in the hen house so that was the best I could do but isn't that the sweetest thing? Little Pansy, enveloped in her mother's soft downy feathers, as safe and warm and cozy as any child anywhere on earth could be.