Although I was lazy as a lizard today, I feel like I got something huge accomplished in that I sent in a request to book a place near Black Mountain, NC, for us to stay when we go up to visit the Weatherfords this summer. This has become a much-beloved ritual for us, to travel up to the Smoky Mountains and stay for a few days, enjoying the views and vistas, the rocky rivers, the charm of Black Mountain, and of course Vergil and Jessie and the little boys we miss so much when they leave to go join their mountain family.
For some reason, this year I just did not stress out about finding us a place to stay. Of course there is always the FOMO- fear of missing out, not to be confused with MOFO which Mr. Moon did immediately upon me explaining what those initials mean.
I'm pretty sure he did that to make me laugh. Which it did.
There are hundreds of listings on VRBO for the Black Mountain area, not to mention the ones on AirBnB and the hundreds more for the Asheville area. So of course I want to make sure that I am getting the BEST place to stay for the money and I've already spent a few days clicking and scrolling, clicking and scrolling.
Our priorities are to be somewhat near where Jessie and Vergil stay on their mountain and that the place has some privacy. I have no desire to be on top of anyone else's hideaway cabin. We need at least one king-sized bed with no footboard for my giant man, an extra room or two for when August and Levon join us for the night and bring their mom and dad along. A kitchen that I can cook in (which would be almost any kitchen) and a big table where we can all eat. Almost everything else is negotiable but this year we decided to go for it and I found us a place with all of that AND an outdoor hot tub, plenty of room, lots of windows, and a little burbling creek.
And if that creek doesn't burble, someone's going to get an email about false advertising.
Nah. Not really. But won't the boys have fun playing in a creek?
I think it will be lovely. Of course you have to send in your request and payment method and then within 24 hours you're supposed to hear back as to whether or not you've been accepted. I think I have a decent profile on VRBO and if all goes well, we are good to go.

I am excited about the prospect of this trip. We've done it enough now that I don't have a great deal of pre-trip anxiety, of fear of the unknown. Mr. Moon and I have already been reminiscing about former trips and the things that made us laugh and the things we surely want to do again and the things we surely do NOT want to do again, one of which is to stay at a Quality Inn on the way home which although there were no actual bloodstains on the walls, still managed to transmit a feeling that an episode of CSI Buttfuck, Georgia may have been filmed in it.
There was a Waffle House across from the parking lot which, although a plus, did not begin to redeem the creepiness or smell of the room.
So we are excited and now I have to figure out a book for me to read out loud on our journey as we drive.

I told Mr. Moon this morning that despite what my weather widget said, I thought it was going to rain because my old hips ached so much. And sure enough, later on this afternoon as we were lazing about, a sudden boom-blast of thunder hit close enough to make the window above us rattle.
"Whoa!" we said.
And before long, we were getting another downpour.
It was beautiful. 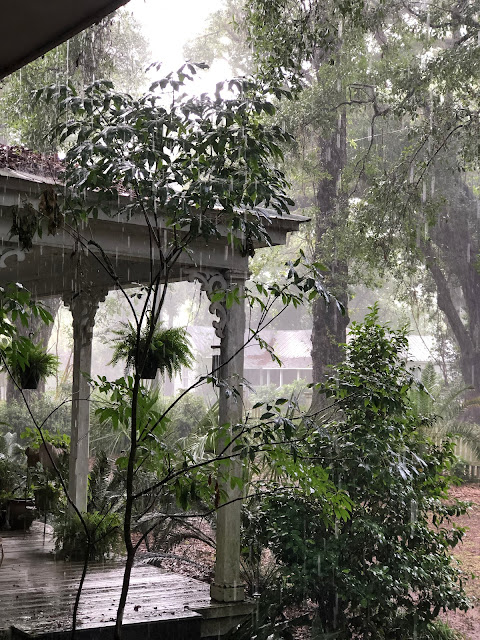 It did not last too long but long enough for it to cool everything off and make the air feel soft on my skin, to hopefully bring up some yummy bugs for my chickens to scratch out of the earth, to give the garden another drink of sweet water.
Chicken story of the day: This morning when I went to let the chickens out of the hen house and throw them their scratch and fill up their feeder, Violet's little baby had failed to follow her out of the coop and was frantically trying to get to her mama through the wire. I have come to think that this is part of the mother hen educational strategy because Darla just did the same thing last week and I've seen it happen before. Generally, the mother does not get far enough away from the chicks to let this happen but perhaps, in a safe, controlled environment it can be a teachable moment to let the young'uns try to figure their way out of the coop. So Violet's baby (shall we call her/him Pansy just for fun?) was peeping and peeping and peeping and trying to squeeze her little body through the even smaller holes in the wire and because she was in a corner I was able to scoop her up, intending to take her outside, thus probably setting her training back a week or two, and Darla, who was already outside near Violet with her three lost her mind and flew up and bumped me when I got outside. It wasn't even her baby and she was in attack mode! Whoa girl, I said and gently put Pansy down next to her mother and Darla went on about her business, convinced, I'm sure, that she had saved that child's life.
She is a good mother.
There is a woodpecker busily searching for bugs in what sounds like a rotten tree limb. It is making a loud, hollow sound and reminds me of a New Yorker joke that I saw today that made me laugh. 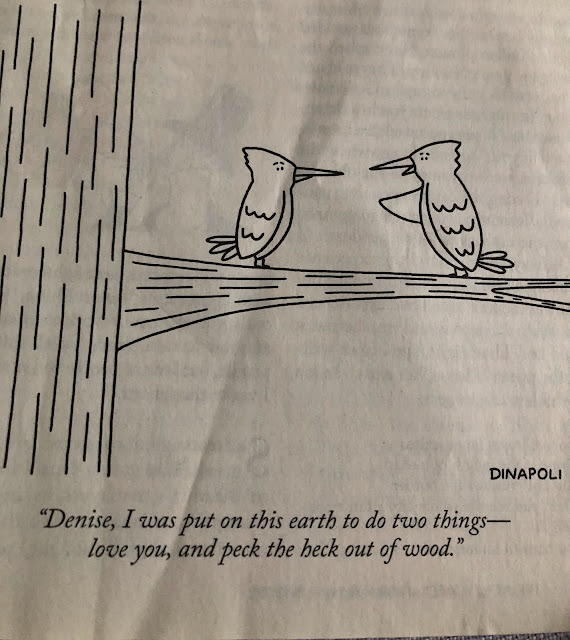 And for those of you have been wondering what old Jack looks like these days, I give you this. 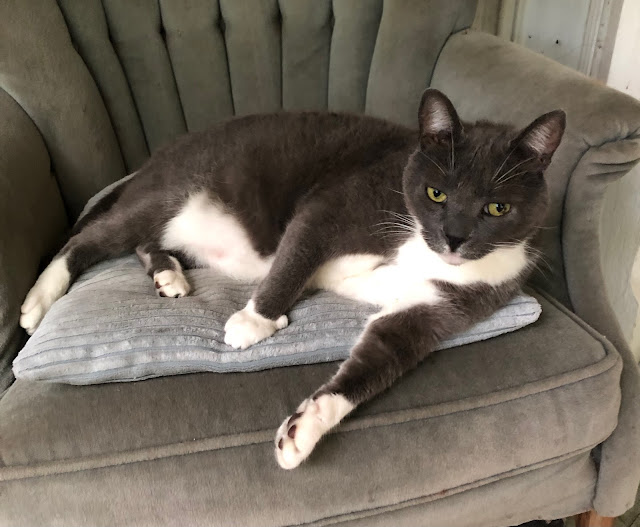 The bane of Maurice's life, the big boi who sleeps wherever he wants, whenever he wants, the man with no plan, the King of the Porch.
Jack.
Love...Ms. Moon
Posted by Ms. Moon at 6:39 PM