Every Day Is Part Of Our Legacy 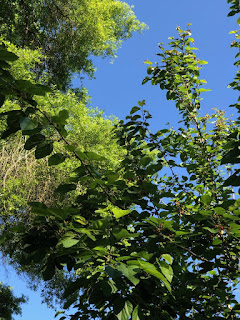 How's that for a nice blue sky? And can you see the mulberries? I can't believe how fast that tree has grown. I know I planted it less than five years ago and it reaches way up into the sky. The birds will probably get most of the berries and the squirrels will get a goodly few as well. I know the chickens love them. When I bought the tree the guy at the nursery tried to convince me that I needed two of them for proper fertilization. I didn't think that was true. It would appear that I was right. 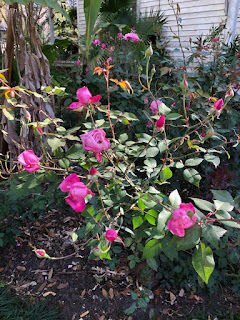 We're getting roses and roses and roses. See all the buds? I have no idea what variety that is and it really has nothing much to recommend it other than the fact that it is certainly hardy. Some heirloom.

Today was a go-to-town day. I took two loads of laundry over to Jessie's to wash in her new washing machine. We put a load in and then took off to meet Hank and Rachel, Lily, Lauren, Owen, Gibson, Maggie, and Boppy for lunch at Japanica. Lily decided that it would be fun for us to do the hibachi lunch. The kids have been on spring break and this would be lunch and entertainment all at the same time. It was fairly successful. I probably laughed more than the kids did although Gibson kept saying, "I know this trick!" which I thought was hysterical. This wasn't his first hibachi rodeo. 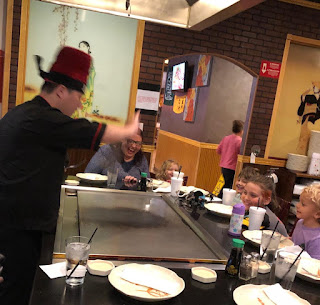 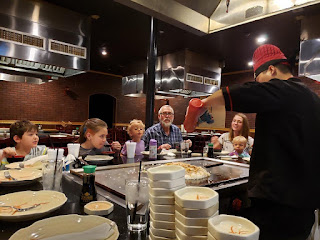 August did not like it when the chef did the fake soy sauce squeeze on him and when he lit the whole grill on fire, Maggie got very upset. 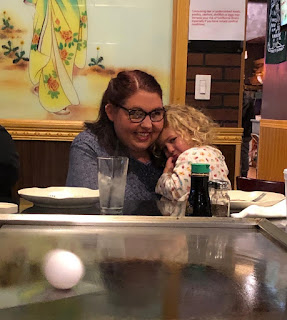 It was pretty dramatic.

Rachel and Hank were amused. 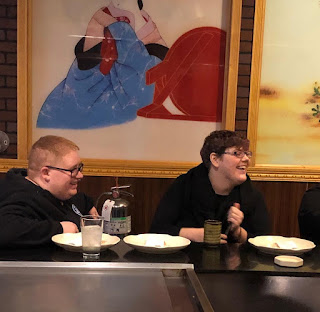 It's all so corny but it's cheaper than Disney World for sure.

After lunch I went back to Jessie's house and did another load of laundry and did a puzzle with August and then we read a book about pirates which was pretty good and I got to use my pirate voice. Levon played with his tractors and trucks and bulldozers. When the clothes were done I ran the errands I needed to do and finally got to the Publix part of it all where I got stuff to make tacos. Owen is spending the night and he really wanted crab legs but he reckoned that tacos would do.
I picked him up on the way home and of course it hurt Maggie's feelings terribly that she wasn't coming too. Gibson was already engaged for the evening with his other grandmother and the family of Darling Lenore. And we haven't had our Owen over by himself for quite awhile.
He helped me bring in groceries and gather eggs. He pulled some carrots and kicked a bamboo and now he's making soup with some of the shoot he kicked and then cut up as well as a few carrots. 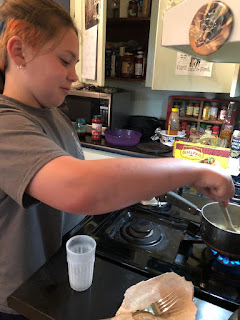 I tried and tried to tell him that the bamboo was not going to be edible but he is persisting. It's been cooking for about an hour now and it's still not tender.
Oh well.
He's a sweet boy and I sure do love him. Can you believe how grown up he is? His wrists are probably thicker than mine. He's my first grandbaby, the one who named me. I often feel almost an obsessive need to pass on things to him. Stories and advice for instance. I told him today that if he uses a lid on a pot the liquid will not escape as fast and that the heat will stay in and it will cook on a lower temperature.
And then I said, "That's a little cooking lesson for you. Some things you can learn from someone teaching you and some things you just have to learn for yourself."
This is one of the few things I do know for a fact and one day Owen will know that too, as we all eventually learn. This may sound morbid but I truly do wonder what my grandchildren will remember about me when I'm gone. I suppose there is a part of me which is vain enough to think that as long as I am remembered I will be a part of their lives. In a perfect world they would remember me as a wise and affectionate and slightly insane old lady whom they never doubted loved them with every ounce of her being even though she was vastly imperfect and sometimes silly.
Mostly though, just the part about loving them.
One of my favorite book endings is what Larry McMurtry wrote in his novel, The Evening Star, which is the last of the series of books he wrote about Aurora Greenway which began with Terms of Endearment. As the book progresses, Aurora gets older and eventually has a stroke but one of the things she can still do is to play music on a little CD player for one of her great-grandchildren who was a baby. The book ends with that boy all grown up and going to a concert where one of the pieces his grandmother had played for him was performed and for some reason he cannot figure out, he becomes completely overwhelmed. The piece was Brahm's Requiem.

"Suddenly, in the midst of the Requiem, to Henry's surprise and Sid's total amazement, Henry put his face in his hands and began to cry. His chest was heaving- he was overcome. Before he knew it, the music had taken him to another place- to an old place in his memory, to a place so old that he could not really even find the memory, or put a picture to it, or a face. He just had the emptying sense that he had once had someone or something very important: something or someone he would never have again.
Walking home in the summer evening, Sid had not totally recovered from her amazement, nor Henry from the memory that had not quite been a memory. He was there- or mostly there- walking with Sid on Columbus Ave. But some of him was in another place- some of him was absent. Sid knew it too- she held his arm and looked at him differently.
"Boy," she said. "You were really upset."

I love Larry McMurtry. I just do. And I think that ending to the book is perfect. And it describes what I would like my grandchildren to feel when something triggers them which releases some memory of me. Not an emotion you could describe as "upset" but something so very deep. That sense that they had once had someone or something very important.

Of course for my grands it'll probably be more along the lines of hearing Honky Tonk Woman or Keith Richard's beginning guitar rift for Satisfaction.

I better go make some tacos. Owen can mash the avocados for the guacamole and chop the cilantro. And by the way, he tried his bamboo shoots and declared that they tasted like "Nature's poop."
"Well," I said, "I'm sure you learned something and that's what matters."