Pictures From A Day 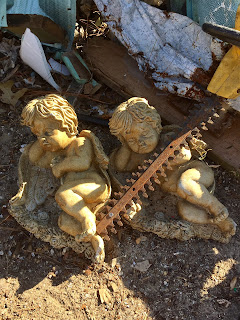 I found those two cherubs at the dump depot, lying just like that with the saw blade dangerously close to neck and feet and I took their picture and then I took them and put them in my car.
I have no idea why. They are pretty heavy. I guess they're cement.
Right now they're keeping watch on my back porch steps and they're so tacky and so ridiculous but who could leave cherub angels at the dump depot?

I walked again today and tried very hard to walk fast and to remember to walk from my shoulders, not my hips, the way that physical therapist guy told me so long ago and it's hard but I don't think my hips hurt as much when I do this. 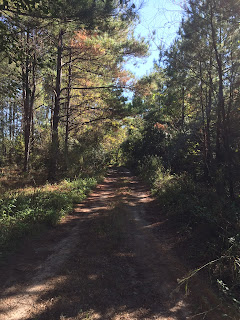 Pathway to the horse farm. 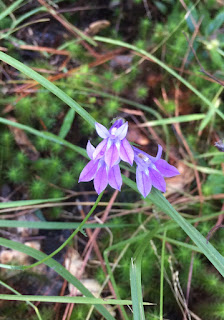 Beautiful little blooms whose name I do not know but I think it may be a type of Lobelia. 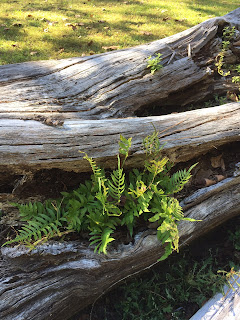 A fern which has taken root in a fallen oak which is so weathered that it looks like driftwood. 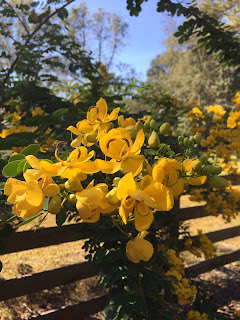 A beautiful yellow-blossomed tree that I definitely should know the name of but do not. It is growing in someone's yard. I do not know his name either.

So I walked and I cleaned out the hen house and I did laundry and all of that blah, blah, blah that I do and I also put the last stitch of embroidery in King Richard's quilt. Jessie has finished the blanket she knit for him and so now he can be born. Doing this embroidery has made me want to do more and maybe I will start on a crazy quilt soon. I've always wanted to make one. But where does one find velvet scraps?
While I embroidered I watched a documentary on Joan Didion. The Center Will Not Hold.
It was well done but mostly very sad. Joan Didion has always seemed to me to be a rather sad person, or at least introspective to a dangerous degree but of course that is where her art comes from. She has grown so very, very thin that it is hard to believe that she is still capable of such powerful words, but she is. She is a writer.
She writes.

And now I have a shepherd's pie in the oven and an extra in the freezer for after Jessie's baby comes. Lon and Lis are coming to stay with us this weekend and they were here when August was born and so...who knows? Maybe the little guy will want to come out to meet his fairy great-godparents.
I become so superstitious when babies are about to be born. It feels like a time when all of the magic available is welcome. Not that the birth of a baby doesn't contain enough magic on its own. Of course it does.
A life, created by two cells, grown while nestled in his mother's womb, fed with her blood and bathed in what might as well be sea water, works with that mother as their bodies conspire together for him to be born when it is time and then he is and there he is, a child, a baby, a wonder to behold and to hold and to love.

Time to make a salad.