Strangest walk ever. Except maybe for the time the sheriffs were hunting for a criminal and advised me to turn around and go home.

Took the sidewalk for a shorter walk because I have so very much to do today and had to duck behind an old broken down house to pee and accidentally walked through a web and the spider, a golden orb weaver, got on my own personal body and I thought I brushed her off.
I continued with my walk and found another beautiful blooming thing that I have no idea how to identify. 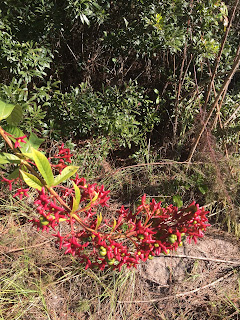 I snapped off a piece and brought it home and then continued on to the post office where many packages awaited me. Beautiful! I was toting them home when a guy stopped me and we had a very long conversation about people who used to live in Lloyd, etc., and that was fine except that I was carrying a big box and also, sort of in a hurry.

Finally got home, felt something on my neck and realized that the spider had been traveling with me for about 45 minutes. 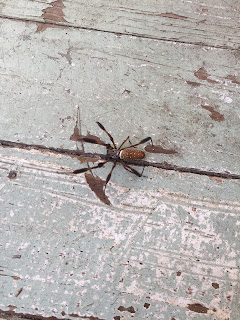 She was fine and I was fine but I'm sure she is quite disconcerted.
One minute she's chillin' in her web and the next thing she knows, she's a mile away from home on a porch floor.
I put her outside in hopes that she'll relocate without too much trauma.

Okay! That's all. It's a beautiful day and I'm about to hang sheets on the line and do about a million other things and I have no complaints.

Also? Mick Jagger, who is 74, is allegedly dating a 23-year old.
Guess he broke up with his ballerina baby-mama.
Of course this could all be laptop gossip but we are talking about Mick Jagger here so who knows?