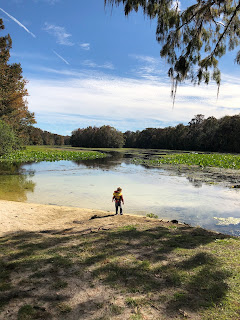 It was chilly, chilly this morning but by the time we got on the river, it was absolutely perfect. There were only a few people at the Wacissa who were also putting in kayaks and canoes. Vergil inflated his kayak and gave August his paddle. 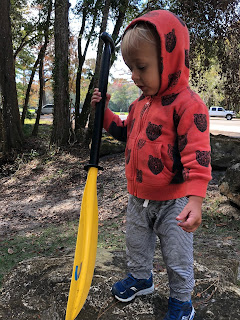 I put August's PFD on him and we got in the kayak and pushed off down the beautiful river. The water was clear as could be, there were so many birds, and the sky was gorgeous with clouds wisping like an old man's beard. 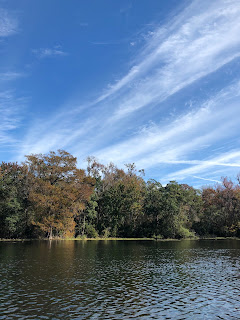 The trees were starting to show color, especially the cypresses. I showed August the cypress knees and said, "Did you know that trees could have knees?" 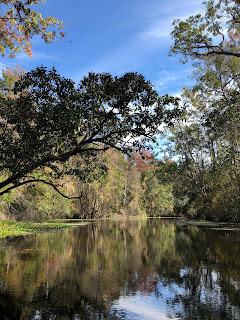 I am not sure if he was suitably impressed.
We saw a tree with nine white ibis in it and we saw a great blue heron. We saw lots and lots of the common gallinule and a couple of woodpeckers, doing their wing scoop flight from tree to tree. We saw small white herons and we saw birds which I am ashamed to say I did not know the name of.
We saw beautiful flowers, too. 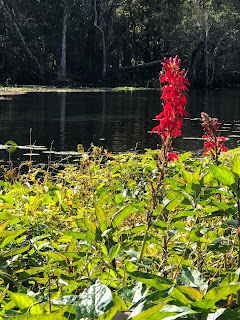 Vergil paddled us down the river a ways and August wanted snacks so we broke those out in the kayak. It was one of those easy, whatever days. 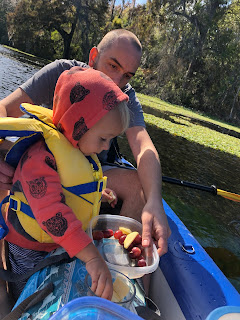 And then we slipped into the little side stream where the Blue Hole is. The Blue Hole is a bottomless depth in the river which, if we had been in Mexico would be called a cenote. The cenotes were sacred to the Maya as passageways to the underworld and the Blue Hole is sacred too. In the summer it can be a raucous place with boats anchored and tied up, people swimming and jumping from rope swings, music bouncing off the trees which form the bowl around the depths of the hole. But today, everything was quiet and at peace and we had the place to ourselves and could feel the holiness there, the wonder, the mystery, perhaps even a limestone passageway to something, at least, that can be felt but not seen. It was beautiful.
We tied up to the little floating dock and that's where we had our picnic which consisted of more snacks. Cheese and crackers and nuts and apples and grapes and tangerines and dark chocolate and of course, chips and salsa and guacamole! 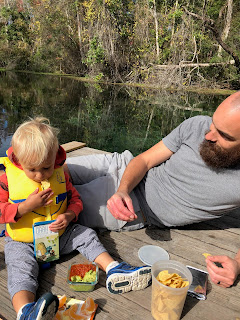 We fed corn chips to the little fish who came to see what we were doing and those they ate but when we tried to give them little bites of grape, they would take them into their mouths and then spit them out. It seemed that each of the fish had to go through this process, not trusting the opinion of his or her brethren. A perfect lunch on a perfect day.

We cleaned up all of our trash and got back in the kayak and headed to the shore. It had been a short but wonderful trip and I was proud of August who was calm and patient although he did ask about one million questions, many of them either, "Auggie doing?" or "That called?"
Vergil is so patient with him, so sweet.
He finally said, "Well, August, it seems like Auggie would know best what Auggie is doing," and so it would seem, but somehow, August needs to hear an objective opinion on the matter quite frequently.

There were several times during our little voyage where we just sat and watched and silently took it all in. I thought about how lucky I was to have grown up on a river, near an ocean, and then a lake, to have had so much water in my life and all of the life that surrounds and inhabits water. That is where I find my church. That is where I am moved to tears, simply to be present and open to it all. I am also so very lucky to have a son-in-law who is so wise in the ways of the outdoors and who respects all that being on the river means.

And then, to make perfection even more perfect, August sang to us on the way home. He sang both his night-night song which is about all of the people who love him and also, Row, row, row your boat, gently down the stream. Merrily, merrily, merrily, merrily...

Life is but a dream.

And some days, that is purely the truth.