Let Us Have Faith 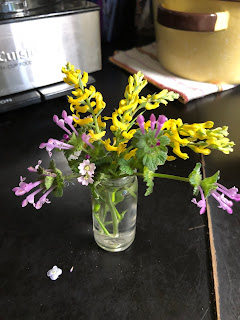 One of my miniature bouquets from what we call weeds in the yard. They charm me, these tiny flowers, these so often overlooked and never noticed small miracles that happen when we do not mow our yard.
I picked those today before I started in on my weeding but after I'd planted the onions and some garlic. I'm probably too late on the garlic but despite the vast amount of it I use in my cooking every day, I haven't been able to keep up with the bag of it I bought at Costco awhile back and it has begun to sprout so why not? Nothing ventured, nothing gained.
I did not get very far in my weeding. It is going to be a horrible summer for me. I simply can't take heat. It was only 80 or a little above today and that is nothing. What has happened to this Florida girl? So I came in and spent quite awhile in the library on the love couch, reading Vanity Fair magazine and just laying there with my eyes shut, drifting in and out of that pleasant place where sleep meets wakefulness, completely content to be there. Finally I got up and went out and weeded out a good strip by the fence to plant some English peas which, believe it or not, I have never planted.
Violet and Darla were inside the garden and Mick was right outside of it, keeping watch. The hens can fly into the garden over the fence but Mick, alas, cannot. Well, I think he probably could. He just doesn't know it. Camellia joined the other girls soon and they nipped at collards which are their favorite and scratched in the hay mulch for juicy bugs. 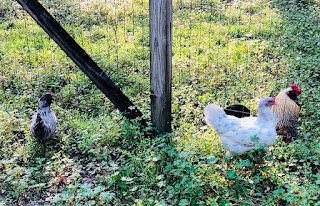 Here are the eggs I got today. Four hens. Four eggs. 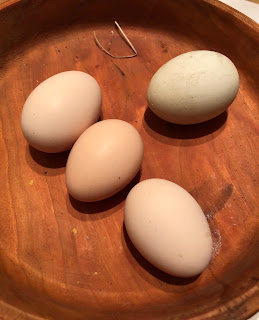 I will plant the peas tomorrow if I can and suddenly, the idea of small and tender green peas delights me more than I can say. It will be an experiment. I always plant sugar snaps which are delicious raw or cooked and the children especially love them.
Before I left the garden to come in, I picked a few of the beets and some carrots and I will cook them this evening for myself with some onions and vinegar and a little bit of sugar and a few of the beet greens. 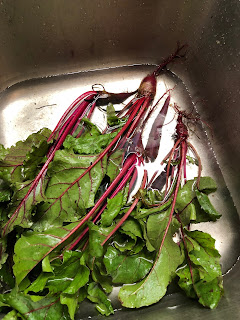 Beets and cooked carrots are two things which my husband does not like but he's at a basketball game and so this will just be for me.
Please remind me to thin my beets and carrots better next year. Please?
I tried but I was not nearly as brutal as I should have been.

All right. Here's a complete change of topic. For the first time since you-know-who got elected, I honestly feel as if his term will absolutely not be completed. The Russian indictments, his handling of the shooting last week, his insane and bizarre tweets- all of it seems to me to be adding up to a shitstorm of massive proportions and I think he will either be forced to resign or will be removed from office. His behavior seems to be becoming more and more erratic and inappropriate. I am not a psychiatrist or a doctor but it appears that he truly is suffering from dementia. Or perhaps, as many have speculated, he never really wanted to be the president, he just wanted to prove that he could be and then, when he did get into the actual office, he had no idea what he was doing or how to do it (this is not speculation) and almost immediately discovered that he was in way over his head and that his usual tactics which didn't even work in the business world certainly did not work in the White House.
Who knew health care could be so complicated?
He does not seem to me to be the sort of man who enjoys learning new things or finding himself in a situation which might require actual work, reading, study, thinking, listening, knowledge of history, or in fact, anything beyond golfing and fucking and building huge tacky towers with his name on them.
And so he's frustrated and he's bored and the tricks he thought he could get away with during the election are proving not to be so clever after all and I seriously doubt he's getting any pussy.
Not from his wife. That's for sure.

The wheels of justice turn slowly but surely they do turn and it would appear to me that they have gained some traction with which to turn and Robert Mueller looks like a bulldog to me.

And god BLESS those kids from Parkland. Are they not magnificent? They are taking their anger and their grief and they are using them to call out the NRA and the people who have been paid off by them who make our laws. They are not going to let the bullshit lay where it is.
You know what? I think that the NRA may actually go down as well. Not entirely, perhaps, but I swear that a tide is surging of people standing up against it and saying, "No more."

So. I feel optimistic about those things. Or at least, a little bit less in despair.