At The End Of The Day

Oh, y'all. I am so far behind in answering comments and email, too, and please bear with me.
I don't know why but it seems like I've been incredibly busy lately.
I took my walk this morning and as I walked, I thought about how exercising outside by walking or running or biking is so different than being in a gym or a class. It's a journey, as well as exercise, although of course working out in a gym or doing yoga or whatever can certainly be a journey as well, although a completely different kind.

I am, as I have said, pushing my distance and my ability and am trying to incorporate new routes and so I have. Some parts of them I am not so very fond of because they are in full sun and on a highway that gets a lot of traffic for these parts and then I have to walk in the grass and weeds beside the road but it's okay. I can go down little roads that lead off of it and except for the dogs in country yards  who rush their fences, sending great glouts of adrenalin rushing through my body, they are pleasant places to walk.

So much is blooming right now. Here's a veritable explosion of what I think is wild plum blossom. 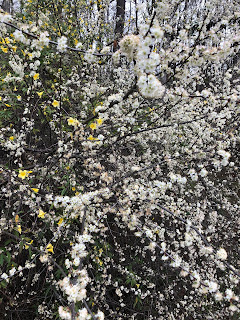 With a little yellow Jessamine thrown in for good measure.

I walked down one road that I used to walk down when I first moved to Lloyd. There's a fairly old graveyard off of that road and it's good for wandering. 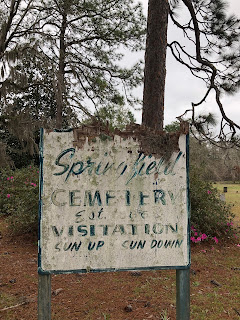 There were many, many fake flowers in evidence today. I do not know why. I probably should. 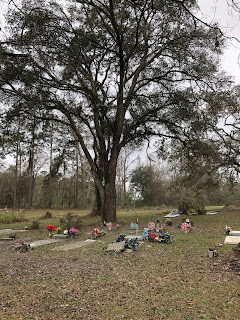 And then I walked on up another dirt road and in the woods, just a little ways from where I was walking I saw one of the things I love the most which is the blooming wild azalea. 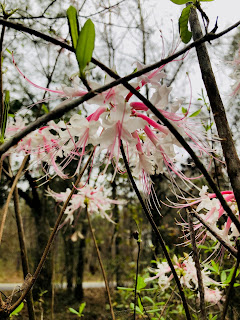 I made my way carefully through last year's fallen dog fennel and some brambles to get close so that I could take a picture. I don't know why but there's just something so fucking miraculous and wonderful about a flower that looks like that which grows all on its own, unnoticed by almost everyone, looking no more special than anything in the world until...those fairy blossoms appear. A sort of magic and yes, if a tree flowers in the forest and there is no one there to see it, it is still magnificent.
I feel blessed to have seen it.

I walked on and on and noticed that the red clover is starting to bloom by the highway and I also found these tiny little violets of a variety which, again, I do not know. 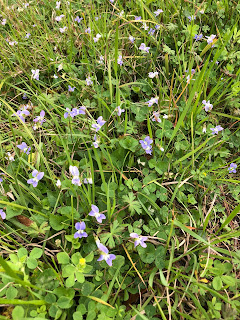 Never in a million years could anyone see them from a car or a truck driving seventy miles and hour down that highway.
But I saw them.
And they made me smile.

After I got home and ate my lunch and did some chores and took a shower I went to town with a list a mile long and by the time I got home it was six o'clock and I had a tiny breakdown, thinking of unloading the car and putting everything away and doing more laundry and unloading the dishwasher and starting supper and giving Mr. Moon his shot and picking a few collards and mustards for the supper and, and, and...

I got over it.

I heard an interview with Joan Baez on NPR on my way home and it sort of blew my mind, especially the part where she talked about one of the songs she's doing on her new album which is a song called The President Sang Amazing Grace by Zoe Mulford and she said the first time she ever heard the song she had to pull off the road because she was crying so hard and just the first few lines of the song they played on the radio and knowing what it was about made me take in great jagged breaths and release huge tears and there's a video of Ms. Mulford singing it and I can't even watch it yet.
To think that we came so quickly from a president who could move our souls with his compassion and his honest face and voice to the one we have now is so devastating. I don't even need to talk about it.
But here's something Joan said in the interview:

"I have such a low regard of how the human race has behaved — you know, for the last few centuries, at least — that I don't expect much. ... In light of what we're experiencing in this decade, which is something that none of us could have dreamed of during the worst, darkest periods of the work that we did in the '60s and '70s or '80s or '90s — we couldn't have written this scenario. So in the face of what looks like really bleak defeat, we have to do the little victories. And you have to consider every step that's a positive step that brings back compassion, that brings back empathy, that brings back political action. Day by day, these are the victories. At the end of the day, you get only what you did that day. You don't get a whole future of world peace."

For some reason, that made me feel a little better.
We have to do the small victories.

I was in Bed, Bath, and Beyond today and when I got up to the cash register I was kicking myself for not having one of the many coupons one gets in the mail from them and the woman in front of me said, "Do you have one of these?" and she showed me one of those coupons and I said I did not and she said, "Here, take this one. I have more than I need."
And that small action cheered me so much and I thanked her profusely and she really did save me some money because I was buying some nice sheets and when I think about all of the small and yet lovely things I've seen today, I feel better still.

And there is still much to do before I sleep.