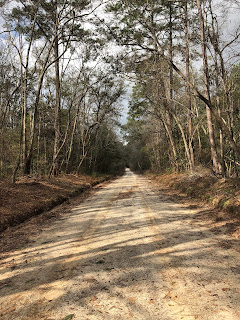 Woke up this morning from a dream of being pregnant at my own age which is 63 and although I wasn't particularly worried about the birth, I was aware of the fact that I probably would not get to see the kid graduate from high school. As the time for the birth to occur approached, I called Lily and Jessie's midwife to ask her to help me when the baby came. I was going to tell her that I'd just pay her under the table and we'd keep it on the DL because obviously a 63-year old mother was out of her protocol. But she didn't answer her phone and that's about the time I woke up.
And then for some reason I just keep being weepy and sad but I hitched up my panties and put on my shoes and went out and walked for over an hour and came home beet red and still sad.

Mr. Moon was home because it was a bank holiday and he spent all day long working most industriously on the two bathrooms while all I managed to do was to go to Publix and a few other tiny things around here but I did get the peas planted that I wanted to get in and now the water is on in the garden and that always makes me feel good.

So there's not a whole lot going on in my life with is just fine and dandy although I have to tell you that I am thinking of Cozumel almost constantly. Perhaps this will be a Christmas-in-Cozumel year and I hope so with all of my heart because I need to get back there. I need to get in that water and I need to watch that sunset over the Yucatan and I need to be with a lot of Mayans and I need to see iguanas and I need to eat that delicious, amazing food, and I need to get away from this life and be in that one again.
I don't just want it. I need it. 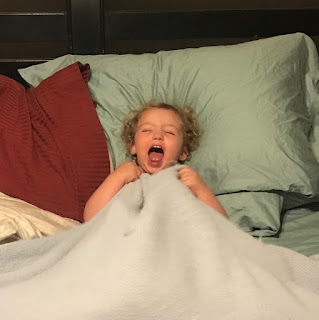 Lily sent it last night and she says that she got this picture right after Maggie proclaimed, "MY BED!"
Who would challenge her?
Not me.
I think I am going to accompany her and her mama to a well-baby check-up tomorrow. You know how I love those things. I hope the doctor's office is ready for the force of nature we know as Magnolia June.

I would like to say that I am so proud of the Leon County school system which is going to allow excused absences tomorrow for students to join their fellow students from Marjory Stoneman Douglas High School who are coming up for a rally in Tallahassee tomorrow. You can read what the local newspaper says about it here.

I can't help but feel that Marjory herself would be so proud and supportive of these kids who, quite possibly, might just actually change things- something she herself was damn good at. If you don't know anything about this amazing woman, check this out.

I sniff the wind. It smells of good dirt and of tea olive, of stinking horn mushroom and the smell of the sweet organic decay of last year's leaves, now dropped to the ground, feeding the new growth of wood and bud and leaf which I can also smell. It smells of change.
It smells of bitter rage and grief becoming alchemized into power and righteousness and strength. It smells of hope.

Let's all pay attention. Let's all remember that although we may not live long enough to see the maturation of our dreams and hope, we can still give birth to that which is ready to be born. We can still plant those things which will live so far beyond us. We can feel safe in the knowledge that those coming behind us will nurture and sustain that which is right and is good and which we have believed in for so long and have worked to make real. Just as we did for those we came behind. And they will add their own unique and amazing and splendid abilities to shatter and rebuild what some of us may have become complacent about.