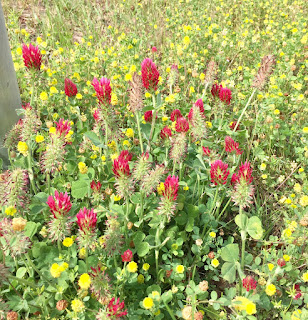 So whatever you want to call it, it's pulling me down and over and through. Sometimes anxiety is described as a sense that something horrible is about to happen any/every moment.
THE SKY IS FALLING! THE SKY IS FALLING!
But sometimes, it seems to me, that anxiety feels more like something completely elemental and necessary is missing. Or about to go missing.
Something so important that it may be glue of sanity, of life itself.
I don't know.
I do not know shit.

But this morning I thought about what I could do to try and feel better and I decided to cut some greens and take them down to Ms. Liola because I hadn't seen her in forever and I knew she must be worried and besides that, I feel so guilty because I haven't been back to see her since I tried to help her get an AC last year and realized that if you plugged an AC unit in that trailer, the whole thing would
(a) collapse, and
(b) burn down.

So I cut mostly collards and some mustards and kale and wrapped them up and tied them with string like a green bundled baby and walked down to her place. I saw the Sheik, out in the yard and called to him and he said, "Where you been? We all been worried about you."
"I'm fine, I'm fine," I said. "Is Liola home?"
"She's home," he said and went to the trailer and called out at the door, "Lee! Someone here wanting to see you."
And she came to the door and oh god, y'all. She was SO happy to see me. I can't even tell you.
Which made me feel worse than I had before.
We talked and caught up and she laughed, remembering the time I brought Owen and Gibson to visit her. I don't think she'll ever forget that. I asked about her grands in Texas and she said they might come visit in June and her son's trying to help her figure out how to get a new trailer or something. Move her to Texas maybe.
I would hate to see her move but someone has to help this woman. I don't know how in hell she could last another summer in that falling apart metal box.
Then we got to talking about the election and I told her that I hadn't been right since that day and she said she felt the same. We began to talk about the things going on, the scary, horrible things, and I cried and she felt so bad for me and kept saying, "I know! I know! I feel the same way. But you're going to be okay!"
"I want everyone to be okay!" I said. "Everyone!"
Which I know is completely ridiculous but I do and then she kept telling me that if I ever needed anything, to call on her which shamed me so bad because I have everything in this world I need and she doesn't even have floors she can walk on in certain places.
Fuck. What a world.
And of course all of that made me cry even more and I'm crying now and does it seem sometimes as if all I do is cry?
She finally came down from her steps and put her arms around me and said, "I got to get me a hug now," and I said, "Don't let me breathe on you. I've been sick."
And she said, "That's all right."
And what a hug it was.

And then I went on and walked a short and fairly slow walk. The fally-down house is getting closer to gravity every day. 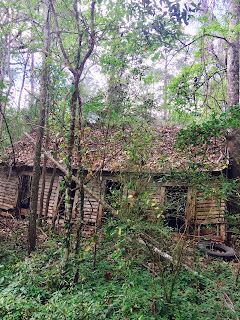 I wanted to take a picture of the end on the right side where the only thing holding it up seems to be a tree which has grown up there but it's surrounded by poison ivy and I wasn't risking that.

So. That was every bit of anything worth doing that I did today. I feel like I'm going to come out of my skin and I feel such despair at the thought of everything. That man, that horrible, horrible man, is determined to kill us all with his deregulations on the environment and we're just sitting here letting him and the drug industry is doing everything it can to addict people to its products and deny us the right to cannabis and people like Ms. Liola are in dire straits already with the tiny pittance that Social Security and Medicare may provide and are in danger of losing even that while The Braggadocio in Chief swells and swells with pride and gluttony and vows to stuff even more money down the glutted craw of the military and build a wall to keep out his perceived enemies, the very people upon whose backs his fortunes have been made in many instances, and you don't need me to tell you.
You know.
We all know. Even the ones who hold their hands out to steady him as he totters off to his golden toilet in his golden palace, who bow their heads at his passing and pat his back with feigned affection and we all know, we all know, that no one in this world has any real affection for him at all but are only there because the winds of fortune and power seem to be blowing that way although it would seem to me that it is apparent to even those toadies that this is an ephemeral wind indeed and in the end, history will report that all of the King's horses and all of the King's men could not even begin to put that man back together again once he has fallen from that golden throne.

I am getting a few more chicks tomorrow. I think I will get to see August. Maybe Jessie and I will walk down to show him off to Ms. Liola who, when she met him last year, was charmed by his baby ways.
I am not going to lose hope. Not for any of us. I am going to remember how, upon parting, I took Liola's hand and we patted each other as softly as a mother pats her baby's bottom.
I am going to try and be the person Liola says I am which is a loving and caring person. I am going to try and use whatever anxiety and depression I have to make me a more empathetic and aware person. If I must suffer it, then goddam it, I want to reap some benefit.

Believe. Breathe. Don't give up and don't forget to look for beauty, to hold out your hand to another, to absolutely not give up.