What A World We Live In 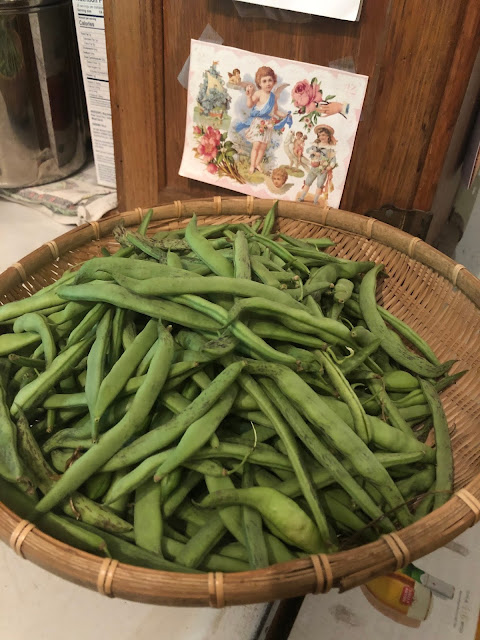 Before we went to our respective sleeping places last night, Mr. Moon told me that he was going to go out and disc with the tractor this morning and would probably be gone before I got up. He asked me to please text him and let him know that I was okay which I thought was sweet.

I was SO tired last night. I guess that tiny little walk did me in. I stayed awake long enough to finish the short book about Walter Anderson but I was asleep as soon as I turned out the light. I woke up once about two-thirty, went back to sleep, woke again about seven-thirty when I heard Mr. Moon stirring his coffee and the next thing I knew, the landline was ringing and it was ten-thirty in the morning and I had been sound asleep.

"Good Lord!" he said when I answered. "I didn't know where you were." He'd texted me and tried to call my cell phone but I turn the ringer off when I go to sleep and so I never heard a thing.

"Well, I told you I was tired," I said. Here's the funny thing- I didn't feel guilty at all. Usually it's me sending him texts that say things like, "WHERE ARE YOU? ARE YOU OKAY? I'M WORRIED." And him answering me finally saying, "I'm fine. Don't worry so much."

He asked me to keep an eye out for little Dearie because she didn't seem to be there this morning when he opened the coop. Which did not bode well. When I put them up last night, I didn't see her but her mother had her wings spread and I just assumed that Dearie was underneath them and it turns out she was. But in the night something got in and killed the little chick and now she's gone. We found her little body, pretty torn up in the small coop where she slept with her mother. This is very, very sad. Dottie seems unharmed and I'm not at all sure what happened. Usually a hen will fight to the death to protect her baby and maybe she tried but whatever happened, happened. And Dottie seems amazingly fine with this. Her tail feathers are still spread the way a broody and mama hen's feathers are but she's not calling for Dearie and I am glad of that.

Yesterday I threw out the two eggs underneath Darla. It was once again time. And today she's finally off the nest and traveling about with Dottie, her sister.

And that is the biggest news from us today. I picked green beans which was rather torturous in that it was hot as hell and the yellow flies attacked my ankles but as you can see from the picture above I am still getting a good amount of beans. And they are still delicious.

I have not had any Ibuprofen today. First time since I fell that I haven't had to take any during the daytime. I was stiff and sore when I woke up this morning but walking around and doing stuff unkinked me and I didn't feel the need for pain relief. This is pretty huge.

So. The book about Walter Anderson by his wife. Well, I can't imagine a better description of loving someone with bi-polar disease. I don't know if he was ever actually diagnosed with that particular ailment because he died before much was understood about it. But from what I read, it was quite obvious that he had all the hallmarks. His wife, Sissy Anderson, loved him and stood by him from the time of their marriage until his death and I really do not understand how. Or even why, to be more specific. He threatened to kill both her and their children at various times. He was in and out of facilities for the treatment of mental illness quite a few times and always escaped. He would disappear for weeks at a time. He would come home, impregnate her and then leave again, claiming that he could not paint or make his art with a family. And throughout all of this she accepted him back whenever he showed up (often at night, leaving before daybreak), supported him in his art, loved him for who he was, raised their four children, worked as a school teacher, took care of her father and then, eventually his mother, and she nurtured and tended her husband as much as he would let her.

He sounds like a fascinating man in many regards but I really do not know how she did it. The man beat up his beloved mother when she was practically on her death bed. This precipitated another stay in a hospital for him as did almost all of his violent actions against the people who loved him. I was left feeling extreme sorrow for his wife who never gave up on him, believing that his genius explained away so much of his violence, his abandonments, his completely irrational behavior. And of course I feel great sorrow for him because his suffering was endless.

I'm looking forward to reading the more traditional biography of him that I have. Anderson's artistic output was phenomenal in various media and it would appear that he is still being written about, celebrated and recognized. His sense of oneness with nature was as deep and real as anyone's I can imagine and he spent vast amounts of time painting and drawing in complete isolation on nearby barrier islands which remind me of Dog Island although they were in Mississippi. Do a google search for his art if you'd like. 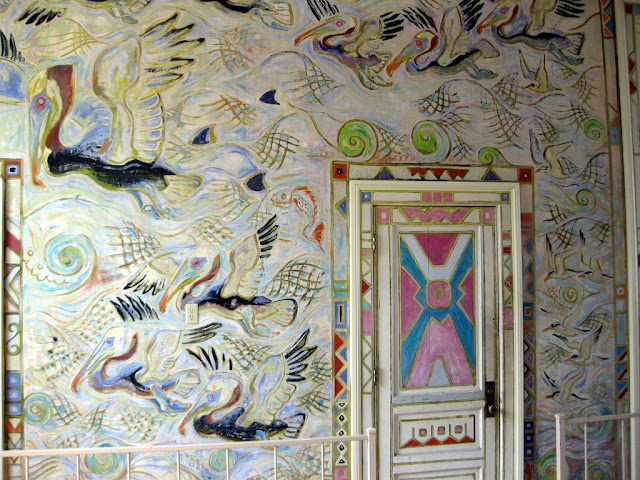 From the walls of his house.
And so it goes. Another day gone by. I have field peas and rice and pork loin on the stove. A loaf of bread is out of the oven. It is an unattractive loaf, flattish and brown and rough. It will be good with butter on it though. I need to make a salad.
I am thinking about all of the different ways there are to be a human on this earth. All of the different ways to love and to live one's life. And all of the ways there are to appreciate the unique and wonderful and horrible differences.
I'm going to go pick some basil.
Love...Ms. Moon