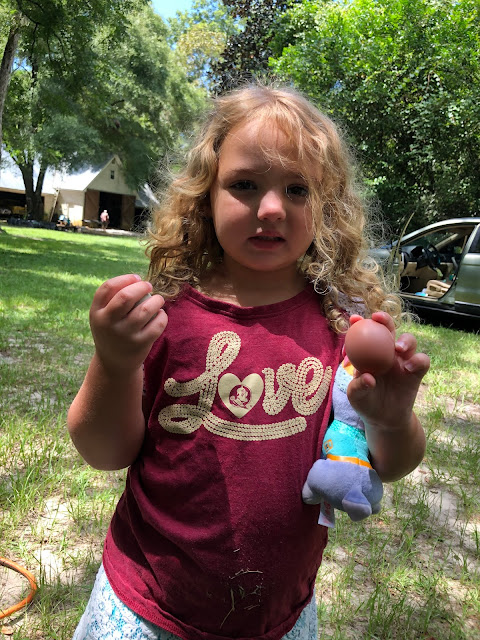 We got visitors today! When I woke up Vergil had already texted saying that the boys wanted to come see Mer and Bop and would that be okay? Jessie was at work and so the guys were at loose ends. We said we'd love to have them visit and so out they came but before they got here, Lily texted and also asked if we were up for visitors.

Of course! Bring on them babies!

Vergil and August and Levon got here first and Boppy got out the metal detector and Levon hauled the garden cart over, filled with shovels and trowels and the detecting commenced. 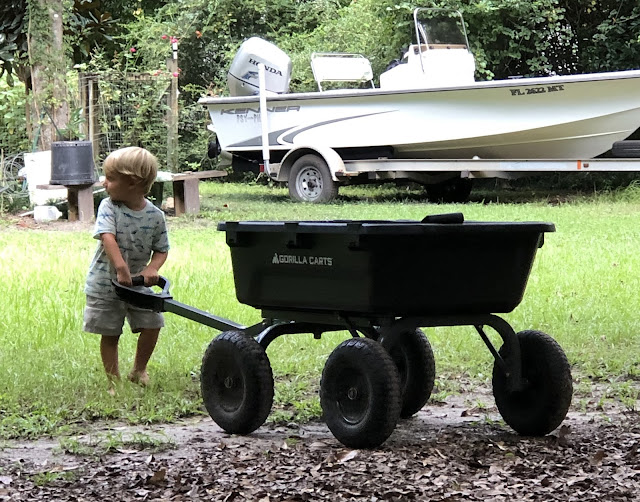 The lads found some railroad spikes and a few huge nails and a giant bolt and one of those things that's round and flat with a hole in it. A washer? 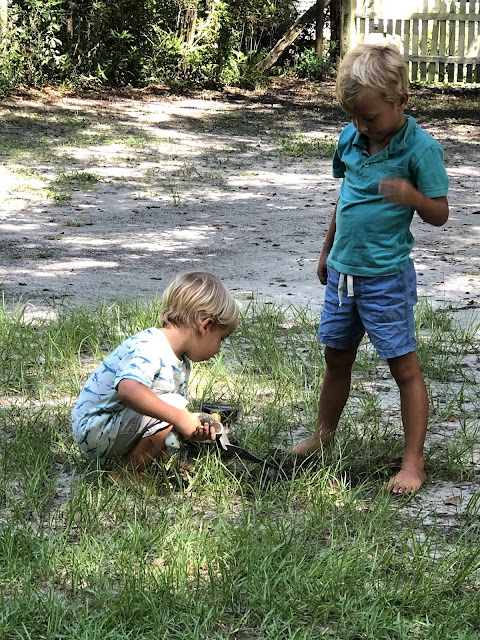 Sometimes I wonder if there isn't an entire wagon or something buried under there. It was fun. Mr. Moon and I got out some chairs and sat our old butts in them to watch the guys and I had a fancy fan from the Dollar Tree to cool myself with and I told Glen that now we really were a Mee-Maw and a Paw-Paw, sitting in the shade, watching our grandchildren play.

When Lily got here, Maggie tumbled out of the van and ran to go check eggs. I had deliberately not collected them this morning so that she could find them because she loves that so. She found a green one and a brown one and handed them over to me. Then she came in the house and got the baby stroller and proceeded to go off on her play-pretend adventure with one of the babies who lives here and her stuffed animal which I think was a puppy but I'm not sure. Owen and Gibson helped with the digging some but it was hot and buggy and soon we spread out a sheet and a throw and Mr. Moon brought out some fans with extension cords and I passed out more Dollar Tree fans. A picnic was enjoyed by all of us. We shared grapes and a watermelon that Boppy had cut up two days ago. 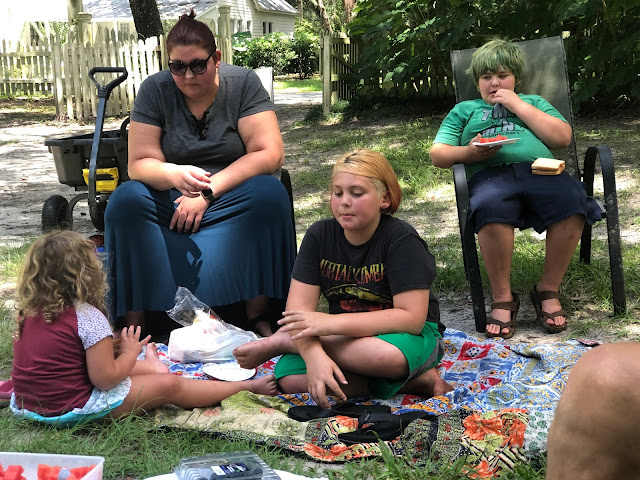 As you can see, Owen's hair is now a sort of gold with pink highlights and Gibson is sporting green merman hair. A global pandemic is no excuse to forgo style and self-expression.

Before everyone left I asked if it would be okay for me to read "The Little Red Hen Makes A Pizza" and they all said that would be fine so I found the book that I've read so many times and read it to them, holding it up so that they could see the pictures they know so well. They took turns being the voices of the duck, the dog, and the cat and when I was done, I thanked them for letting me do that and August said, "And we enjoyed it too!" which I thought was just incredibly polite.

After they all got into their cars and we said, "I love you!" and gave many air hugs and yes, I kissed a few toes, they pulled away and left us here in Lloyd where it was quiet again.

But then I got a text from Rachel asking if they could come out for a little visit and they did and that was nice too. Rachel brought us a chicken eggplant parmesan to bake and I gave them some green beans and eggs.

And that was my full day. Mr. Moon is back in the woods doing something else with his tractor involving a "coil". I swear, I think he's having as much fun figuring this old tractor out as he could possibly be having. I don't know how he sleeps for figuring things out in his head when the light goes out at night. Every morning he has new insights.

Instead of baking Rachel's casserole, I, like the Little Red Hen, am making a pizza tonight and will save the no-doubt delicious parm for a night when I want a break. I've cut up vegetables and sausage and olives. Everything is ready to go. The crust I'm making is going to be thin, the way my husband likes it, or at least it will be theoretically, which means that I do not give it a rising time, but just make it, let it rest for a moment, and then stretch that baby out, top it, and bake it.

I have not sat in the chair for one second today and I have not watched one episode of The Office. I did take Ibuprofen this morning and I have been comfortable all day long and I haven't done anything very physical either but I can hardly imagine a better day, given the circumstances.

Life goes on, we adapt, we change, we accept or at least the best we can.