Not At My Best 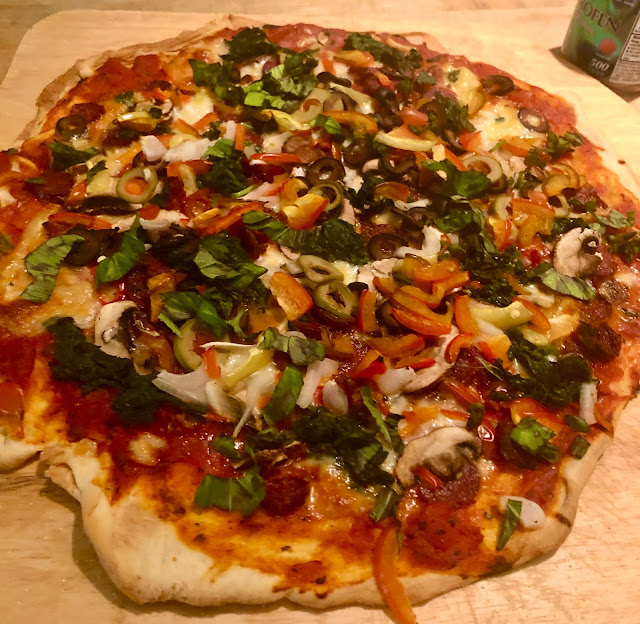 Last night's pizza turned out wonderfully well. I was proud of it and only wished that I had some arugula to chop and put on top of it when it was done but the bugs have taken over what small amounts of arugula I have growing and that is just the way it is. The fresh basil had to do.
I'm posting a picture of the pizza because if I posted a picture of what today has been like it would mostly look like this. 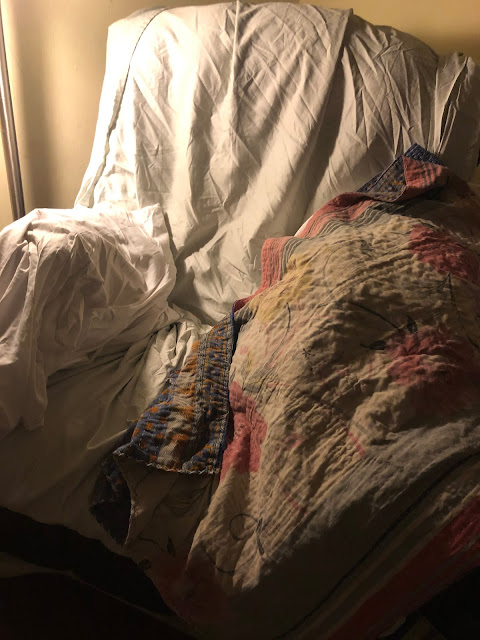 My ribs have decided that they wanted to hurt again today and I have had no energy and so I've been in that chair a good part of today, watching The Office and feeling useless again. I managed two loads of laundry and this afternoon I did make my husband a peach cobbler because I have been promising him I would and he even bought vanilla ice cream in preparation. 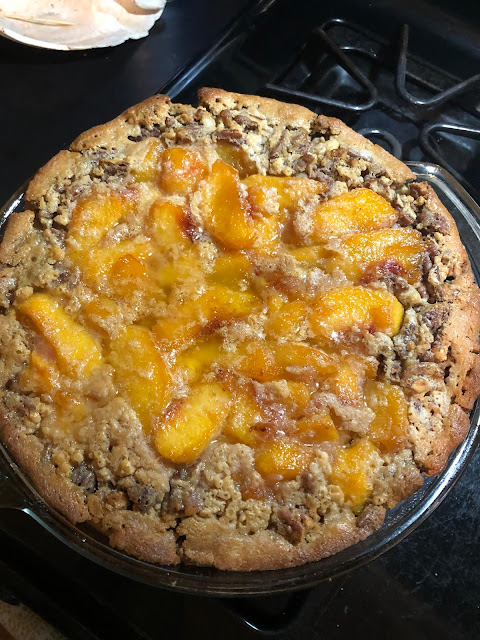 Those Costco peaches have turned out to be a very fine thing, providing us with plenty of the fresh fruit and also this cobbler. It's the recipe that has been passed down for generations in southern kitchens and is sort of a sin. It's basically the recipe that Truvie gives in Steel Magnolias wherein she finishes it off by saying, "And I always put ice cream on top to cut the sweet."
Thus, the ice cream. I did use some brown sugar and also pecans which are not traditional but Joanne inspired me with her peach praline crostata today. This is basically a cake wherein you melt the butter in the baking dish, mix up self-rising flour, milk, and sugar, pour that over the butter without mixing it, then spoon the peaches cooked in sugar and water over the top. When it bakes it somehow comes together in a magical alchemy of cake and fruit. It's good with berries mixed in with the peaches, too.

It rained this afternoon and is raining still. A good, hard downpour with thunder and lightening, turning into a sweet, slow drizzle. Mr. Moon was twenty miles away doing tractor stuff and said that it barely sprinkled there. I am starting to wonder if coming-rain affects my pain level. I suppose it very well could.
So many mysteries.
While it was raining hard I turned off the TV and took off my glasses and dozed on and off for awhile. I seem to sleep so much. I think that's probably good. When I'm sleeping I'm not doing anything to fuck up my ribs like bending way over and reaching into the pot cabinet.
Sigh.
One would think I'd have figured a few things out by this point.

So. Joe Biden has picked Kamala Harris to be his running mate. I'm seeing lots of complaints on FaceBook about how she's not progressive enough and of course, Biden isn't progressive enough, and I really just do not understand this. At this point, anyone who isn't Donald Trump or Mike Pence is fine with me. Is there a perfect candidate?
Hell no.
We're not getting married here, people. We're choosing two people to replace the least qualified president in this nation's history and his psycho sidekick. A president who can't open his mouth without lying, who is a Grade A sociopathic narcissist, who will do anything within his power to get reelected including letting the Russians get away with murder (literally), who is a racist, who has no respect for woman and judges them solely on their looks, who appears to be homophobic, transphobic, and every-other-type of phobic a human can be, who has never worked a real day in his life, who has cheated at every enterprise he's ever been involved in, who doesn't give a flying fuck about the environment or the disabled or, well, have any type of human decency. On top of that the man is bragging because he passed a test given to people with suspected dementia. And of course has managed to allow over 160,000 people to die of Covid. And there is so much more. So. Much. More.
So Biden and Harris aren't progressive enough?
Do I care?
Fuck no. I love them both to pieces.

But that's just me.