The Keyboard Is An Amazing Invention 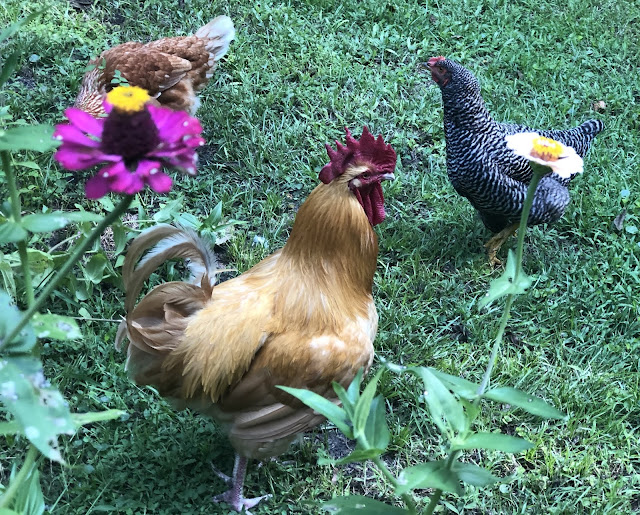 Well, there you have Liberace, Alice and Eggy Tina. I think. The colors are a little weird but that's what the iPhone saw and who am I to argue? Now the cool thing about this picture is that...IT'S HERE!
And so is my new, real-true MacBook.
Oh, guys! I love it so much! Typing with all my fingers is awesome!
Poor Mr. Moon. He had to go into town once again, this time to pick up this gorgeous machine and mail the smaller MacBook back to Apple which took far more time and trouble than was reasonably expected. But now it is done and that is that. And here we are.
I've spent a good amount of time this afternoon exploring this gorgeous piece of space-age-and-beyond technology and of course I have not touched the tiniest tip of of its capabilities and thankfully, there is enough that is familiar to me to be able to maneuver about where I need to go. The guys at the Computer Doctor Repair place transferred all of my files and due to the fact that every bit of us is now known to all of the gods of the internet, all I had to do for a great deal of the setting-up was to type in my google username and password and there I was. There's even a photo app which syncs up with the photos on my phone so I no longer have to mail those photos to myself and then transfer them to the desktop in order to use them on my blog but can simply access them right here as I write. 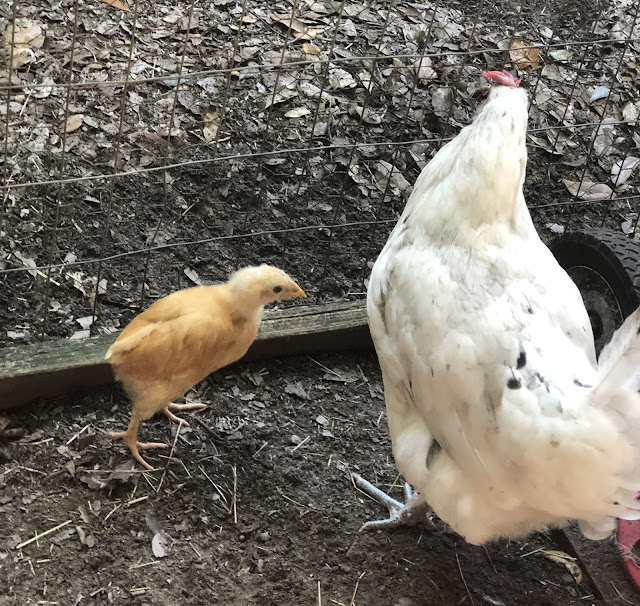 I know you've been dying to see what little Dearie is looking like these days. (Deep sarcasm.)
There she is. Or he. Dearie will probably turn out to be a rooster if the past is any indication. But she/he and Dottie are still a very bonded pair and are not separated by more than a few feet all day long. I am sure, however, that some very subtle training is going on by Ms. Dottie to teach the bebe to be a tiny bit more independent.
And this is, as every mother knows, a process. Dearie is nowhere near ready yet to be separated from Mama and unless something snatches one of them, she won't be for awhile. 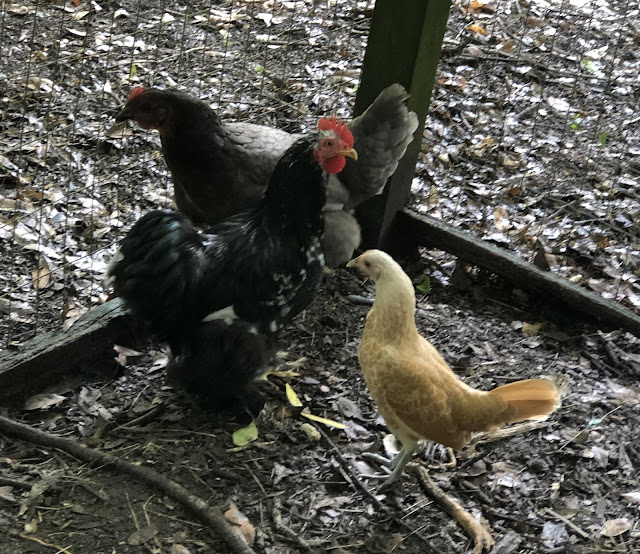 Here are Tweety Bird, Fancy Pants, and Eggy Nancy. (I think.) I wanted to get a picture of Tweety that showed the smallness of her little body compared to a regular sized chicken but this picture doesn't really do that. Still- there they are. Look at the iridescence of Mr. Fancy's tail feathers.
I suppose that's all the pictures of chickens we need today.
I was quite teary this morning. I woke up late, startled to find that it was close to ten. There was about an hour that I was awake last night. Maurice had something to do with that. She has been going out before bedtime to hunt, I suppose, during this full moon time and when she returned last night she started scratching an old upholstered rocking chair which makes an incredibly loud noise. When she finished up with that, her claws renewed to razor-sharpness, I am sure, she settled above me on The Chair's back and proceeded to attend to her toilette with great enthusiasm, causing the chair to shake.
"Stop that!" I finally said and reached above me to get her down off that perch.
Eventually, I got back to sleep.
But when I got up, I just felt sore and weary. Not weary like I needed more sleep but weary like I suppose one feels when one broke four ribs two weeks prior. Having never broken so much as one rib before this, I have nothing to base my recovery time on except for what Dr. Z said about 4-7 days for the real pain and then six weeks for real healing. I have honestly wanted to hear other people's stories about their own experiences with broken ribs. It does help.
So anyway, I just went with the weariness and the teariness and after I did a few tiny things I crawled back into my nest and watched more of The Office and ate a lunch and tried to do the crossword and I am sucking at the crossword these days. What used to take me eighteen minutes now takes me hours and if this is another side-effect of breaking ribs I don't like it. I just don't have the energy to think.
But then Mr. Moon came home with the MacBook and with mail, some of which was for me and which made me happy and I made his lunch and opened up the MacBook and I felt better and haven't cried since.
No mystery there.
I did not mention yesterday that Lily and Jason and Lauren and Owen and Gibson and Magnolia all went to a relatively nearby river to go tubing and they had a wonderful time. There's also a spring head and Lauren took this picture there. 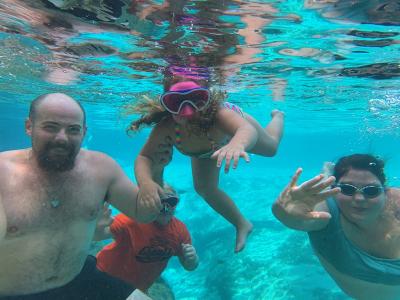 It sounded and looked as if they all had the most wonderful time. They stopped by on their way home and I got to hear all about it, including the giant snake that Owen almost ran up against. It was so good to see them.
Well, it's time for me to go heat up last night's soup which was good enough to repeat. I managed to pick another huge bowl of green beans this afternoon and I found three beautiful eggs in the pump house nest. Here are the eggs I've collected lately.

Eggy Tina's is on top. Isn't it a darling beauty?
Was that enough pictures? I'll try to get some shots of something besides chickens and eggs tomorrow.
Love...Ms. Moon
Posted by Ms. Moon at 6:50 PM