I've felt all bitter today. Maybe that's the emotion I'm feeling. Bitter. Or maybe angry or maybe just really annoyed and I'm not sure who at but it might just be me.
My hips hurt. This is what happens when I walk. Fuck it. I'm still going to walk. This morning on my walk I saw the things I usually see. One of these is a wig. Like some gal got her hair snatched off and the hair got thrown out the window. Bitch! Boom! I can never walk by that without wondering. Also a bag of that yellow stuff they use to make the markings in the road. It fell of a truck, I guess. Now it just lays there on the side of the road quite close to the wig, as a matter of fact. By the way, that wig has a LOT of hair in it. Long, too.
This morning I also saw a new road kill. No, I'm not saying this is exciting. I'm just reporting. Armadillo.
Why did the armadillo cross the road? Because he was depressed.
Why did the chicken cross the road? To show the armadillo that it can be done.
This armadillo was not only hit, it was smashed flat. It's shell was about two feet away from its body. Again- BOOM! Now I'll get to watch the process of decomposition. This is a process I am pretty familiar with by now. I try to just avert my eyes but I can't help but glance at things. You know?

I went to the Costco. I had lost my card. They gave me a new one. They weren't annoying at all.
I went to the library and they weren't annoying either. In fact, very sweet.
I went to Publix and got to hug Lily and bought Maurice a cat toy which she has no interest in playing with. That's not all I got but that's one thing I got. None of that was annoying except the part about Maurice not wanting to play with her toy mouse stuffed with catnip.

Then I came home and a woman I know and her darling son came by. The son, who is like eleven years old, is a chef. I'm not kidding you. That child makes foods I don't even know what they are. He is making rabbit confit this weekend. As well as two other types of rabbit preparation. Anyway, his mama, my friend, posts pictures of his amazing culinary creations on the Facebook and I noted that he does things with quail eggs so I asked the mama if he would like to try some duck-egg cookery. She said that he very much would! So they came out today and I gave Chef Will a dozen duck eggs and some chicken eggs too. Also, a few greens from the garden. I can't wait to see what he does with these things. Some children just make you believe in reincarnation because how in the hell does an eleven year old child know how to cook these things? Oh sure, anyone can watch cooking shows on TV and anyone who can read can follow a recipe but I know damn well that if you don't have some sort of inner knowledge of cooking, it just won't happen they way Chef Will makes it happen.
So none of that was annoying. In fact it was terrific! Here are some pictures that Lisa sent that she took while she was here. 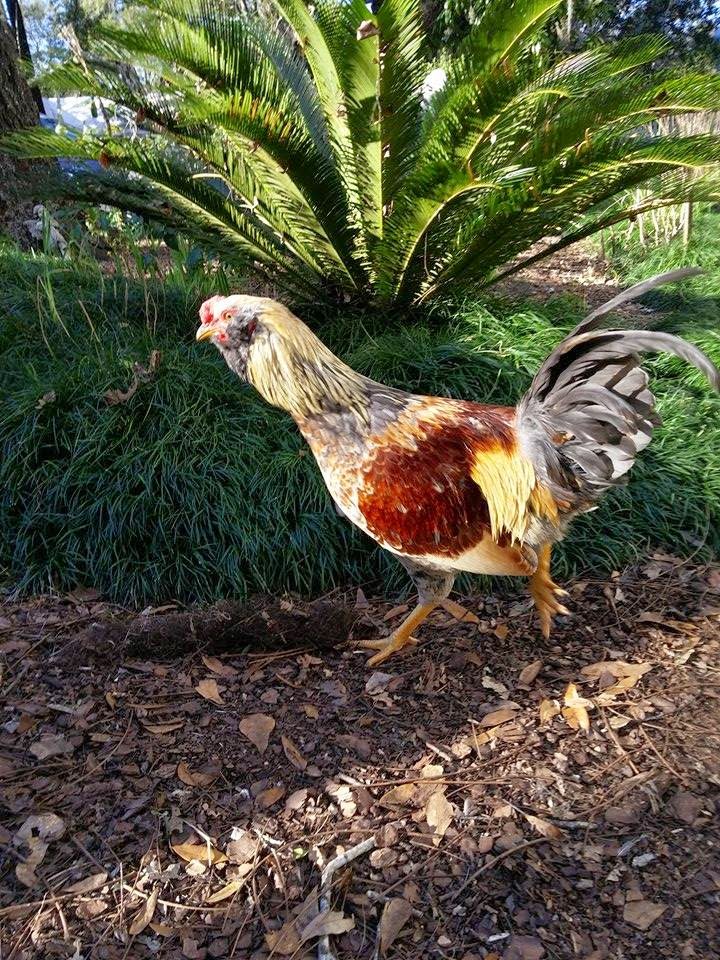 Best picture of Mick that's been taken. You can truly see his loveliness. 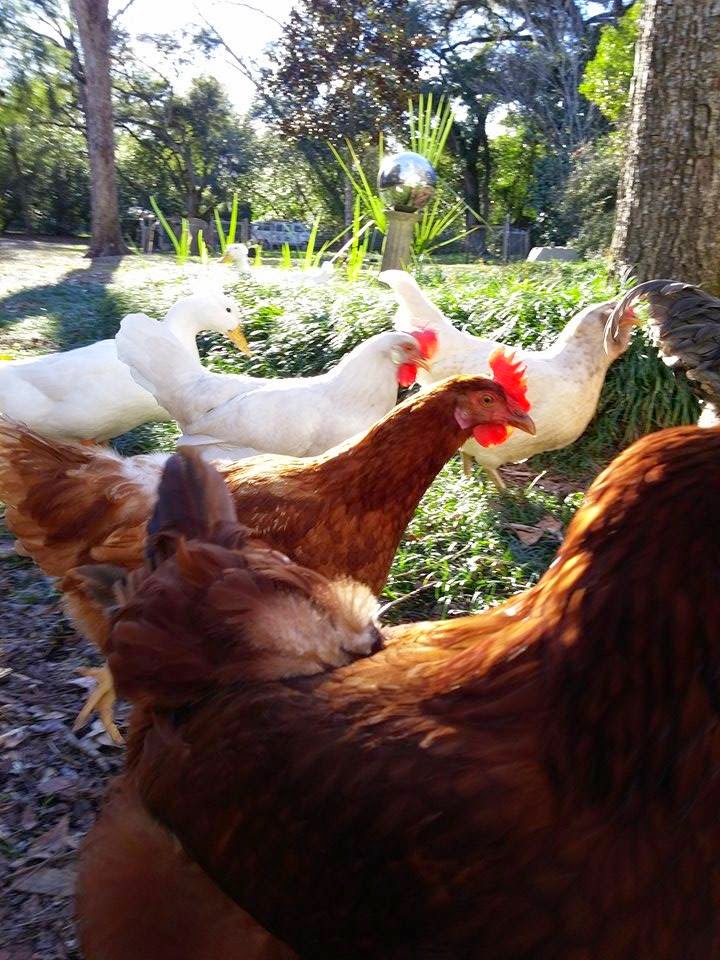 Part of the flock. 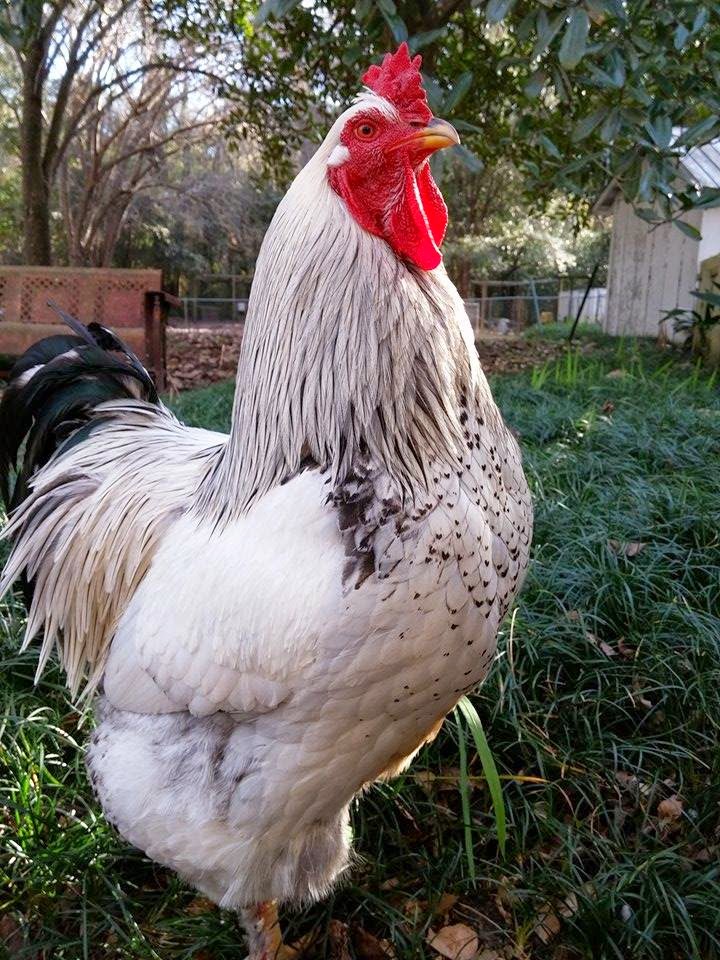 And of course, the ever-photogenic Elvis.

But here's the best one. 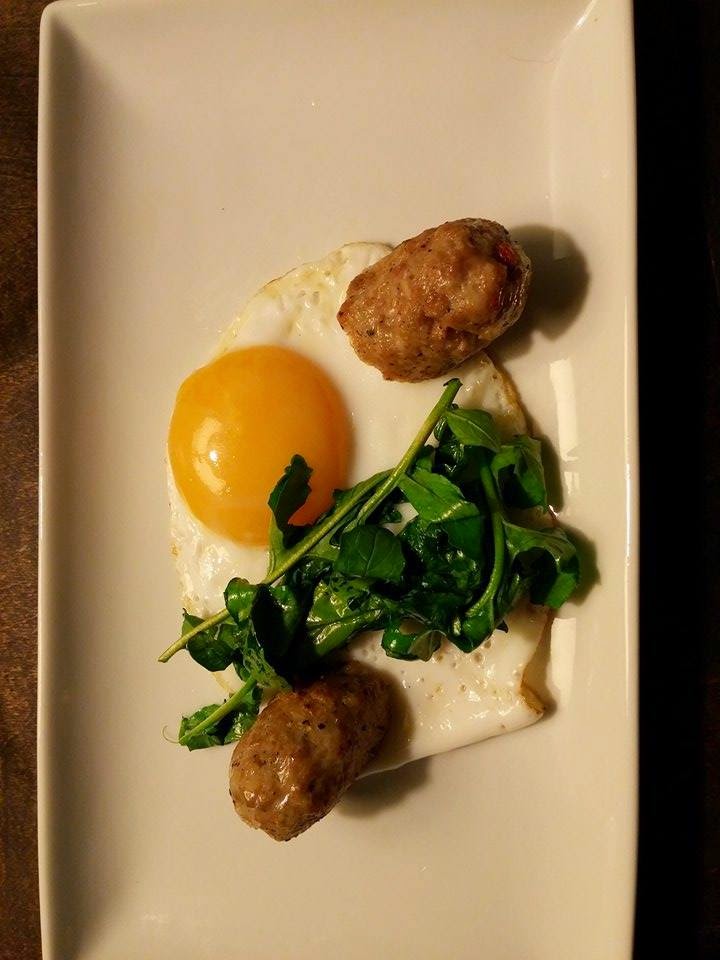 He's already gotten in the kitchen. That's a fried duck egg, arugula (from the garden) and homemade Georgia pork sausage.
See what I mean? See why he's called Chef Will? Good GOD! HE IS NOT IN MIDDLE SCHOOL YET!

So I don't have the slightest idea why I am feeling bitter/angry/slightly annoyed. It's been a beautiful day and I honestly don't have one thing to complain about. I'm cooking pinto beans with a hambone which is about my favorite thing to eat in this world and more greens from the garden and I have bread rising. My honey's doing very well and the boys are coming out to play tomorrow. And on top of all of this goodness, Dovie came out of the coop today and actually walked around some!

Maybe I'm just suffering from the ghost of PMS past. Maybe something I read on Facebook early this morning just pissed me off. Maybe I'm just...a human being. Maybe someone needs to come and snatch my wig off and yell BITCH!

Honestly, I hope that doesn't happen and it probably won't because I don't wear a wig and I haven't been mean to anyone that I know of.