Not My Normal Wednesday 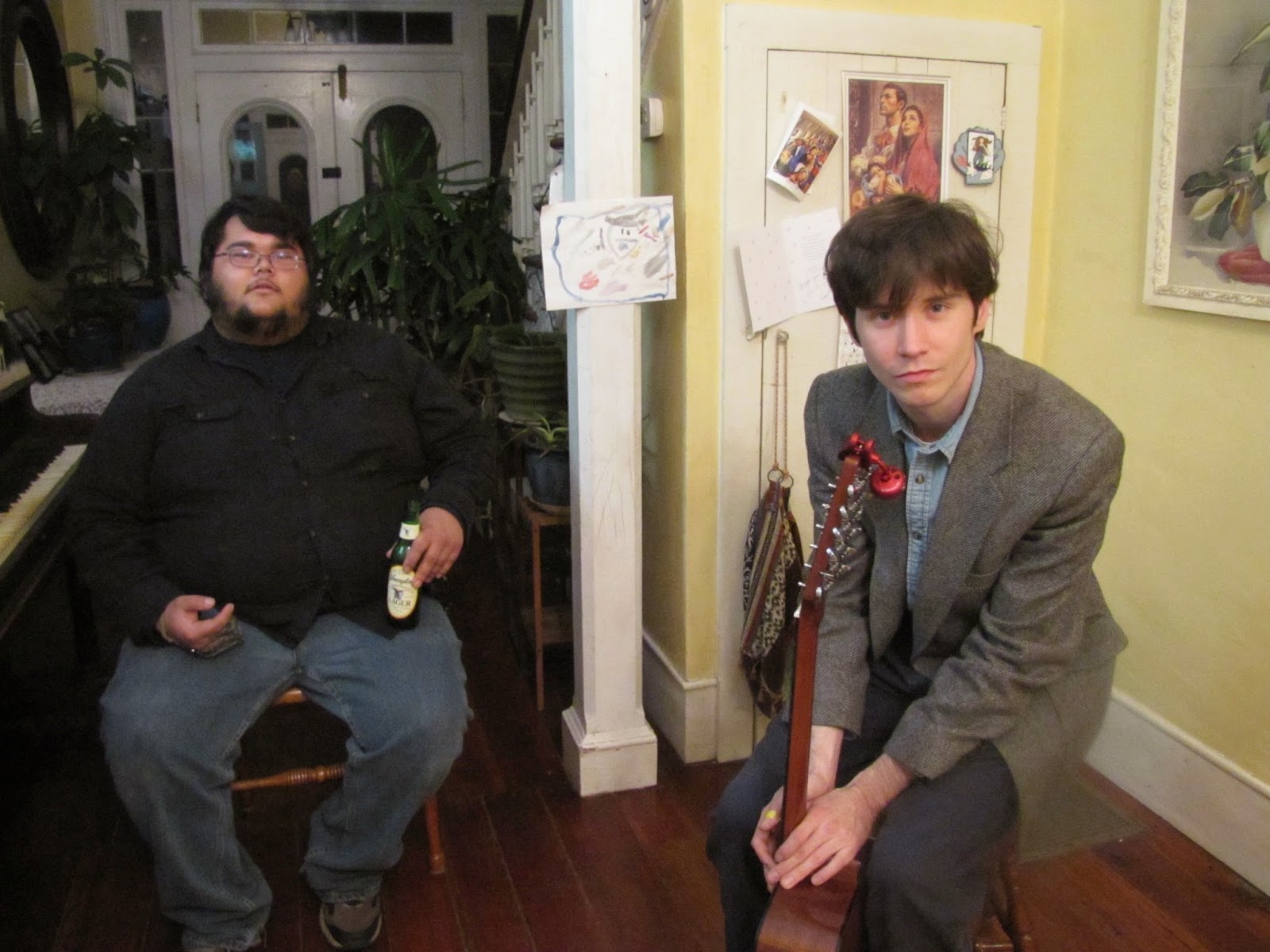 I just had the best visit with those two boys. They are (from L-R) Larry and Caleb. You know, for someone like me, having folks I like come to see me is just perfect. And they did and it was.
I served them leftover soup and also sweet potato biscuits with cheese, all toasted and nice, and we sat in the kitchen and we caught up. As I said in my previous post, I met these fellows at the Opera House about six years ago when they were still in their teens. They're grown up men now and have been through a lot.
Larry had an accident at work which resulted in losing three of his fingers on his left hand and he told me all about how that had happened. He has different prosthetics which are unbelievably cool. The ones he wore on Saturday were his cosmetic fingers. They look totally and completely real but don't do anything. The ones he wore today were his X-Fingers (real name) and they can do things. It was a horrible accident but he's doing all right and I sure am proud of the way he's adapted. Had to switch from being right-handed to left and he's in a lot of pain still (the accident pulled nerves and muscles and tendons all the way from his shoulder) but he has a Tens Unit and I think he's going to be all right. I told him about my grandfather who lost all the fingers on his left hand as a young man and that I wished he'd had some X-Fingers but such things were unheard of when Grandaddy was alive.

Caleb is a musician. And a very interesting fellow. A few years ago, or maybe last year, he went out west and herded sheep on a Navajo reservation which was an incredible experience for a boy born and raised in the deep south. Mountains and desert and living on a reservation and being taken in by the people there who wanted to adopt him and marry him into the tribe and he wants to go back badly. The music he loves is old time music and Woody Guthrie is his hero. He brought his 12-string and played some tunes in the hallway of this house and it was beautiful and I got to talk music with him and if you know me, you know I do love a musician. Larry used to play piano and has a gorgeous voice and so for a little while my hallway rang with that 12-string and voices. Caleb and I discussed the fact that we may be related and that was nice. I gave the guys a tour of the yard and we spent some time watching the chickens and ducks get ready to go to bed. They both loved my house, my yard, the chickens.
It felt so good to be able to share this with those boys. I told Caleb about friends of mine who are musicians and how they've managed to make music their lives and who support themselves. He said, "I'd love to have porches like this," and I said, "Well, you can."
It felt really good to be able to let them know that their lives can become a reality built on dreams.

When I took their picture I asked them if I could use their picture in the blog and they said I could.
I just feel really blessed that these men would take the time to come see me and when they left, they promised they'd be back. They thanked me for the soup and I told them that I love to cook for people I care for and they said, "Well, now we know."
And they do.

Mr. Moon is doing way better than I imagined he would be at this point. He's off to the basketball game. And here I am, chickens put up and the thick peace of the night descended. Dovie is still alive but barely. She spent the last two days in the coop and tonight I put her to bed in the hen house so that she would at least be a little warmer. I might have to bring her in tomorrow and put her in Mr. Moon's bathtub with little bowls of water mixed with vitamins. We shall see. I have a very strong philosophy that if an animal is really sick and needs to die, then I should let it go. But then I remember how when Elvis was a tiny peep and was sick and about to die, Mr. Moon fed him Centrum Silver mashed up in water with an eye-dropper and look at him now.

It's been a remarkable week and it's only Wednesday.

Hang on to your dreams. Know that you are stronger than you could ever imagine. Trust that if you buy a house because you know how incredible the acoustics in the hallway must be, folks will come and prove that to be true. Sweet folks. Good folks. And that you can feed them soup to thank them for the music.