Well, I think that Mr. Moon and I both have adrenalin hangovers today. He was awake half the night worrying about those birds and then got up at quarter to six and went out and fortified the door to the hen house and put straw in the new little nesting coop. Here he was working on it yesterday: 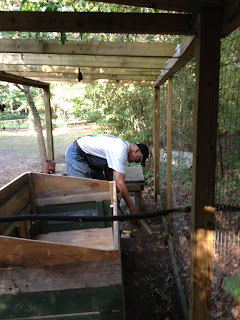 This is what it looks like all closed up and snake proof: 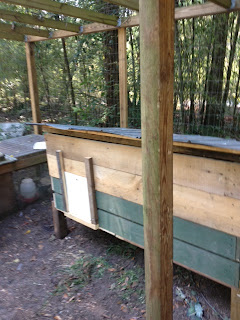 Of course, he's using all recycled materials. Not because we're cool but because that's what he has and what he wanted to use. Also- it's cheaper. As in, free if you already have it.

So the lid comes up and I moved Flopsy and the babies and the eggs over there today. I have no idea if we're going to get any more hatched eggs but the two that we have are mighty darn cute. 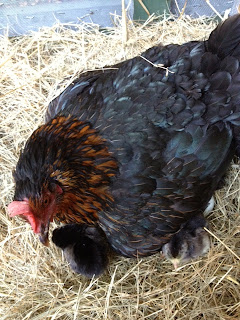 That is not an especially good picture but I think that if you click on it, you'll be able to see both babies. Plus, it makes Flopsy look all motherly and shit.

I've probably screwed up the entire hatching process by moving the eggs. I don't know. We don't have a freaking clue but from what I read, it's not a big deal. The mother will take care of the babies if we just protect them from predators.

So here I am with three separate groups of chickens to take care of. The grown hens and Elvis, the month-old babies and the mother-baby unit.

Now Jodi- this is for you: Yes. Chickens have sex. As I have said here many times, Elvis loves nothing more than to have sex. With his hens. Sex, sex, sex. Sex in the morning, sex at night. Sex in the middle of the day. You have to have fertilized eggs to get babies. Just like with humans except that with chickens the eggs are laid and then the baby develops outside the mother in that egg. No womb is involved. Just a nest. Which the mother sits on and keeps those eggs warmed and turned properly. It's like SCIENCE only she does it by instinct and doesn't know about science. But she sure does know about how to sit on eggs.

Well, since I started writing this, about fifty things have happened around here or maybe just a few but I've had my bowl of yogurt and pear and almonds. It was good. I heard a thing on NPR yesterday about how much food goes to waste in this country- like BILLIONS OF POUNDS A YEAR- and it made me realize that we need to be even more mindful of food waste than we are. Which means that when a pear goes brown on one end, I need to cut that off and eat the rest and I know- whoo-hoo! who doesn't know that? but still. There really isn't a whole lot of food that gets wasted around here. What we don't eat, the dogs or chickens do so it's not that bad. But for instance- right now I have a bunch of collards in the garden that need to be pulled because they are bolting and I SHOULD cook them and freeze them but I doubt I will. The goats next door sure would like them and our chickens love collards too, so it's not that big a deal but we have to think about these things. I weeded the beans yesterday and we're about to come into a ton of those. I think maybe there should be some potatoes to pull as well, the baby new ones, and if there is anything better than a pot of green beans and new potatoes, I am not sure what it would be. We just have to eat what we have when we have it and get over our First World Belief that we need to not eat the same thing too many days in a row. Either that or I need to freeze and can more.

As always, living in a house that's been here for over a hundred and fifty years, I think about what the people who lived here a long time ago did and I doubt that they had tomatoes in winter and when the Papa went out and shot a deer, they probably ate venison until they were sick of it but were glad for it anyway. They probably smoked a lot of meat. I imagine they grew collards, just as we do, and potatoes too. I'll bet that hogs were raised on this property and no doubt I am not the first person to raise chickens here. Or find snakes in the hen house. Did you know that pigs will eat snakes? Maybe we should raise a few pigs.
Nah. I did that once. It was not a pleasant experience although I am older now and could possibly do it better. I feel sure that Mr. Moon could build a smoke house. He can build anything. Lis and I were talking about how if we got bombed back into the stone age, if we could get together, between Lon and Mr. Moon, we could survive. Those men would figure out how to get water out of the ground and meat on the table.

And Lis and I could garden and make preserves out of berries that we picked. We'd figure it out. Just like the hen with her eggs and babies, if push came to shove, we would figure it out and keep body and soul alive.
Or die.
That's always a possibility.

Thanks for your patience.