It's A Good Morning

Well, good morning from Lloyd, Florida. It's another beautiful day here in paradise and once again, it's the time of year when I wish we could offer click-on-this-to-smell-the-picture because the Confederate Jasmine is blooming and the air smells like what I imagine French courtesans might smell like and honey, that's a real nice thing. 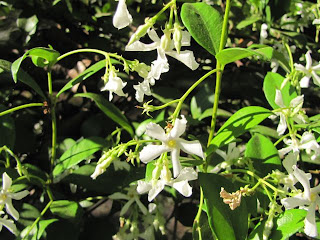 Such a tiny flower but there are hundreds of them. Maybe thousands. I don't know. Tiny white pinwheels of fragrance.

I made us some eggs and grits this morning and some of the venison sausage that Jason made from a deer he shot last year. It was tasty.
I talk about food a lot, don't I?
Yes. Yes I do.
Well, as a default topic, food has a lot to offer and is generally more interesting than the weather and yes, I talk about the weather a lot too.

Speaking of weather, it's pretty perfect here lately. Warm during the day, cool at night. Breezy and lovely and the humidity isn't bad. This will not last for long so we're soaking up every drop of it we can. The doors and windows are open and this sweet goodness pours in.
Now- could we use some rain?
You bet.

Okay. On to the garden. Here's a squash blossom: 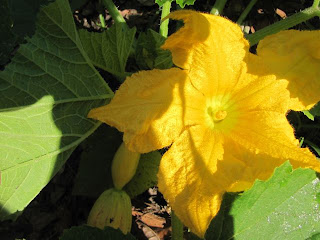 I know. You've seen squash blossoms before. There is nothing special about this one. You can see a baby squash growing behind it if you look. The other day, Owen and I were in the garden grazing on raw collards and mustards as we do 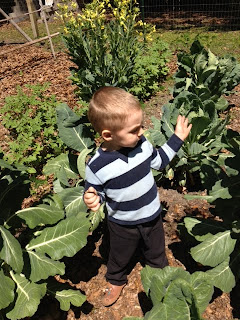 and I showed him the baby squash. "I want to eat it!" he said but I told him we had to let it grow. He agreed. He picked up the hoe and I showed him how to use it. He hoed for awhile and then said what I knew he'd say which was, "Phew. Hard work!" 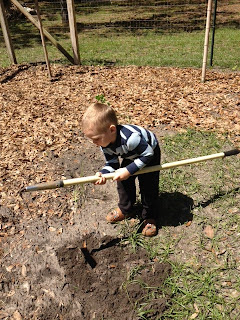 In this case, he's right.

Anyway, like I said, it's a beautiful morning and the skink was sunning on the back steps. 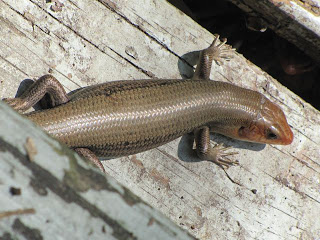 That's a skink. There are actually two of them who live under those steps and I didn't realize that until I saw them both together the other day. All skinks look alike to me but I'm sure if I were a skink, I would easily be able to tell the difference.
They're sort of odd, aren't they? Sort of snake-lizards. A bit off-putting. Not cute.
Okay. You get my drift.
I think that "skink" is a good name for them. Mr. and Mrs. Skink. They have my full permission to live under my back steps.

We've put the baby chickens out. 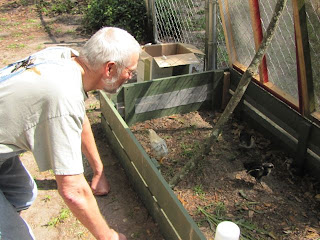 They love it outside. They run around and flap their wings and they can already actually fly. I think that banty chickens may have better powers of flight than your regular-sized domestic chicken. They take little short hop-flights and they could already get out of that pen if they knew they could but we put the screened lid down so they can't.

I picked them some sour flowers as the kids call them. Oxalis is their real name. They liked them. 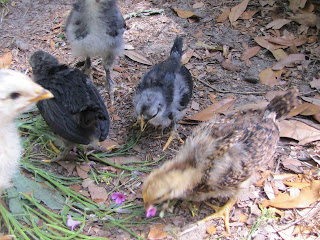 If there anything cuter than baby chickens eating flowers?
I don't know.
Maybe not in Lloyd today.

A good friend of Lily's is throwing her a meet-the-baby-shower today and I need to get into town and play with Owen and Gibson so their mother can do a little tidying in preparation. I'm glad this lady is throwing the shower because we're all so lame that we'd never do it. I myself had four babies and one shower. Well, party shower. You know what I mean. I'm sure I took hundreds of showers during those four pregnancies. Or thousands. I don't know.
Like the Confederate Jasmine blossoms, who would bother to count?

Well, it's easy to count the number of aloe blossoms. One per plant.
But they're big. 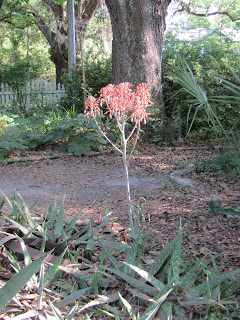 So that's pretty much it around here today. Mr. Moon is working on the boat now and I think we might take it out on the river tomorrow. Gibson can have his first boat ride. We'll drink cold soda and lay back and let Bop and Owen steer the boat slowly down the St. Marks river which is about as pretty a river as you can imagine. We might even get lunch afterwards.
Sounds good to me. I hope the swamp magnolias are blooming and I hope y'all are having a nice weekend.

The Punch Brothers are going to be on Prairie Home Companion tonight.

They're so damn cute.

Jessie- that's for you.

So anyway, I'll be listening and drinking beer and dancing around my kitchen cooking our supper tonight.

Maybe I'll put a sprig of jasmine behind my ear.

Let's all dance on.