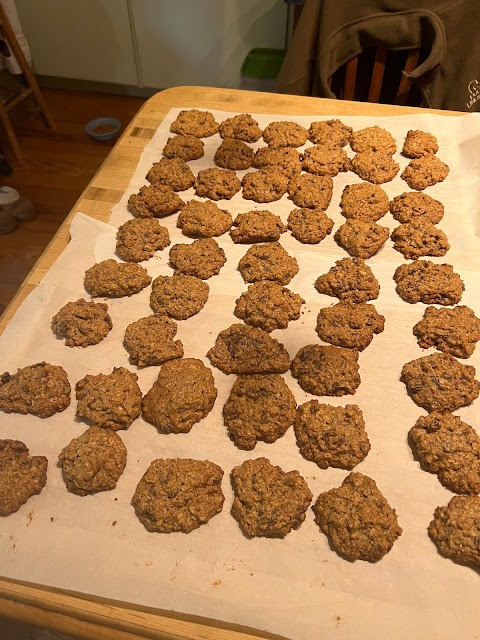 Today has been a day of mixed emotions mostly consisting of being a little sad that Mr. Moon is about to go off to hunt again mixed with a bit of apprehension about tomorrow's needle biopsy thing, even though I feel quite sure that it is not the sinister thing we were worried about. I an also apprehensive about the fact that the appointment is at 8:40 in the morning which is- well, too early in my opinion. But of course I must be there. He said I didn't but I do.

So I've been very sweet to him all day. Actually, I'm generally pretty sweet to him to be honest and he is very sweet to me. I like that about us. I made him a swell breakfast with possibly the best biscuits I've ever made. Last night I decided to feed my sourdough starter and instead of dumping out a cup of it to replace with flour and water, I made up a biscuit dough with self-rising flour and milk, the un-fed starter, and butter and let that sit in the refrigerator all night. I had no real idea what I was doing but this morning I mixed up a little more flour and buttermilk and a tiny bit of baking soda and gently kneaded that into the dough with sourdough in it and rolled it all out, cut biscuits, set them in an iron skillet and let them rise for awhile before I baked them.
Uh, yes please. They may have been better than angel biscuits and that is saying a lot. Easier to make too. I'll probably never be able to replicate the recipe in my whole life which is the problem with cooking and baking by touch, feel, and instinct.

I did a little ironing for the man and I made those cookies, too, which many of you who have been visiting here for a long time know about. I use the Quaker oats recipe for "Vanishing Oatmeal Cookies," don't add the cinnamon, and put raisins and chocolate chips and pecans in them. Thus- life-sustaining.
Levon and August came by their sweet tooths (teeth?) naturally. Their grandfather loves these things.

Okay. Here is something that excites me and brings me great joy. 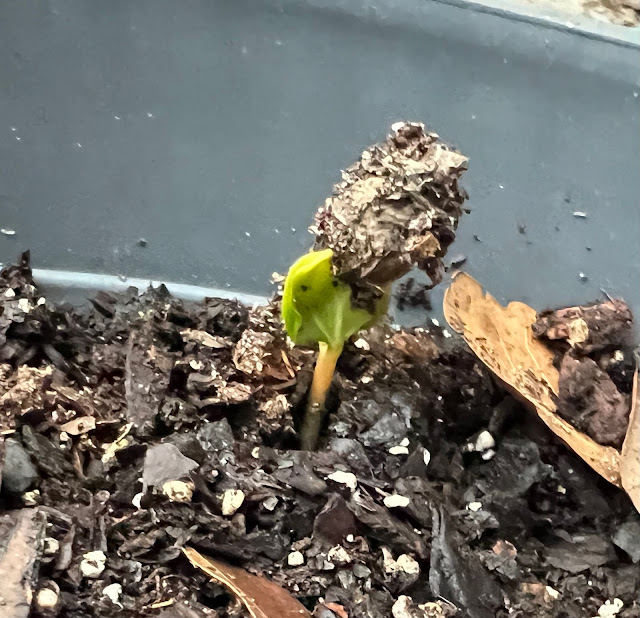 I doubt that anyone has any idea what that is so I will tell you: When we were down in Roseland in October the sea grapes were full of fruit. Sea grapes are a protected plant in Florida as they grow by the coasts and protect the dunes and waterline. I grew up with them and have always loved them. When grown, they look like this. 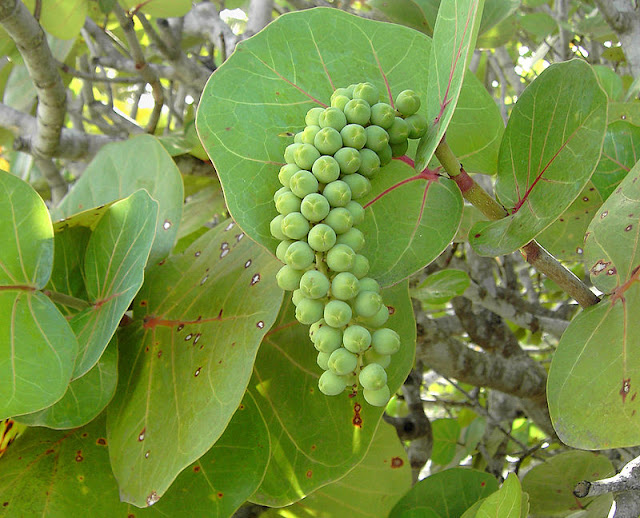 The fruit is not a true grape but it is edible either raw or made into jams. It is illegal to even pick them to eat, though, so I may or may not have broken the law by gathering a few of the dropped fruits when we visited a museum down near the Sebastian Inlet where they were growing. I wrapped them in a paper napkin, brought them home, and planted them in a plastic nursery pot. For two months I have kept them watered and have seen no signs of sprouting until today when I saw that tiny, tiny sea grape leaf with its jaunty hat of the seed hull. There is another one too, which has broken through.
I can't even tell you how happy I am to see these brave little sprouts. I may not be able to actually cultivate the plants here- they probably need at least a modicum of salt in their diet and Lloyd is notably short on that. But, the fact that they have sprouted means a lot to me.
And now I'm going to go make a grouper supper and go to bed early so that I can get up at some ungodly hour. Yes. I am a spoiled old woman.
I will report in tomorrow.