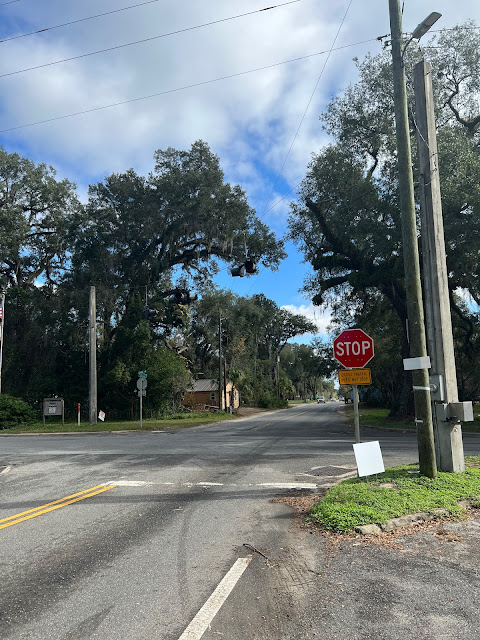 Mr. Pudding asked me some time back to post a picture of the one traffic light in the county which is less than a block from our house and today, as I was walking back from the post office, I did. The funny thing is, you can't even see the light! It's sort of a "Where's Waldo" situation or in this case, "Look For The Light!" Can you see it?

If you look directly beyond the stop sign, you might be able to see a sliver of the very blue My G-Word Soul Boutique. And that building across the street from it is in the process of being rebuilt from what used to be a pretty falling-down shed-like structure. I believe it is going to be an electrical company. What's the term for that? You know- a business that has electricians. But they are doing such a beautiful job on it that I'm not sure. The siding is lovely wood, the roof brand new metal. Much finer, in fact, than what many people around here live in.
So that's the view from the traffic light, anyway, looking from west to east. I live a few hundred yards east of that spot.

I went to town today to get my shopping done. I also had to pick up a prescription at the compounding pharmacy. Since Jessie only lives a few blocks from there, I stopped in to say hello very briefly, and then went to a local business called Care RX. I've driven by there at least a hundred times as it's on a major intersection but never been inside. I had heard that they would do the covid bivalent shots on a walk-in basis and trying to make an appointment at Publix pharmacy was not working out because I never think about it until I'm headed into town and you can't make a same-day appointment, usually. So I stopped at the Care RX and went in and it reminded me of a Mexican pharmacia a little bit. They have lots of products like splints and braces and compression socks and your usual drug store things like supplements and shampoo and toothbrushes and OTC remedies. So far rather normal. And behind the counter were shelves and shelves and shelves of drugs looking quite organized and professional but it was NOT like your usual chain store pharmacy. The main pharmacist was so jolly, talking to his customers, even singing, and the other people working there were just so...happy! And kind. And helpful. It turned out that one of them was best friends with one of Miss Martha's daughters. Miss Martha used to be our postmistress back when that was an actual position and her mother-in-law lives about a quarter of a mile from me and actually, so does Miss Martha but in a different direction. I filled out my form and gave them my driver's license and my Medicare card and they asked me to wait a moment so I did. I came across this on the wall. 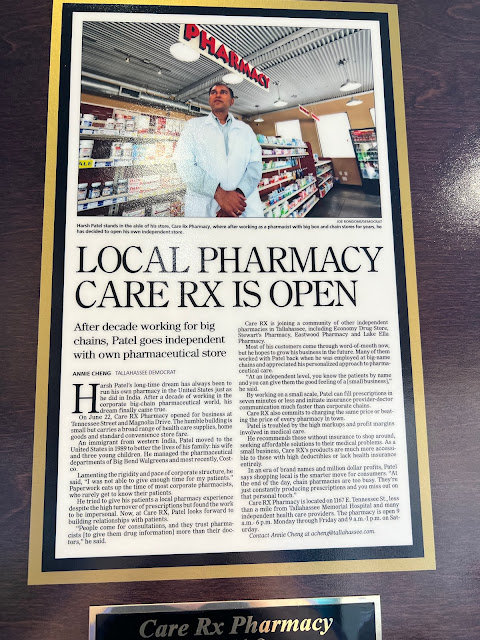 That was the article printed in the paper when they opened. From it I learned that Mr. Patel immigrated from India with his family and worked at the chain store pharmacies and then decided to open his own independent business. And I am so glad he did! One of the things I remember from nursing school is that pharmacists are one of our most underused medical experts. They are a font of knowledge about the medications we are prescribed and I love that Mr. Patel wanted to be able to spend time with his customers and to be able to really talk to them, to build a relationship.
He gave me my shot and I swear, I could not feel the needle slipping in. I told him how much I admired him for opening his own business and he told me that he is so happy there. That the five years they've been open has gone by so fast. "You have to be happy!" he told me. And I think he is.
So that was a very nice experience and when I was out the door and almost to my car, I heard, "Mrs. Moon!" and turned around to see him with a calendar for me.
I thanked him and said, "Take care!" and then I laughed at myself because "Care" is part of their name. He was already back in the store, serving another customer. 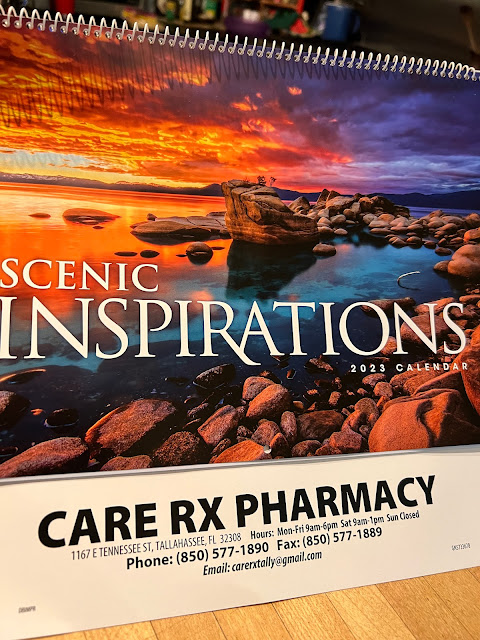 I love it!
And then- because I was so hungry and because the lunch we had yesterday left me craving the Pitaria's vegetarian platter, I drove myself there and ordered one. It was every bit as good as I wanted it to be and I brought home enough for lunch tomorrow.
Then on to Costco and to Publix where I ran into a friend and talked and talked and by the time I made it home, it was four o'clock in the afternoon.
Another day sliding by like a leaf on a swift river. I swear.
When I got back to Lloyd I took another picture of the stoplight coming in from the interstate. 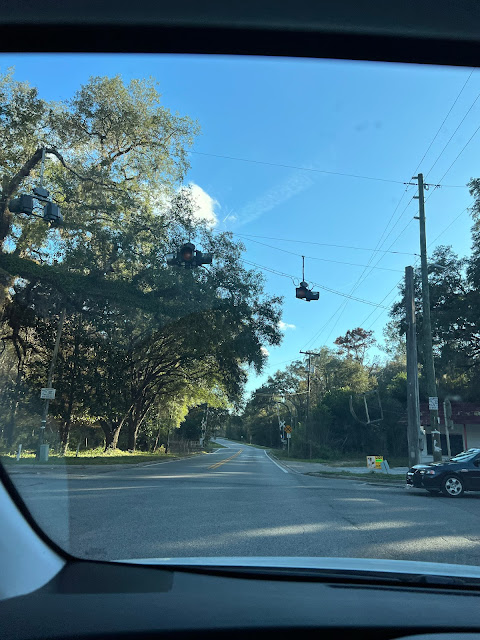 I took this one from the car and that is the north/south view. I was about to turn right where that car was waiting.
At least you can see the traffic light in this one.
And that's what life has been like today for me.
It's funny how when you live a rather small life almost anything can be an adventure, an opportunity to have new things to learn, to think about, to enjoy. On a good day, at least. And today was one of those.
And now I'm going to go make fish tacos which, believe it or not, I have never made before. See? New things.
And guess what? I forgot to buy cilantro.
Oh hell and oh well. We will live.
Love...Ms. Moon
Posted by Ms. Moon at 6:25 PM