My oldest friend whom I met in the 6th grade, which means we've known each other since Christ pooped his diaper, called me this morning. It was awesome. We caught up with family and stuff and as always, there is a sense of the continuation of the fifty-something year conversation we've been having since Girl Scouts and slumber parties where we all watched The Man From U.N.C.L.E. and tried different Slicker lipsticks. 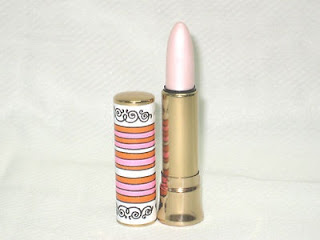 Just the sight of that case makes me swoon. I think that if I could smell a Slicker lipstick it would kill me with the overwhelming nostalgia it would produce.

Anyway, yeah, we've known each other a long time and we had some laughs and we ended our very, very long conversation with "I love you's!" and they were heartfelt.

And then.
AND THEN...
It was time to venture out of Lloyd for the first time in well over a week. I did go to the Hilltop yesterday but that's only about four miles away.
Mr. Moon's been great about stopping at Publix to pick up what we needed while I was sick but he's not the grocery buyer in the family, I am, and as such it's hard to simply write out a list without the need for many explanations and so forth and so I've just been asking him for the basics and it was time to replenish the pantry.
Not that I have a pantry but you know what I mean.

So I went to Publix. MY Publix. Anyone who lives in a town with multiple Publixes finds themselves at different ones sometimes but we almost all have what we consider to be our own Publixes where we know the employees and can find everything on the shelves blind-folded. MY Publix is the Publix where Lily works so I also have the benefit, when I shop there, of employees being extra friendly to me, knowing that I am Lily's mama. Which I like.
The first thing that happened was that I was standing by the BOGO bins contemplating buying some Pepperidge Farm Milano cookies. There was a big guy standing across from me, doing the same thing. He was somewhat hairy and wore a ball cap and as I said, he was largish. Being my friendly self I said something like, "If I buy these for my husband he will love me so much but he'll also fuss at me because he doesn't think he should eat them."
The guy looked at me and said, "Yeah, but you'll be the heroine if you do! Plus- buy one get one free!"
"I know," I sighed, and got two bags and put them in the cart.
And then, something happened. I do not know how it happened but somehow between the BOGO's and the imported cheeses, which is a distance of about fifteen feet, he decided that he should probably tell me how he makes his own bacon from pork butts.
Okay.
And then he did. Which took at least ten minutes and of course I'll never remember what he told me as it involved many ingredients for a rub and X-amount of time for curing and for smoking and on and on. Pictures from his phone were involved. He was so enthusiastic that I just couldn't be rude to him. After he told me all about the bacon, he gave me a lagniappe on how he makes his venison jerky and oh, something else which involved London broil.
"My, you certainly do love to cook!" I said. I did not add "meat" but that appeared to be his main interest.
"I don't look like this because I'm just a spectator!" he said with not a small amount of pride.

And so there was that and I finally got away to shop only to discover that in the time I've been gone from real life they have completely rearranged the placement of almost every damn thing in the store. The first aisle, where there used to be canned vegetables and spaghetti sauces and pasta and rice and beans was now the BREAKFAST aisle.
WHAT THE FUCK!?
It wasn't the end of the world or anything but it was disconcerting.
And by the time I got out of the store I'd been there an hour.

After that I rushed home and put everything away and ate my lunch and did some ironing, got the clothes off the line, gathered the eggs, picked a few greens from the garden and unloaded the dishwasher.

And now, I am tired. I'm not back to full-speed yet by any means although I feel SO much better.

I am going to cook with a recipe tonight. I have thawed an entire lovely red snapper and am going to attempt this. 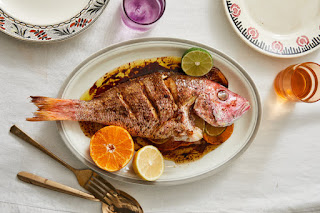 It's a New York Times recipe for whole fish with soy and citrus. I bought myself a subscription to their cooking newsletter and recipes and I am enjoying that so much. As I have said before, the hardest part of cooking for me is always figuring out what to cook and this helps.

And that's the news from Lloyd today where it was another gorgeous day although I see it's going to rain tomorrow and get down into the twenties tomorrow night.
Whoa!
Well, it is winter, after all and when I read about the temperatures they're experiencing in the midwest I have to wonder how anyone there survives. I couldn't.

And now I believe I've talked enough. Let me know if you have anything to say. I'd love that.