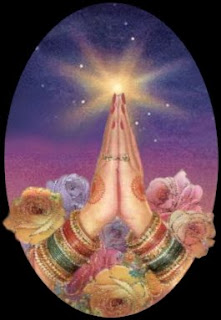 I go to yoga classes at my teacher’s house which is right down the road from where I live. I love my yoga teacher for many reasons, not the least of which is that she was the one who got me started in this practice which seems to be exactly what I need to stay flexible, to stay balanced, to try and stay centered but I have to say that she and I could hardly be more different if we'd been raised on two separate planets.
When I first met her, I was somewhat astonished that she was, indeed the teacher. This was a flash-first impression and frankly, after a year, I’m still sort of shocked. She fits none of the yoga-teacher stereotypes I’ve ever heard. She’s not a former or present hippie, she doesn’t talk about colonics or chi, she doesn’t wear her hair in a long braid, she doesn’t wear batik or filmy gauze things and she’s not a vegetarian.
What she is though, is the mother of three very successful grown children, the wife of the man she’s been with forever, a practicing Catholic, an award-winning quilter, and a Republican.
And of course I’m a past and present hippie, for all intents and purposes an atheist, and if there were a party more liberal than Democratic that had a chance at election, I’d be in it.
I hang everything on my walls from aprons and hula girls to hats and cool shirts while she hardly even has pictures hung on hers and the ones she does are mostly of her children.
She’s a member of the Garden Club and the Woman’s Club and I don’t know what all kinds of clubs while I refuse to consider being in any organization having the word “club” in it’s title.
I’m a die-hard Mac user and her husband actually WORKS for IBM. I think. I’m pretty sure that Bill Gates is his ultimate boss.
She and her husband are avid Gator fans and I couldn’t care less about any team anywhere in the world and although I went to FSU and have a degree from there, I would only be slightly more apt to put a Seminole sticker on my car than I would be to put one of George Bush on it, which is to say- none whatsoever.
So yes, we’re two completely different people and lately I’ve been feeling out of sorts in yoga. Why, I find myself wondering, am I coming to this class where this woman and I have absolutely nothing in common? Her class is long on talk of our “cores” and short on “oms.” Frankly, I could do with a little more oming. Once she said, “And now we’re going to chant,” which I got sort of excited about, but then I realized she was joking.
This is not spiritual yoga except that we do sort of transcend ourselves sometimes and we do say Namaste at the end of class.
So yesterday, when I found myself feeling a little pissy about things, I realized that I need to check my damn ego and remember that this woman is doing and has done quite a bit for me. She cares about me and she cares about my yoga practice and for crying out loud, if I can’t appreciate that and get over myself then how can I expect peace in the middle east?
Well, I don’t really EXPECT peace in the middle east, but some secret part of me retains the slightest hope that all mankind will beat their swords into plowshares and come together to chant, if not Kum Bah Yah, than at least a tiny Om here and there.
But as a cynical and realistic person, I know this is not going to happen in my lifetime and I know that my yoga teacher and I are not alike in very many ways but darn it- we can come together in her living room where the sun spills through her windows and we can balance on one foot and we can stretch our hamstrings and yes, we can use our core muscles. And we can do this together and we can agree on the pleasure and the need for all of that.
And I can respect her for what and who she is and what she believes, even if it’s mostly diametrically opposed to what I believe.
And we do have common ground that goes beyond yoga. We’re both mothers. We both love our children and our husbands and we both hold our families to be of the utmost importance and neither one of us wears gauzy clothes.
And I could Om on my own if I really wanted to.
I don’t think she reads this blog but if she does, I want to say this:
Thank-you. Thank you for all you’ve given me and all you do give me. Thank you for telling me to straighten my back, to bring my shoulders down and for offering me recipes. Thank you for allowing me to come to your home and do yoga.
The Divine Spark in me goes out to the Divine Spark in you and I know that to be true.
Namaste, Yoga Teacher. Namaste.
Posted by Ms. Moon at 8:53 AM