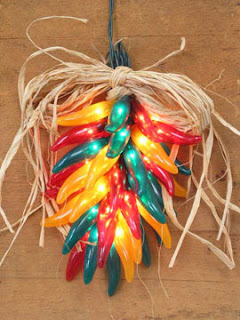 I just spent a good part of the day with my friend, Billy, which is always a delight and a pleasure. Today we went to Monticello and had lunch at the Mexican restaurant and then went to the place on Highway 319 that has tons of cool Mexican stuff including a tiny merry-go-round that I desperately want for my yard but will never get because it costs $1500. We did buy a ristra of red, yellow, and green peppers for Billy's Maw-Maw and Paw-Paw because their house in Kentucky burned down and they lost everything in it, including Maw-Maw's ristras, and this one is for the new home they are about to begin building.
Billy and I always have a great time, no matter what the circumstances, as long we're together.
We're friends. Real friends.
But here's the funny thing- if you put me and Billy and fifty other people in a room together and asked someone to pick out the two people least likely to be friends, they'd probably pick me and Billy.
For starters, he's younger than my son, whose best friend he is. He's also tattooed and pierced, which I am definitely not unless you count my earring piercings. Billy loves country music, which leaves me cold, and he pretty much hates Bruce Springsteen whom I adore and I think he even hates John Lennon but he loves me too much to admit that out loud. I eat mostly vegetables and Billy would live on bacon if it were humanly possible while most vegetables make him sort of want to throw up.
And yet, and yet....
This person is someone I adore.
Now why is that?
There are so many people I meet with whom logically I should be friends. People with whom I have so much in common. And yet, I just don't feel the love. I'd rather go to the dentist with Billy (which I have done before) than go to Paris with a lot of people I know and logically should be friends with, but I think this friendship stuff has everything to do with the heart and nothing whatsoever to do with logic.
Because appearances and age and all that other stuff don't mean shit to the heart. You meet someone and your heart sighs a little and says, "Good one, here," and you just know that this is a person with whom you can trust your real and honest self with and your heart throws open the door, flips on the porch light, and slings the welcome mat down and next thing you know- you've got a friend you love.
If you're lucky.
And if you know Billy, you are. Because not only is he one of those people, so is his wife, so you sort of get two for the price of one.
There are all sorts of lotteries in life.
If you're Billy's friend, you've won a big one.
Which I have, and I'd like to thank my son's wise heart for buying the ticket that brought not only Billy into our life but his mama and his wife and his sister and his grandparents, too.
They're all the sort of friends that are more like family.
Family of the heart. Friends of the heart.
The wise and happy heart that defies logic and knows joy when it sees it.
Posted by Ms. Moon at 4:09 PM